Eleven people were injured on a jam-packed highway in Istanbul, after the driver lost control of a Mercedes bus and left the bus lane. The man behind the wheel was allegedly involved in a fight with a passenger. The angry traveller assaulted him with the umbrella, shortly before the vehicle slammed into three cars on the motorway.

The passenger got into an argument with the driver Recai Türkoğlu over the opening of the doors at a previous bus stop at around 8:30 a.m. this morning. 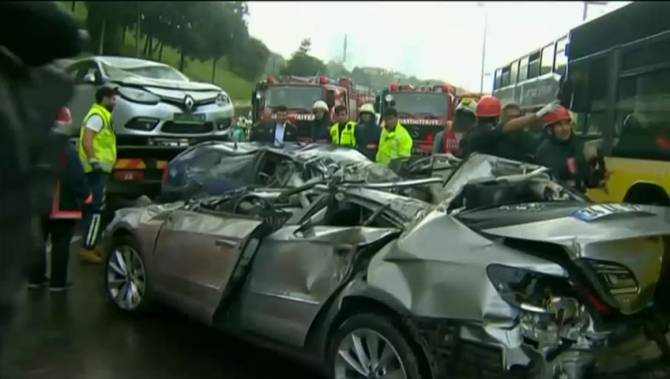 Witnesses claimed that the passenger, identified only as Murat A., hit Türkoğlu in the head with an umbrella, causing him to lose control of the steering wheel and swerve out of the lane, ramming into three cars and another bus before coming to a stop.

Eleven people, including the bus driver, were hurt in the accident, but none suffered life-threatening injuries, paramedics said. They were all admitted to hospital. The aggressor was taken into custody for further investigation. The police needed two hours to restart the traffic flow. Television footage shows that at least three cars were crushed beneath the weight of the Mercedes bus and needed to be towed away.