Bittersweet – Hamilton wins in Hockenheim, Rosberg stays off the podium

Lewis Hamilton strikes again! The Brit wins in Hockenheim after a flawless race. It was a bitter-sweet run for Mercedes-AMG PETRONAS, as the crowd’s favorite, Nico Rosberg, only finished fourth.

It was a tragedy start for Nico Rosberg, who fails to keep his leading position on the grid, but also dropped to the fourth spot, trying hard to overtake Daniel Ricciardo and wasting time, while teammate rival Lewis Hamilton is hitting fastest laps on the racetrack. Max Verstappen is the man with the mindblowing start in Germany, as he flashed to the second position. 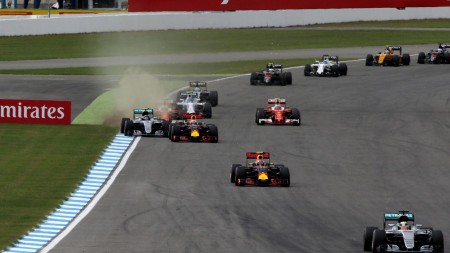 Nico takes the super softs again, but the mechanics needed 3.5 seconds to put the tires on and the German returns on the racetrack in the 8th spot. “It’s hammer time”, Hamilton is told from the pits and he goes in to change and soon gets his lead back ahead of Red Bull’s Max Verstappen. 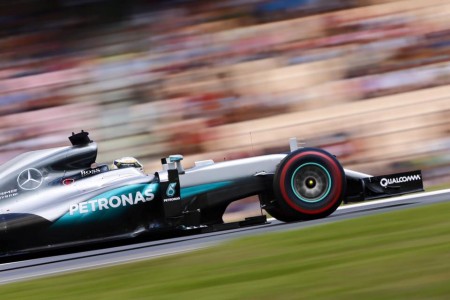 Rosberg is struggling to reach Ricciardo. The fastest laps that he hits are not much of a help, with Lewis already having over 10 seconds at the front. He changes to softs and overtakes young Verstappen, right after he is told to “Push hard”. But just like in Austria, when he was battling Hamilton, the German brakes too late again in turn 6, and the Dutch complains: “He pushed me off the track.” The stewards investigate the incident. At his home Grand Prix, Nico receives yet another blow: he is to drive through or stay in the pits 5 seconds more when he boxes again. The team opts for the second.

“Can you tell them I was at full steering lock?” Rosberg asks. “He moved under braking, that was the big problem. That’s completely not allowed…”.

In the 46th lap, Nico serves his penalty and puts on the softs that will keep him on the rack all the way to the end, in his chase after points. 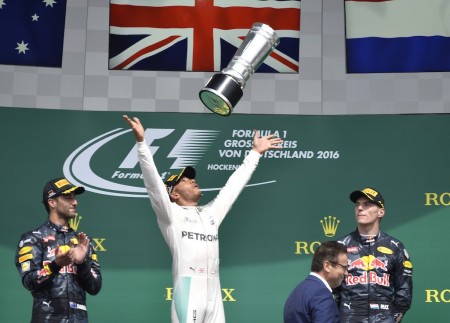 There is complete chaos at Ferrari, after the departure of James Allison, the technical director. The team asks Sebastian Vettel to box repeatedly. The German driver though refuses again and again to pit, saying his tires are still good. Eventually, his team agrees to let him out for as long as he wants.

At the front, Hamilton, interested in Nico’s pace, picks up his own and lets Daniel Ricciardo far behind, with a gap of more than 8 seconds, with 13 laps to go. The Mercedes-Benz Chairman, watched everything from the team’s garage.

The 3-time world champion is the first to pass the finish line after a flawless race. Daniel Ricciardo and Max Verstappen from Red Bull will be with him up on the podium, while the former leader of the world ranking, Nico Rosberg, down on his knees. There are now 19 points between him and the Brit.

On the podium, Lewis throws the trophy up in the air and Daniel Ricciardo shocks the crowd as he drinks champagne from his shoe!

The head of the Mercedes-AMG Motorsport, Toto Wolff, admitted that the team had a stopwatch failure on Nico’s slow pit stop, so he served more than a 5-second penalty. Wolff also failed to hold his anger back and used some… bad words on live TV.

It’s the summer break now, so we will meet again with Mercedes-AMG PETRONAS and the best Formula 1 drivers by the end of August, in Spa-Francorchamps, for the Belgian Grand Prix.