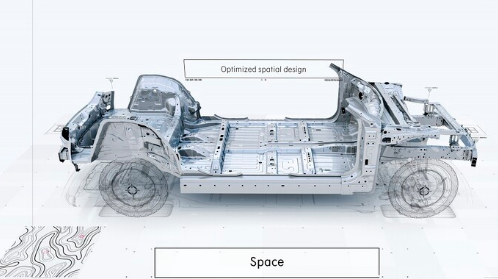 Smart SUV will be the first model resulting from the new partnership between Geely and Daimler. It could debut in September 2021 at the Munich Motor Show if it takes place and is available in 2022.

With the help of Geely, Daimler is trying to make a profit from the smart brand that has been at a loss for 20 years. Smart gave up conventional propulsion in 2020 and will be a 100% electric brand owned by Geely and Daimler who entered into a partnership in January 2020 following which each contributed 350 million euros to revitalize the brand.

Smart SUV will be the first model of the new joint venture, is known under HX11 code name and will be built on the SEA (Sustainable Experience Architecture) platform. With a length of 4 meters, it will be the largest smart model in history. The propulsion will be provided by an electric motor of about 250 HP that will drive the rear axle while the battery of almost 70 kWh will give a range of about 500 km NEDC.
According to the partnership between Daimler and Geely, the model will be produced in China and will be sold in both China and Europe.

At the end of last year, mercedesblog presented the first sketch of the new platform published by Daniel Lescow, Vice President of Global Sales, Marketing & After-Sales at Smart Automobile Co., Ltd, on his Linkedin account.

The new smart SUV would be presented at the Munich Motor Show on September 7-11, 2021 if it takes place and is not canceled due to the coronavirus pandemic. Smart SUV will compete in the lower segment of the small SUV class but smart will continue its presence in the A segment.
German car magazine auto motor und sport informs that a new smart EQ fortwo will be launched in 2024. Currently, smart EQ fortwo is still being produced at the plant in Hambach, France, which Mercedes recently sold to Ineos, which will produce here the Ineos Grenadier model.
Until the start of Grenadier’s production, Ineos will continue assembling  smart EQ fortwo.

Instead, the fate of the smart EQ Forfour, which takes place at the Novo Mesto plant in Slovenia with Renault Twingo under Renault management, is uncertain.

By deciding to turn Smart into an electric brand, Daimler returns to the basic idea of ​​the inventor of the Swatch micromobile, Nicolas Hayek. And with the help of Geely, which will ensure cheaper production in China, it hopes to make the smart brand profitable. Will this be possible with just two models, a mini SUV and a two-seater mini?