“Airport, please! As fast as possible!” How many times have you said that to a cab driver? But if your taxi would be a classic Mercedes-Benz, would you still be in a hurry? Or would you try to prolong the experience as much as possible?

You are cordially invited on a journey through time, onboard the Mercedes-Benz taxis, from the first motorized cab as the Daimler Landaulet taxi all the way to the legendary “Fintail” model of the 110 series.

It all began with a motorized cab 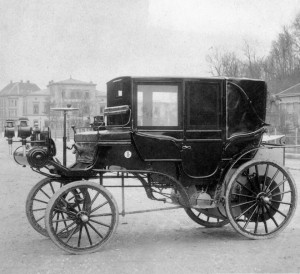 In 1896, a Stuttgart carriage entrepreneur Friedrich August Greiner orders a Daimler Victoria motorized cab. The vehicle was delivered to him in May of 1897 and immediately went into operation. It featured a taxi meter and innovations that were unbelievable back then: a heating system for the cold weather and the possibility of removing the movable parts such as roof, doors and windshield wiper to enable ventilation in summer.

Time passed and a innovative vehicle with electric propulsion hit the road. It was the “Mercedes Electrique”, with its electric engine powered by a battery. No bad smell, no loud noise and good looks made them as reliable as the petrol models. Well, except for the range, of course: only 90 kilometers on tap, at moderate speeds of about 30 km/h. Anyhow, the top speed allowed in cities was of 15 km/h back then.

In 1908, a 10/18 HP model was delivered to Prince Waldemar, a nephew of the German Kaiser Wilhelm II. The vehicle was the first ever made in the new factory in Mannheim. One year later, the robust and resilient 10/18 HP motor cab, with the special “Berlin Cab” body comes to enjoy great popularity, especially in Berlin, and is therefore widely used. 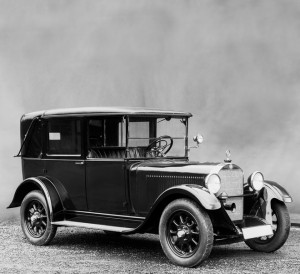 By early 1927, an 8/38 HP model came out as a result of the merger of Daimler-Motoren-Gesellschaft with Benz & Cie. It didn’t take long until the 2-liter engine vehicle found its way on the road as a taxicab.

Later on, derived from the 8/38 HP model, the “Stuttgart 200” got its designation from the fact that it was built only in Stuttgart and was fitted with a 2-liter engine.

1936 was the year of the Mercedes-Benz 260 D, presented as the new kid in town at the Berlin Automobile Exhibition. The car with the diesel propulsion was the world’s first serially produced diesel car. It was economical and solid, just right to become the taxi drivers’ sweetheart not before long.

And it was not the only gem of the Berlin Automobile Exhibition that year. The Mercedes-Benz 170 V model saw the light of day. With a skyrocketing popularity, the automobile soon became the most frequently built Mercedes-Benz passenger car and production star of the pre-war period, but also a major hit beyond borders.

And then, there was the “Ponton”…

A “3-box design”, fully integrated bumpers, a rectangular body plan, with the passenger and rear sections standing out as cuboid-shaped spaces. That was the 180 model of the 120 series, the “Ponton”, an icon in the Mercedes-Benz history. 442,963 units of the 180 to 190 D were built up to October 1962, when production ceased. 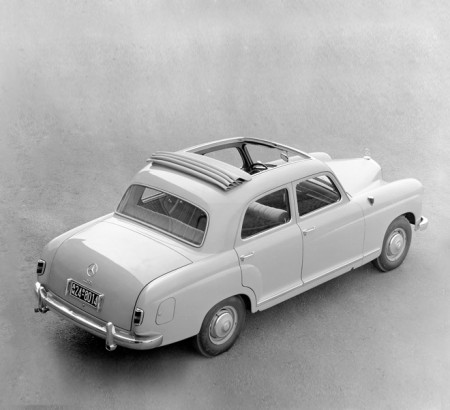 In August 1961, striking as never before, the “Fintail” models of the 110 series bring state-of-the-art technology onto the market and into the taxi business. Wide doors that facilitated access, generous interior space, plush seats with attractive upholstery and a spacious luggage compartment were the aces up the models’ sleeves all the way to 1968, when the new models “Stroke 8” saw the light of day.

The Mercedes-Benz 115 and 114 series represented the moment the company left the “fintail” behind, in 1968, with the car affectionately called “Stroke 8”. 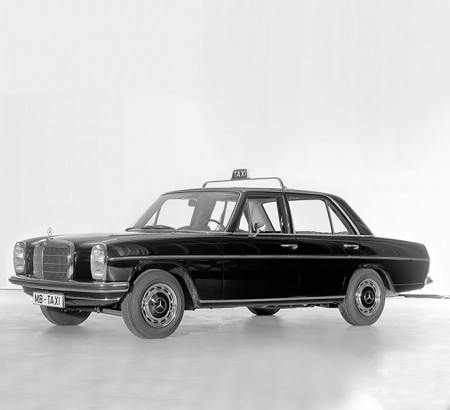 The Mercedes-Benz with the highest mileage ever known is a 240 D taxi built in 1976 and sold in Greece, to a taxi driver. It covered a total of 4.6 million kilometers. Such stories give the “Stroke 8” the reputation of an indestructible soldier.

In January 1976, the 123 series came out as the successor of the “Stroke 8”, but production for the predecessor did not stop until late 1976. The demand was too high to stop. Almost two million examples of both model series were produced between 1968 and 1976.