Black Velvet – How will this SLS AMG make it through the winter?

Vinyl wrapping is out, velvet is in! From Ferraris to Bentleys, they have all tried it out. And then, it was the turn of the Mercedes SLS AMG to dress up in a velvet suit. This was the first ever SLS to get velvet wrap and it was spotted in Frankfurt. But how is it going to make it through the rainy fall and the snowy winter of Germany?

“Black Velvet and my little boy’s smile” says the blues-rock song performed by Alannah Myles. But there’s surely a big boy behind the wheel of the beast and the black velvet is not a horse like in the 1989 video, but a horsepower. 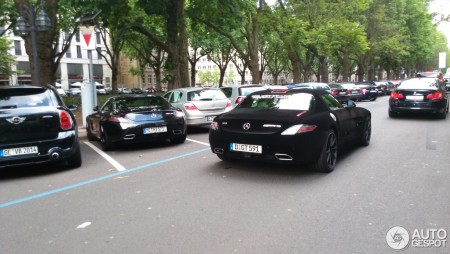 There is no word on the technical upgrade for the already powerful Benz, but by the bass-heavy sound it produces, it might have some extra power under that velvet bonnet. This car might have a velvet touch, but it comes with iron fists. The 1695 kilogram vehicle carries around a massive 6.3-liter engine roaring out a standard 583-horsepower and 650 Nm of torque. We know velvet is heavy, but the SLS might still run the 0-100 km/h distance in 3.7 seconds and reach the 320 km/h top speed as on paper, due to the supposedly revised engine.

Thecarhotel Photography was the first to ever spot the car in Frankfurt Germany and immediately posted it on Facebook. From that moment, the SLS turned into a major prey, with amateur car hunters snapping photographs of it all around the country. We’d absolutely love to see a photo next spring, just to check how the SLS survived the winter. Good luck with that!