A video gone viral, showing a truck driver bullying the driver of a Mercedes-Benz E-Class along a high-way in Hong-Kong, infuriated the internet users worldwide. The living road-bomb, known under the name of Chung, was recently arrested for the incident.

The 39-year old will now face charges of criminal damage. The video incriminating him has been submitted to the local police station together with a complained filed by the Mercedes-Benz driver whose car had been hit apparently on purpose.

The driver of the pink box lorry bullied him from behind along a narrowed road partially under construction in the New Territories district of Hong Kong, on July 1st. 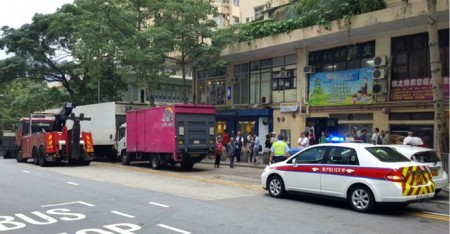 The truck driver sped recklessly and overtook the Benz. He started changing lanes frequently to confuse the driver behind him and scare him. The Mercedes tried to stay behind and let him get away, but eventually, the truck driver stopped and reversed straight into the front end of the Mercedes sedan.

The man called Chung did not even bother to stop and drove away from the crash scene. A dash-cam installed in the Mercedes showed the truck driver fleeing in the direct of Tuen Mun and represents strong evidence against the bully.

The police launched an investigation to find the living “road bomb”. The officers found him in the Kowloon Hospital, treated for being emotionally unstable and having a history of drugs.

Chung is now in detention in psychiatric ward of the hospital.

Soon after the video went online, two more victims of the dangerous driver uploaded their own videos of him along the same Castle Peak Bay section of Castle Peak Road and Tuen Mun Highway.

The truck has been confiscated by the police for further investigation.