Chasing stars. Here are the Mercedes-Benz vintage ads that charmed us through the years

Elena Luchian, February 20, 2017
2.52K 0
Home Classic Chasing stars. Here are the Mercedes-Benz vintage ads that charmed us through the years

The vintage commercials have a way of telling the company’s story, as the posters depict the moments of the automobile development from the very first car to the contemporary innovative advertising techniques.

“Nothing is more powerful than an idea whose time has come”, said French writer Victor Hugo, seeing that innovations were regarded with scepticism. Back in the 1880s, only the bold believed that the newly invented automobile was there to stay. Only their visionary inventors, Carl Benz, Gottlieb Daimler and chief designer Wilhelm Maybach were the believers. They were the dreamers. 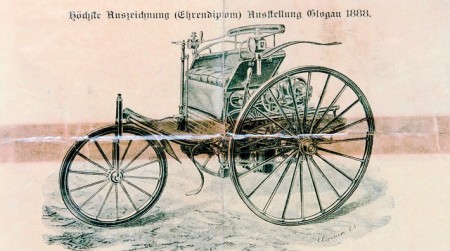 “In those days, nobody believed that anyone would countenance the idea of giving up the elegant horse and carriage for such an unreliable, squalid, puffing and rattling iron vehicle,” noted Carl Benz, the inventor of the automobile himself, the man that opened new horizons. Breakdowns, fear of the technologies that were not understood, reluctance determined a sluggish demand.

Benz resigned advertising and followed the principle that the product must speak for itself. In 1888, he published the world’s first automobile ad for his patented motor car two years after it had first set wheel on the road, in 1888. The commercial spoke of a vehicle that was “absolutely safe” and demanded “no special operating skills”. 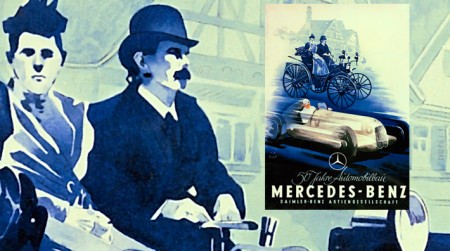 Looking for media coverage, Ludwig Hohlwein, the most famous German poster artist, designed a poster for the 37/90 hp chain-driven car, highlighting the safety, the reliability and suitability for daily use.

Daimler-Motoren-Gesellschaft also counted on the car races to get extra attention and to gear up for future performance.

Daimler and Benz united in 1926, claiming to produce the “peak of perfection”. Some graphics of the time displayed orthodox messages, while other boldly experimented. Yet Mercedes kept its serious nature. They used persuasive language style to target the “fine society” with slogans such as “Mercedes-Benz shines resplendent”, “Refinement … free of pomp and whims of fashion” or “The last word”. 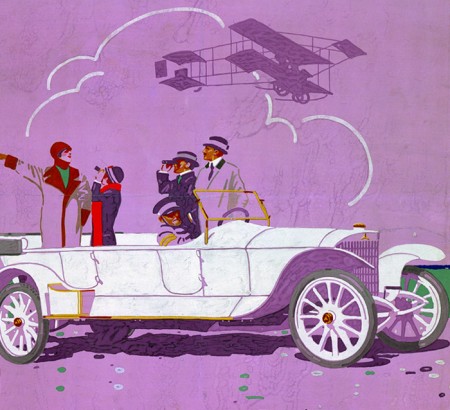 It was the 300 SL that represented the brand’s comeback into motor racing in 1952, after the world financial crisis. Posters with artistic designs, glorifying the heroes behind the wheel were the glamorous and dynamic trend of the time.