Romanian magnate Ion Țiriac took the crown jewel, a Mercedes-Benz 540K Cabriolet A, at the Concours d’Elegance at the Villa d’Este. Guests from all over the world turned heads to check out the automobile coming from Romania, but not the juries. The candy-red car from the former tennis player’s private collection failed to impress them.

With the chassis number 169363, the Mercedes built more than eight decades ago was ordered by a Dutch customer in the fall of 1937. Nothing was heard of its fate during the World War II, but it was found as the property of a couple of brand’s enthusiasts, Al and Sandra San Clemente from Shrewsburry, Massachussettes. The car under their possession underwent a full restoration, that took five years. The body was taken care of by Armando Picinino and it was painted bright red to match the read fine leather that covered the two seats.

Accompanied by a few prizes, the Mercedes then ended up in a collector’s garage, Michel Roquet. He chose to install a new radiator and fix a couple of technical problems, which made the car perfectly operational. In the year 2000, following an auction organized in Monaco by the Ecclestone Collection, under the command of Bernie Ecclestone himself, the 540K Cabriolet A joined the Heselden Collection. 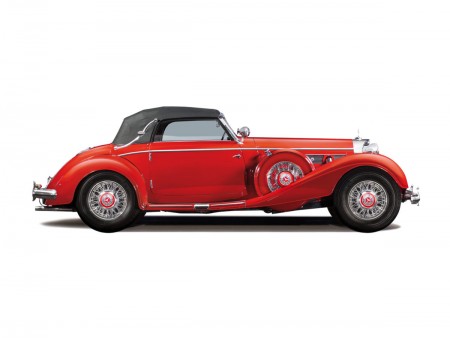 The jewel running on chrome spoke wheels is set in motion by an 8-cylinder 5,401 cmc engine with 115 horsepower and a 4-speed manual transmission. The Mercedes comes with two spare wheel, mounted on the sides in steel cases. A Bosch lighting systemm integrates two headlights mounted on the hood and a central one. Inside the car, the read leather and the wooden finish bring to the present the elite flair of the 30s. The car belonging to the Romanian businessman, Ion Țiriac, has only traveled for 49,485 kilometers.

Only 83 such cars were built. With sophisticated lines and impressive proportions, this Mercedes-Benz 540K Cabriolet A used to turn heads in those times just like it does today. Prince Bernhard of Holland and the founder of the Warner Bross Studios, Jack Warner, owned similar automobiles.