Viano Marco Polo: „My Car Is My Castle”.

The automobile means mobility and Viano Marco Polo is the peak limit of the axiom. Provided with a sleeping zone and a kitchen, this 4X4 with a 120kW engine Viano does not necessarily need a camping, as it can be parked on any beach or meadow.

Seriously or not, whoever climbed into the Viano Marco Polo was speechless, no matter the age, the social class and the bank account. The caravan-Business Class jet-clasp knife combination is not often seen during a lifetime. I believe that everything starts from the very simple outside looks, almost as insipid as a that of a minibus, which leaks nothing from what you can find once you open the door.

You need a keen eye to notice, from the outside, that the rooftop has a rubber fitting where other vans don’t and the pipe above the doors on the right is not a frame for a common luggage carrier, but the device of a sunshade. As for the exterior dimensions, this Viano is no bigger than the E-Class and it can be a daily drive for the family. Thanks to the under 2-meter height, it fits most of the underground parking lots. 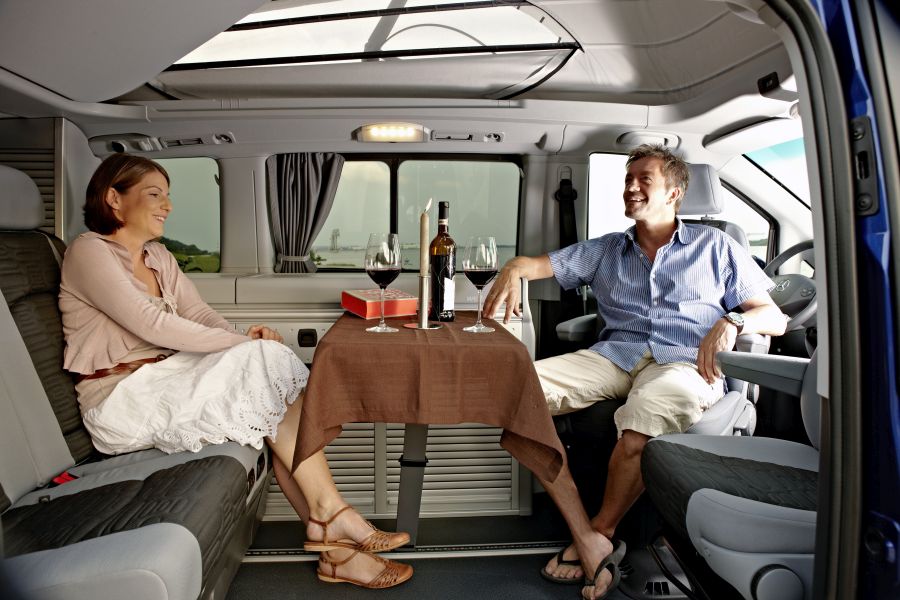 When they created the luxurious Viano, the intention of Mercedes-Benz was to part it from the Vito, which is, first of all, a commercial vehicle. But the two models wearing the same body shell and mostly the same engines, transmissions and mechanical parts. Only the suspensions are different. The Viano ones don’t need to bear as much load, but need to be comfortable and also keep Viano going until over 200 km/h (in case of the V6 engine). The 120 kW Diesel engine is not the most powerful one and the 4-wheel drive arises the dynamics of the car. A 2,5-tone vehicle is not quite light, and the power/weight ratio is not a fortunate one for this Viano. We must keep in mind that it is a holiday car and it is assumed that it will not go over the speed limit. The automatic gearbox is also committed to the 4-wheel drive transmission and it increases the driver’s comfort. On the other side, there are so many electronical systems that turn the Viano into the safest vehicle of the niche-market.

Regarding the facilities and the safety, it does not compete against the limousines of the German brand, but they did no saving when it came to accessories, as the list of equipments resembles a lot that of the limousines. Undeniably, the access and the position of the driver is like in any other van, but except for that, there is no other resemblance. The multifunctional and adjustable seat seems to come from the world of the Actros trucks. And then there are the manevrability and the roadholding which have a tendency to resemble the B-Class.

All those who drove it for a while, no matter if it was the Marco Polo version or not, they probably have it on their wishlist now. If it is also with a 4-wheel drive, as the one we characterized, then it tends to run against the GLK or, who knows, maybe the ML. We drove the 4Matic along the finest sandy beach, through ditches and mud and we were worried we’d be stranded, but the computers of the transmission and of the engine always took care of the crew.

The Marco Polo version of the Viano is a Westfalia-Werke creation. It showed up in the age when the company almost entirely belonged to Daimler-Chrysler. Westfalia started to build auto-vans with a mobile ceiling in 1951. The first creation was based on the VW T1. Then, for the past 10 years, it was owned by several firms and it even came close to closing up, but it has just restarted now. It was a pity for such a company to waste, as it manufactured more than half a million caravans, among which 400,000 were VW.

Thanks to a concept we could find no vice for, although unchanged in 60 years, four adults can travel and sleep inside. The two front swivel seats and the detachable rear seats allow setting up a living room around a folding table (hidden in the sliding door).

In the kitchenet, those who want to cook can dispose of: a two blast-lamps cooking stove, a sink with both hot and cold water, a 40-liter refrigerator and many places for depositing dishes and covers inside the rolling cupboards. The 30-liter drinkable water collector and the 32-liter residual water one are placed inside the vehicle.

Over night, the excursionists can opt for the bed down low, made out of the bench and two extra pillows (they can get a 2,03 x 1,18 meter bed). The second bed, the one up the tower, is much more comfortable and much bigger, but it requires agility to climb up it. The mosquitos curtain and some other ventilations provide a delightful sleep even after canicular days. The upstairs floor can be electro-hydraulically opened, which means that even kids can make the bed by themselves. You only need a certain height to buy such a vehicle and go on a trip, maybe around the world.

Even thought it is a Mercedes from any point of view, its customers are very different from those of a limousine or of an SUV. Some see it as a quality, others see it as a defect.