With a higher driving position and more space, the B-Class takes all the qualities of its junior, the A-Class. By no means is it a van, but a kind of a sports tourer that drives like a hatchback. First test with the B 200 d variant, equipped with a 2.0-liter turbodiesel engine with 150 horsepower, coupled to the new 8-speed dual clutch automatic transmission.

The era of the vans has come to an end, as they have been replaced by the SUVs. But Mercedes-Benz does not intend to give up on the B-Class that has just reached its third generation, because there are still plenty of customers in search of a premium spacious compact car with a higher driving position. Especially after the extinction of the A-Class with the sandwich architecture in 2012 in favor of a conventional format A-Class, the B-Class has its place and scope. If we remember that the R-Class vanished as well in 2013 and the V-Class plays in a totally different league, the note that the B-Class stays the only tourer that is not an SUV in the Mercedes-Benz portofolio. 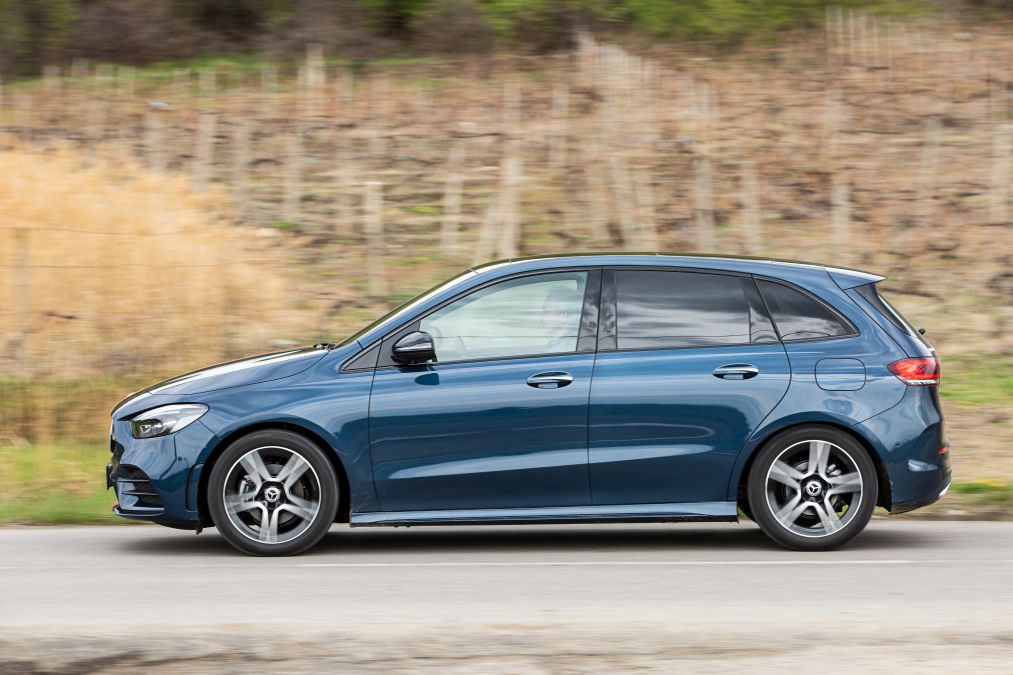 I entitled the review “Smart move” because the new B-Class does not look like a van anymore. Even though its proportions have not been fundamentally changed (it is 26 mm longer, 10 mm wider and 4 mm shorter), the body line is taller and the relatively small glasshouse and the slimmer silhouette provides it with a sport tourer look, not with the appearance of an MPV.

Thus, comparing apples and oranges, meaning the volume of the boot with the fix rear seats in the maximum position towards the rear, the B-Class offers more than the BMW 2 Series Active Tourer (305 liters measured) or the Mini Countryman (334 liters measured).

For the moment, the B-Class comes standard with a 40/20/40% split rear bench with an integrated rear armrest, that is very practical, allowing the transportation of very long items, such as skis and fishing rods. The possibility to load very long items shall be eased even further when the 15-centimeters sliding rear seats will be available, as for the former generation, plus the front passenger’s seat with folding backrest. 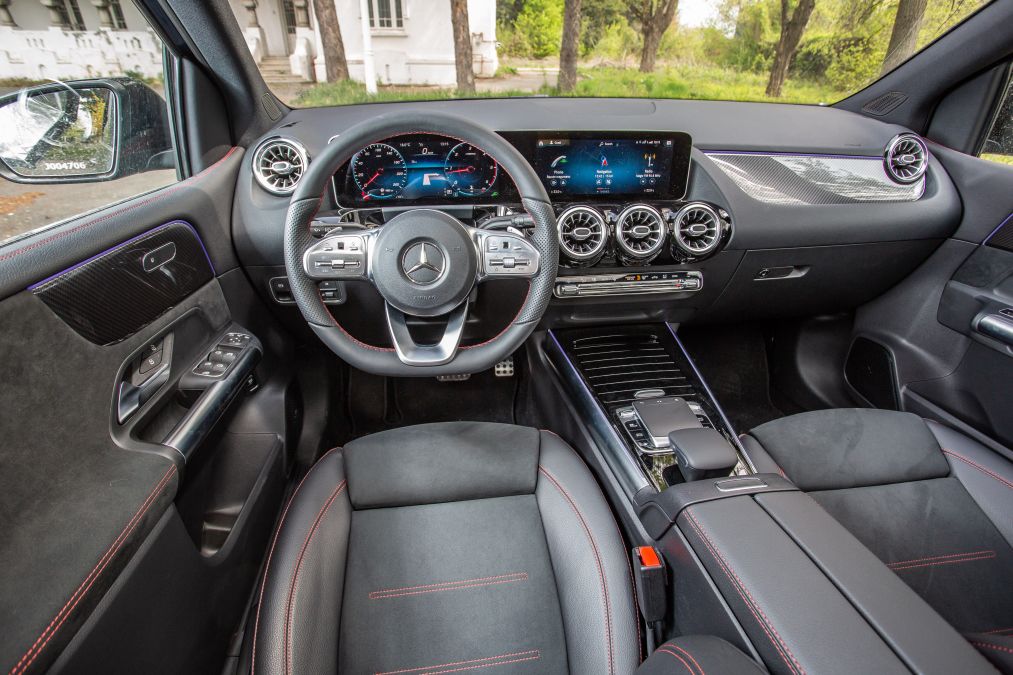 The interior looks fascinating if you order the optional big-sized screens of 10.25 inches. You can buy both 10.25 inch screens for 1,475.60 euro or you can order the Navigation Premium package for 3,016.65 euro which comes also with the touchpad (touchpad is included in the Basis navigation package with two 7 inch screens, 1,356.60 euros). The configuration possibilities are plenty. You are thus able to choose from five modes for the instrument cluster – Progressive, Sport, Classic, Understated and Standard – and you can select from six types of data display inside the speedometer and the revmeter. There is plenty of information structured in the most divers manners, but I eventually selected the classical layout with revmeter and speedometer.

You utter Hey Mercedes and get into conversation with the infotainment system, whom you can ask, by using Voice Control, about hotels, restaurants and many others. Android Auto and Apple CarPlay are included and the navigation features augmented reality, that displays photographs of the indicators in junctions. You also get ambiental lighting with an infinite number of colors and a modern laser head-up display, that provides you with many information straight on the windshield.

It was only the touchpad that I could not get along very well though and I stick with the idea that the solution of the controller was better. You may get over the touchpad and use the touchscreen instead or the voice control. But pay attention! Voice control very well understands the name of the people in the smartphone’s agenda, but fails to understand the names of the streets just as well. 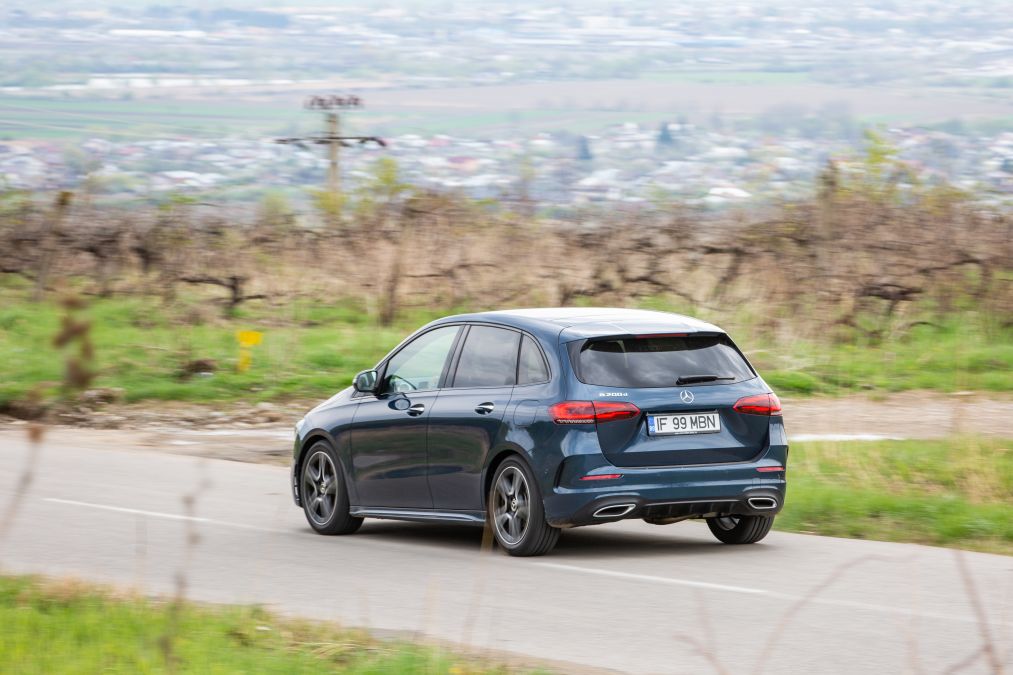 Combined with the 150-horsepower output and with the AMG package with 18-inch wheels, I also received a rear 4-arm multilink suspension, that is replaced by a rigid axle for the models with less output and smaller wheels. The 2.0-liter turbodiesel engine with a capacity of 1.951 cmc is the same with that of the C,E and GLC facelift, keeping in mind that, in this case, it is mounted in transversal position and bears the OM654q indicative (q standing for quer – transversal in German). It is one of the few engines currently on the market that is already compliant with the Euro 6d standards (not Euro 6d-TEMP), in force starting 1st of January 2020. And the dual clutch 8-speed automatic gearbox is completely new, being available exclusively with the new 2.0-liter diesels of the compact class and for the moment, being manufactured exclusively at the Mercedes-Benz car plant in Sebeș, Romania. 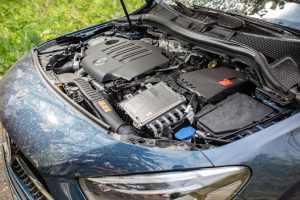 As I anticipated in the first test drive last fall, this comes as the perfect engine for the B-Class. On paper, does not have more torque than the rival engine, but the 320 Nm are available starting
1, 400 rpm and this matters a lot in the city or when overtaking.

Furthermore, the engine is very much helped by the new dual clutch 8-speed automatic transmission, that is very well staged and gears up quickly, even in the normal mode. In downshifts only sometimes, it shows a slight delay and you feel it especially in corners, when you want it to downshift a bit faster. Anyway, you get the paddles for manual shifting behind the steering wheel, which are quite practical.

The engine is not only potent, but also very refined and extremely economic on fuel. In our consumption test cycle, it was of 5.52 l/100 km, and the real driving city average was of 6.17 l/100 km. they are figures remarkably low considering the proportions and output. With the AMG, the B-Class comes with a lowered suspension, that very well behaves. Despite a relative firmness that limits body roll and despite the 18-inch wheels included in the package, the B-Class provides high-class comfort even on bumpy and uneven roads. It also impresses with the quietness of the drivetrain and the generally good sound insulation. At highway speeds of above 140-150 km/h, the new B-Class is a genuine Mercedes.

Thanks to the lower gravity center and to the firmer suspension, the B-Class drives sharply and pleasantly considering that it is a compact van. And least, but not last, the B-Class meets the Mercedes standards in terms of active safety, thanks to the driving assistance package (1,796.90 euros), that includes the Pre-Safe system and the adaptive cruise control, the automatic emergency braking and the lane keeping assistance coming as standard (check the box with the test of the assistance systems).

Repositioning of the B-Class is a great success. The third generation does not look like a dull van but like a modern sports tourer and it drives in the same way, pleasant and sporty for this king of vehicles. The new B-Class is a 100% Mercedes with a high comfort and low general noise and the new 2 liter combined with the very new 8 speead double clutch gearbox is the ideal choice for a family car.