A foot lever and a quarter: Test drive Actros 1951

1951 is not the most powerful version of the new Actros. Nor the most common one. But is the version most wanted by the drivers, because it combines all the immense power with a decent fuel consumption.

One billion euro cost redesigning MP4, Actros’ fourth generation. The first Actros was launched in 1996 and, since then, the renewal rate has been extremely fast and tends to compete with automobile’s one. And here I am talking only about Europe, because in North America the advancement of trucks has the parking brake activated. The shown exponent wasn’t exactly cheap, starting from light alloy wheels and ending with the huge GigaSpace cab with chrome finishes and spotlights on the headliner, with plenty of optional equipments.

OM 471 has a wide economic range of revs which made it easier to renounce at the heavy 16-speed gearboxes, in favor of the modern one with 12 unsynchronized speeds. Auxiliary brake controls are grouped on the same multifunctional lever with a „gear stick” role. The driver has to decide which way to go, the PowerShift3 gearbox will determine how the 12+4 gears can be selected, and it will take into consideration truck’s payload, accelerator pedal’s position, engine revs, road slop and the position of the auxiliary brake. 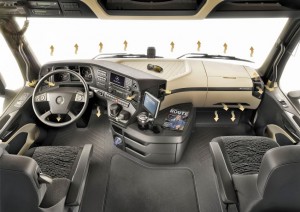 The driver has another option – when he can be stubborn and change speeds „manually” or to adjust truck’s computer system at a certain speed, at a fixed distance compared to the front vehicle and, of course, to stabilize the hysteresis of speed when climbing and descending hills. After that he can forget about the pedals. In fact, the manufacturer states that 85% of the total brake maneuvers can be performed without activating the brake pedals. Meaning that, after you had three pedals you get only two, and only one of them is used 15% of the time. OM 471 produces a maximum brake power of 400 kW, higher than the one which is being used for driving. After that you can add the brake retarder that has a maximum level of 3500 Nm. At the first call are being activated only three cylinders and, when decelerating, all the six cylinders take part. After that, it all comes up to the brake retarder that intervenes with 20 percent of its total capacity at every decelerating gear.

In turn, the gearbox will choose the speed in which the motor brake’s effect is at maximum level. It’s a truly sound festival. When descending long hills you can finally listen to the engine sound at the highest levels. Next on the list is ascending with another type of sound, and if it’s about a well-known road, the driveway is mostly propelled out of inertia.  Both at the top and on the easy descending, the smooth rolling comes into functioning, and in the cab you won’t hear anything else but the base transceiver station. Anyhow, the Actros’ cab is extremely silent at 85 km/h.

510 HP are a beautiful dream for most drivers, but especially those who need to maintain the 80 km/h speed on all highways, regardless of the regions they pass through. The truck presented here had been loaded with a weight close to the maximum authorized load, but it didn’t feel any of the ups and downs that we passed through. According to Mercedes – Benz officials statements, MP4 has a diesel fuel consumption 5 percent lower compared to an identical truck with Euro 5 version, and if we relate to the previous engine generation, the economy exceeds 10 percent. For Europeans, where the working time is controlled, these numbers can signify about 20 liters of diesel saved daily or even 4-500 per month. A necessary detail nowadays, when the profits tends to 0. 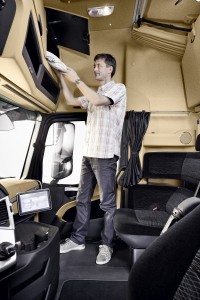 The GigaSpace Cab is another beautiful dream that came true, and between the driver’s seat and the wheels there are three air springs that permanently co-operates electronically in order not to needlessly stress out the driver. The SoloStar version comes as a sequel to the dream. We push aside the 2.13 m interior height and we can notice a fixed armchair in the right side. As its characteristic style, Mercedes – Benz interior equipment stunned the audience at the commercial launch, and now they are included on every European manufacturer’s list, and the only difference would be the improvisations. In turn, the safety and assistance systems are hard to replicate.

Through the most recent safety systems introduced by Mercedes – Benz is the so-called Active Brake Assist 3 that, even if it does not guarantee the avoidance of frontal collision, it will surely attenuate the effects, increasing the odds that those involved in the accident can be safe and sound. Starting with ABS, ASR, Brake Assist, Stability Control Assist, Attention Assist, Hill Holder, Proximity Control Assist and Lane Keeping Assist, plus all sorts of rain or light sensors, tyre pressure sensors or for coupling the semi-trailer, all this gives the drivers the feeling that he can go home calm.

A truck like the new Actros is hard to criticize. And this is not something subjective, as you can see lots of Actros on the European highways.