Mercedes Up in the Air

Put your Mercedes up in the air and wave it like you just don’t care! No, it’s better not to wave it once it’s up in the air! Two Mercedes cars seem to float in the air. It was just another innovative sculpture by the British designer Gerry Judah.

High quality has a whole new meaning for Mercedes. Celebrating 120 years of motorsport glory, the German brand placed two of its cars as high as possible. Literally! The steel sculpture, designed by the British artist Gerry Judah, goes 26 meters high. 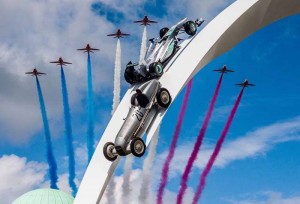 The two Mercedes racing cars suspended up in the air look like they are passing by each other at high speed. At one end of the bow trail, a 1934 Mercedes W25 racing car, celebrating its 80th anniversary was placed facing down. The other one, looking as if racing in the opposite direction, a Mercedes W04 Formula 1 car, raced by the Mercedes British driver Lewis Hamilton in 15 Grand Prix last year, points to the sky.

The two silver arrows, together with the iron structure they are positioned on, weigh no less than 160 tonnes. The curved air-lifted imaginary race track measures 90 meters in length. Watch the following video to understand how the two racers got up there!

“We pushed the limits of impossible in size and complexity.” This is how the design genius Gerry Judah describes this year’s creation. It is already something habitual for the British artist. Every year, same venue, he designs sculptures for the Goodwood Festival of Speed using cars from various brands. 2014 was the time for Mercedes to take the spotlight with the central display.

The Mercedes-Benz executives were amazed by the breath-taking design. “The sculpture goes beyond my wildest expectations. Here is to the next 120 years of thriving competition, both on and off the track”, says Michael Bock, head of Mercedes-Benz Classic.