The unconventional Mercedes GLA goes against the BMW X1, both of them bearing turbodiesel engines and a 4-wheel drive. Comparative review Mercedes GLA 220 CDI 4Matic vs BMW X1 xDrive 18d.

Presented as a concept at the Paris Motorshow in October 2008, the BMW X1 joined series production an year later, at the BMW enterprise in Leipzig. At the time of its arrival, the X1 was considered to be the first premium compact SUV, although it did not feature the proportions of a compact SUV. Its 1.545 meter height was closer to that of an estate than that of an SUV, as for the design, it looked more like an elevated 3 Series Touring than like a genuine SUV. As a matter of fact, the resemblance to the 3 Series is not just at a stylistic level. The X1 uses the technical platform of the former 3 Series Touring (E91), as the all wheel drive system xDrive is built as based on the rear wheel drive. 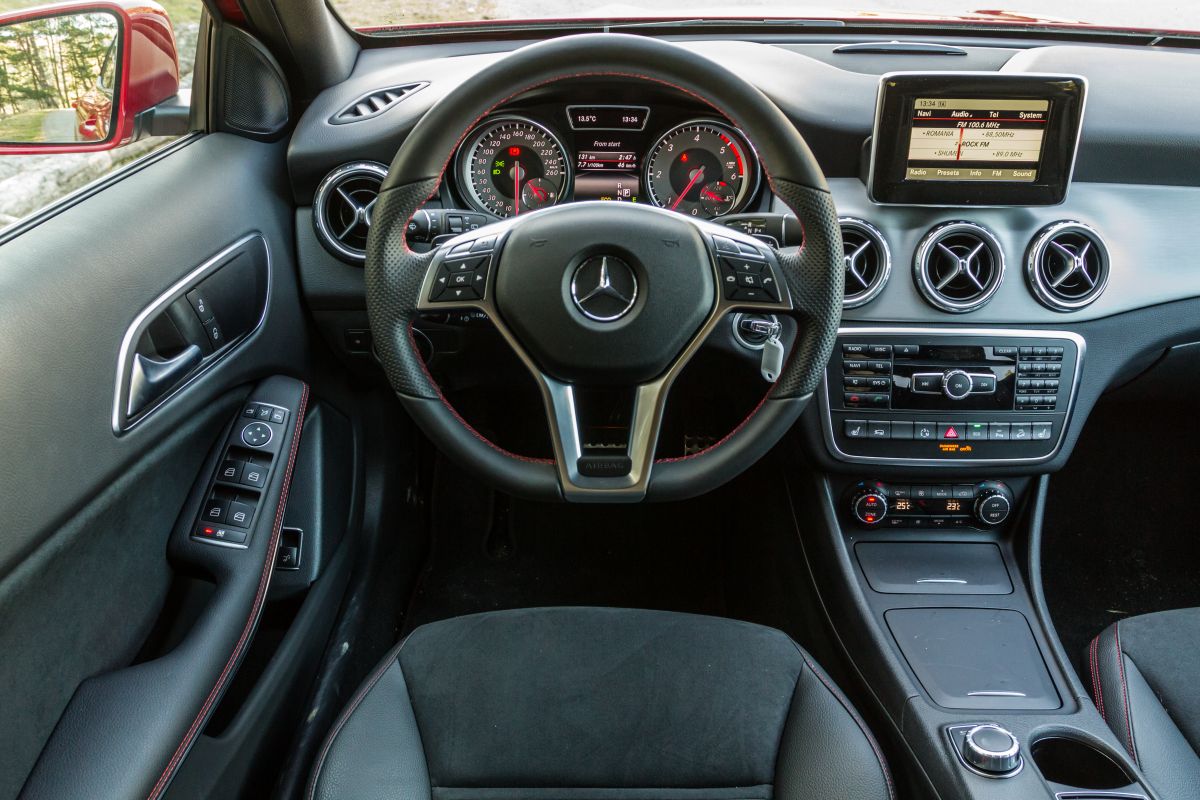 The Mercedes GLA comes up with a whole new formula, as it is part of the new compact models family of Mercedes, built up on the new front wheel drive MFA (Mercedes Front Antrieb) platform, which can also be adapted to the new all wheel drive, especially developed for this platform. With a height even lower by 50 mm from that of the X1, the GLA resembles more to a new elevated A-Class than to a compact SUV, contendor for the X1. But no doubt, the GLA has a more magnetizing design. With the power dome on the bonnet, the simulated front and rear shields, a higher ground clearance, the more agressively flared wheel fenders than those of the X1 and the diminished glazed surface, the GLA looks like a modern crossover, which draws attention more than the X1. 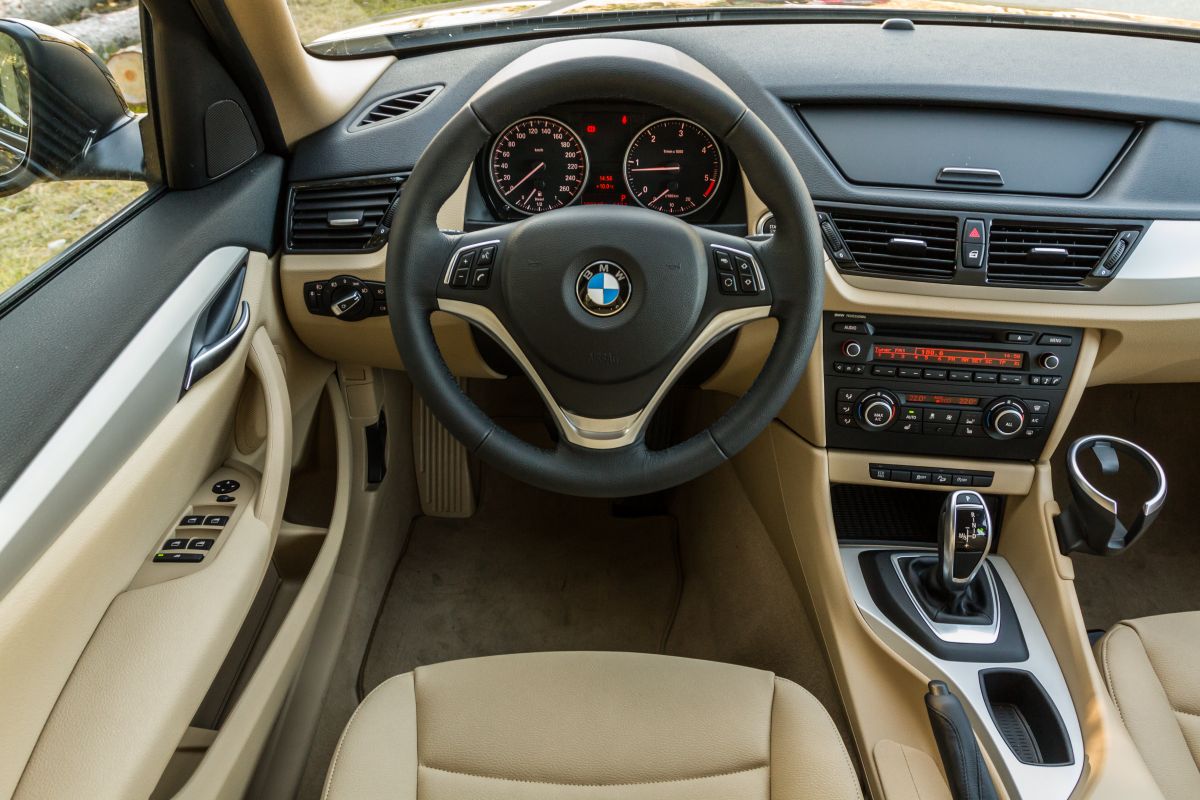 Stilistically, the A-Class is obviously different from the GLA, but technically, the GLA is an elevated A-Class. That is why the inside space is not a cornerstone, as Mercedes emphasizes the lifestyle more than the practical side. The inside width and the legroom at the rear are slightly smaller than those in the BMW, but the head room at the front and at the rear is obviously smaller than in the X1. In addition to that, the small windows give a claustrophobic feeling and the visibility at the rear is more restricted in the GLA, because of the small rear window and because of the wide and tilted C-pillar. The BMW also has the advantage of the standardly offered 40/20/40% split rear bench (in the Mercedes, the rear bench is split just by 40/60%). Both rear benches easily fold over, but none of them create a perfectly plain load surface. On the other hand, there is no threshold load, as the boot has a double floor. At the rear, the seating is more comfortable in the BMW, not only thanks to the larger interior height, but also because the Mercedes rear bench is placed too low and the passengers keep their legs in mid air. 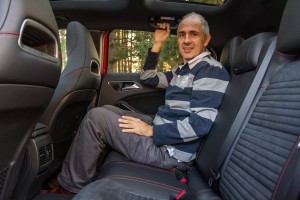 The standard volume of the boot is similar for both models, but the Mercedes is the more practical car, as its boot is wider and has a more regular shape thanks to the more compact rear multilink suspension. Instead, with folded rear bench, the BMW provides a larger volume and a larger load length. By placing the shift lever of the automatic gearbox on the steering column, the Mercedes provides more storage space on the central console and has wide door pockets.

Contrasted to the conventional, the driving position in the Mercedes is lower, as the GLA has a more sporty driving position. But the sporty seats with built-in headrests of the AMG Sport package are not necessarily the best option, because they do not allow adjusting the headrests.

The BMW also has a gain regarding the ergonomics. The very modern iDrive system, with a high resolution display, is in possesion of the same soft as in the more expensive BMW models. The featuring of the system with the dashboard embedded diplay, is an umbrage of the former 3 Series. By comparison, the GLA uses an older version of the Comand unit, with many control buttons, but the independent 7-inch display is up-to-date. 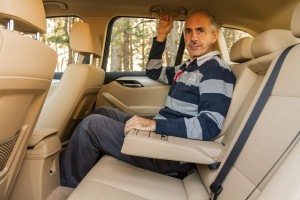 In driving, the BMW is sharper, more dynamical, more agile and there is no any steering intrusion. It is an extra proof that, for the delight of driving, nothing can replace the benefits of the rear wheel drive. The xDrive system is upwarded to more dynamical driving, as the torque is directed more to the rear wheels. As a matter of fact, its allocation varies between 100/0% and 50/50% rear/front.

But how about the GLA? Mercedes has built one of the best front wheel drive models on the market and the 4-wheel drive provides more safety and more provisions to the limit.

For the test model, equipped with the AMG Sport package, including the Dynamic Drive package with a sport suspension lowered by 15 mm and sport steering, the GLA can be agile and delightful in driving, the body roll on bends is reduced and the steering is conversable. However, up to the limit, the GLA understeers more than the X1, but this only confirms that the 4-wheel drive derived from a rear wheel drive provides more incision than a 4-wheel drive based on the front wheel drive. 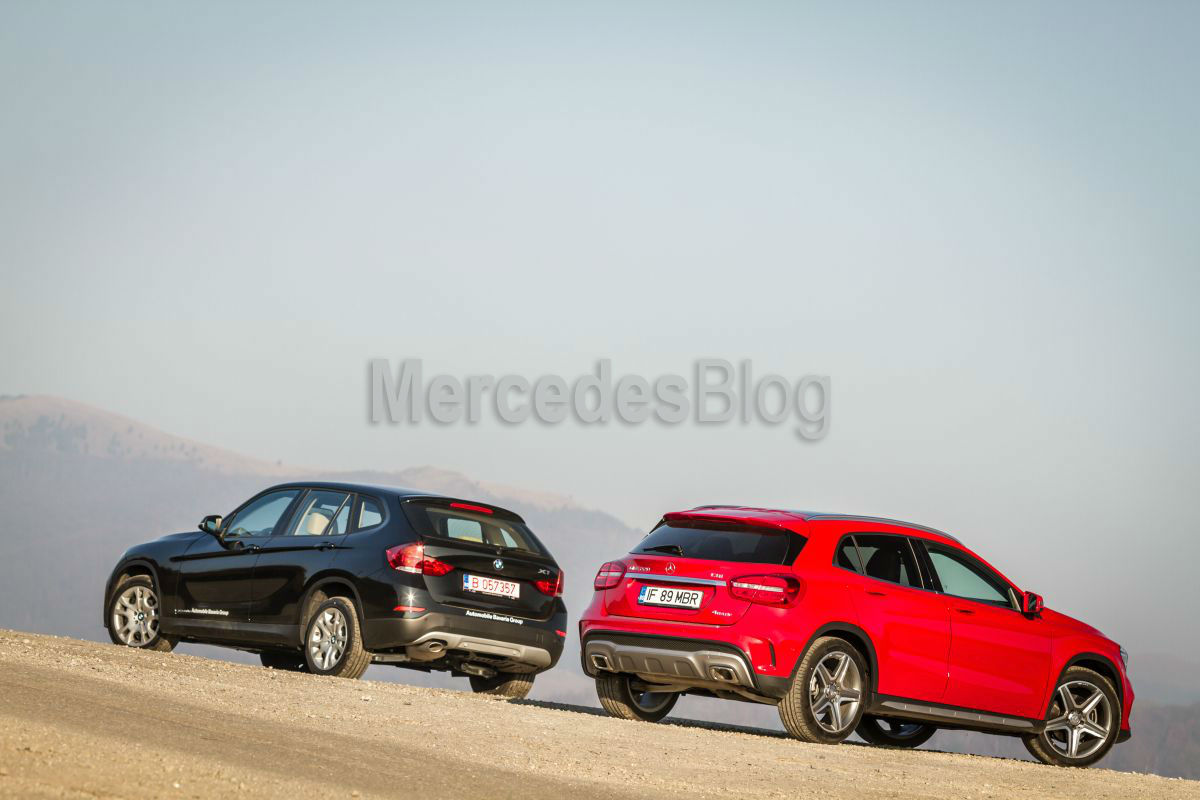 On the other side, the BMW fans will not benefit on a long term basis by the incision of the X1, because the next generation will switch to front wheel drive by 2015 and is to take over the new platform already used in the Mini family and in the new BMW 2 Series Active Tourer. We shall see then whether BMW can build a front wheel drive system better than the current Mercedes one. 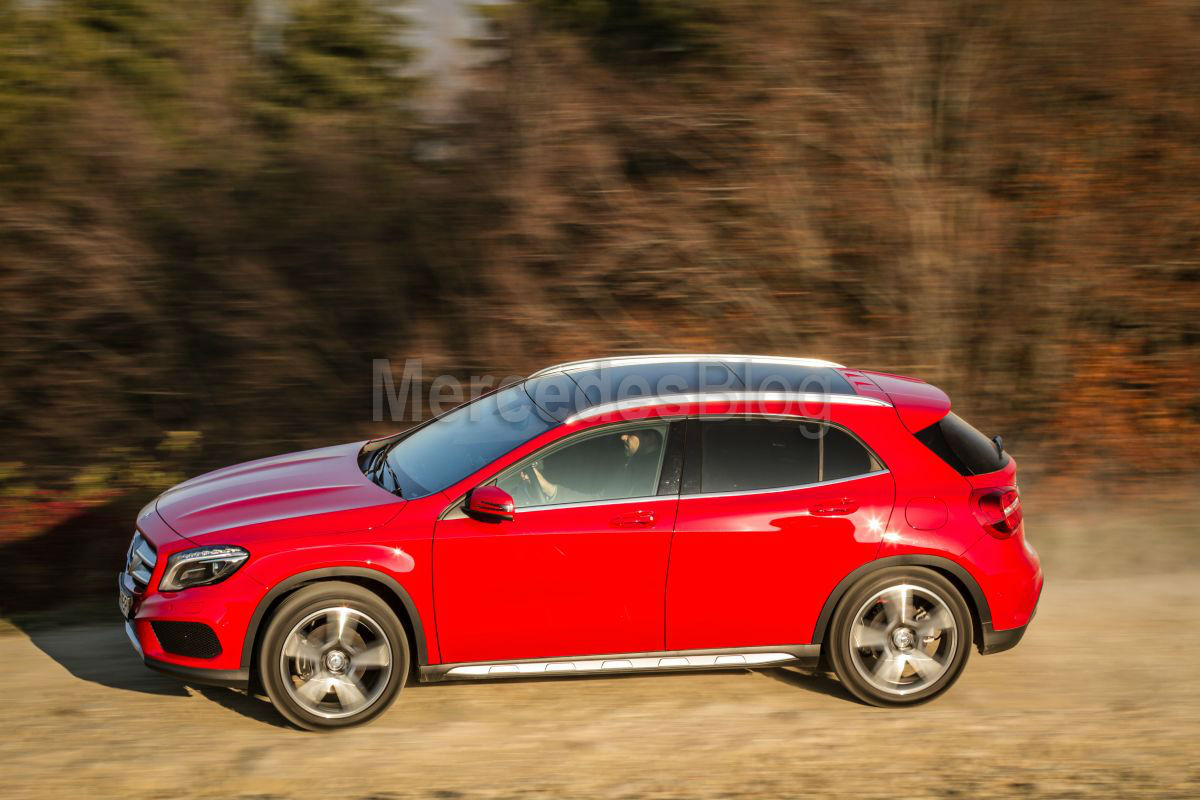 With a 27 HP advantage, the Mercedes engine provides a better dynamics and the GLA also benefit of a weight by 55 kg lower. Besides, the lower silhouette of the GLA, which gives a reduced aerodynamical resistance due to the smaller front part, also helps getting a lower fuel consumption, although the GLA has higher power. For its 170 HP, the official 5,1 l/100 km fuel consumption is a record of its class. In reality, one can get figures like 6 l/100 km, which is a rewardable result for a 170 HP and 4-wheel drive model. Instead, the classical automatic 8-speed gearbox of the BMW is more precise. It is more intuitive, has a more intelligent soft and shifts faster. The automatic double clutch gearbox in the Mercedes has a slight delay in get-aways and downshifts. Especially during taking over, we wished for the GLA transmission to respond faster, when the throttle pedal is pressed. 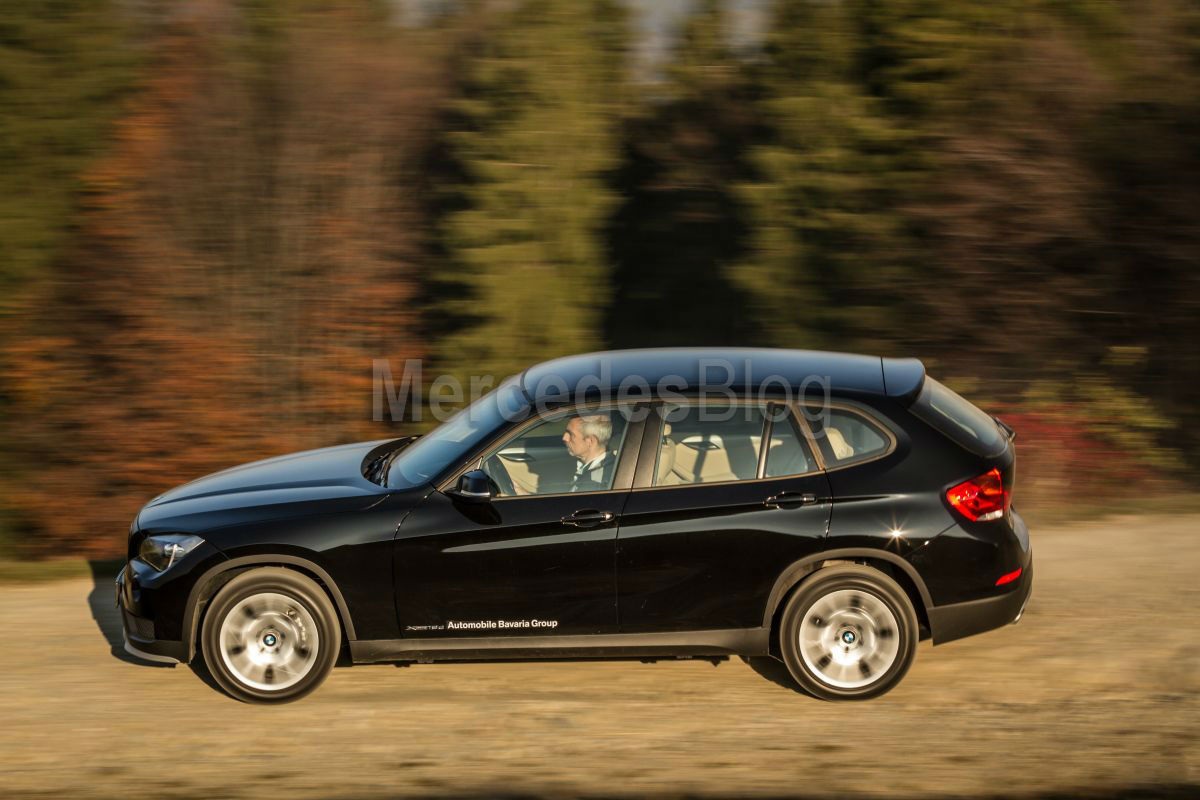 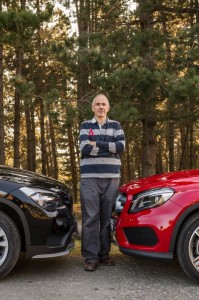 The 2-liter 143 HP turbodiesel in the BMW is not in the green any more, as an upgrade version of it has already been presented in the X3 facelift. The engines of both models are relatively noisy and cannot hide the diesel origin. Especially onload and during intense accelerating, you can hear that typical diesel sound, which is a bit fraughter in the Mercedes than in the BMW. The tested X1 had standard 17-inch wheels, while the Mercedes featured the AMG Sport package with sport suspension and 19-inch optional wheels. That is why, in the Mercedes, the comfort is touched by passing over short bumps. But it is not mandatory for you to purchase the AMG Sport package and, apart from the BMW, the Mercedes offers an off-road package with a suspension raised by 30 mm, perfect for the adventure lovers.

The Mercedes GLA represents the most modern execution of a modern crossover: stylish, elegant, with many customized packages. It has an effective engine and it is extremely economical, but unrefined. For a 4-wheel drive system derived from a front one, the Mercedes got the best it could, as the GLA is delightful and agile in driving, especially with the Dynamic Drive package. But it is not as sharp as the BMW X1, which is backed by a 4-wheel drive with sporty exposure derived from a rear wheel drive system. The X1 is a little more spacious at the rear and has a more intuitive iDrive system, but its showmanship does not make you cry out “wow” as for the GLA.