The recently facelifted Mercedes-Benz B-Class has to stand up against the first of the two oncoming invaders: the certainly-not-an-MPV BMW 2 Series Active Tourer. While we wait for Audi’s take on the premium compact MPV segment, we pitted these two against each other to find out which one is currently the best offer.

What could have proven to be another R-Class style fiasco for Mercedes-Benz turned out to be the launch of a new successful segment. The relatively wealthy families on the lookout for a premium compact yet roomy car suddenly found their needs answered by the 2005 Mercedes-Benz B-Class.

Basically, it was a better looking A-Class with more room and no apparent drawbacks, apart from the larger exterior dimensions. For obvious reasons, the Mercedes-Benz marketing department chose to advertise the car in a different manner, highlighting the comfort, practicality, roominess and dynamics. They even came up with a name for it: Sports Tourer.

How do you express the same idea without the risk of plagiarism? I know: use a synonyms dictionary. That’s probably how BMW came up with the Active Tourer moniker which they stuck at the end of the existing 2 Series range. It didn’t seem to make a lot of sense at the time since the 2 Series was a small coupe, but we’ve gotten used to it since.

We’ve also gotten used to the FWD (front wheel drive) BMW architecture, something that the die hard fans of the brand saw as a possible end of an era – if not the whole world itself. If you think about it, all the scares were largely unfounded since we’ve already been driving a FWD BMW all along: the MINI.

And since we’re on the topic of driving, why don’t we start this confrontation straight with the fun part? They both have similar diesel engines (2.0 for the BMW and 2.2 for the B-Class) and both develop close horsepower values: 136 hp for the Mercedes-Benz and 150 hp for the Series 2 Active Tourer). If on paper it sound pretty close, out there on the road it’s anything but.

The BMW is miles ahead in terms of pure dynamics. Starting with throttle response, gearshifts, handling and steering feedback, it simply is a whole nother beast than the comfier Mercedes. In Sport mode, the BMW is quick to accelerate and feels very well planted on the asphalt. The steering is meaty and pretty talkative, even though there’s the occasional light torque steer when you step on the gas pedal with too much conviction.

In the Mercedes-Benz B-Class, you won’t feel any torque steer. Actually, you won’t feel anything. The flat bottomed steering wheel may look like it just came off an AMG car (the B-Class does have the optional AMG package installed), but in reality it lacks feel, it’s soft and it doesn’t appear to have any direct mechanical connection with the front wheels. Don’t worry, there is one. 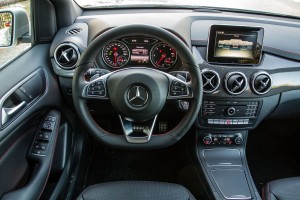 The new B-Class scores when it comes to ride comfort, but the BMW is pretty close. Mercedes-Benz went for a softer dampers setting, even though our test car came with AMG suspension, while the BMW had adaptive dampers with three different settings: ECO PRO (or comfort), NORMAL and SPORT. I’m gonna have to quote my colleague Răzvan here and say the comfort setting on the BMW is sportier than the sport suspensions on the B-Class… The B-Class would have probably been even more comfortable with smaller wheels instead of the 18″ AMG alloys, compared to BMW’s 17″.

The end result is that the 2 Series Active Tourer handles better in corners, with a lot less roll and a lot more fun. It gives you the confidence to charge each next turn with more and more speed, something that the Mercedes-Benz B-Class doesn’t encourage you to do – it is safe around the corners, it just doesn’t feel like it is.

But these are primarily family cars. It’s good to know you can have some fun after you drop the kids to school (but before you go shop for eggs), but it shouldn’t really be a decisive aspect in anyone’s buying decision. Yes, comfort is important, but we’ve already settled that there’s not much to choose between the two in this respect. So it looks like BMW’s plus in agility might not help it a great deal in convincing people it’s the best car in segment.

So it’s down to two things: practicality and roominess. 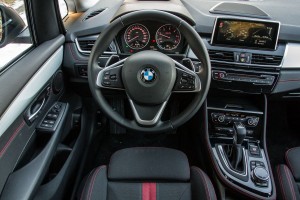 The B-Class has a steering column mounted gear shifter (as a lot of Mercedes-Benz cars do), which should mean there’s a lot of room opened up on the lower central console. There is indeed, but it simply houses the ashtray and a rather large and boxy storage compartment. BMW made some minor changes to its dashboard layout that have created some stowage trays (well, just one, actually) just above the gearshift lever, that can easily hold a phone and a wallet. It’s a draw so far.

Then there’s the boot. The Mercedes-Benz B-Class has a bigger volume and a larger loading area. The differences, though, are marginal. B-Class has 20 more liters to BMW’s 468, while the total volume with the backseats folded is 1,510 liters for the BMW and 1,547 liters  for the Mercedes-Benz. They both have a completely flat loading surface, but the Mercedes-Benz needs a mobile double floor boot for that. Still a draw.

Moving on to the human occupants of the cars, it’s still tight. The contest, I mean, not the cars. They both offer tons of space for all the passengers, no matter where they’re seated. The rear cushions in the BMW are five centimeters (2 inches) shorter than in the B-Class, but it doesn’t seem to hinder the overall comfort, at least not over short distances. The Mercedes-Benz, on the other hand, has a very upright backrest for the rear seats which can become a nuisance pretty quickly – a feature which might explain the extra liters in the boot volume. BMW has sliding 60/40 rear bench (also available for the Mercedes-Benz in the optional Easy Vario Pack Plus) and 40/20/40 folding backrest with adjustable tilt angle. The balance, too, is starting to tilt.

And it’s clearly going in BMW’s favor. The exterior design is great for both cars – they look just like a BMW or Mercedes-Benz compact MPV should. It’s the inside that sets them apart. Mercedes-Benz can’t really hide the fact that the B-Class is a few years old model that’s just been facelifted, and not a completely new one like the BMW. The plastic looks and feels cheaper, the leather has a sad, dark grey color and the controls have a more fragile, plasticky feel to them.

On the other hand, the BMW Series 2 Active Tourer wraps around you in a way that’s both cozy and sporty. The dashboard is layered, not so abrupt as in the B-Class and the materials and finish are of higher grade. The front seats offer superb lateral support, a thing that comes in handy in conjunction with BMW’s impressive dynamic capabilities. The whole car feels solid, robust, well made.

There can only be one winner, then. If you’re looking for supreme comfort, then spec a Mercedes-Benz B 200 CDI without the AMG pack and with smaller wheels, and you’ll be happy. Any other type of buyer will find everything he needs in this very respectable BMW product that proves you can get it right the first time. Well done, BMW. I’m sure it’s not over, though.