Arocs is a brand new truck, from the cabin to its axles. The Euro 6, in-line six cylinder engines and the cabins are the easiest to notice, but this is just the beginning.

Daimler began designing the Arocs with an in depth research of the constructions sector. Thus, he learned that half of his trucks are used especially on construction sites, another third’s task is to supply the sites and about 15% are destined to ship concrete. The more rare applications include shipping very heavy loads or communal activities. For its part, the Arocs family has been split in two: Loader and Grounder. The first is designed in such a way that it has as little kerbweight as possible, in order to be able to transport as much load as possible on public roads without affecting the maximum authorized weight, whereas the second member of the family has to manage more heavy tasks, on any type of terrain.

Due to the fact that Euro 6 regulations have become mandatory, all European trucks manufacturers have updated their offers with new engines. Mercedes-Benz on the other hand is part of the small group of Europeans that have changed besides the engines, the entire vehicle. Ranging from 18 to 41 tons any combination is possible with Arocs. According to the needs of the owner, the new trucks can be configured by opting for engines, transmissions, cabins and chassis from a very long list. We were offered about 20 different versions, from the thousands available, for the launch event alone. 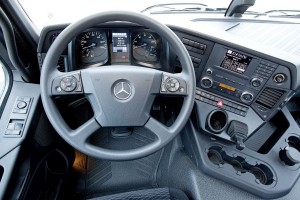 The 16 engine line-ups varies from 238 to 625 HP and, as in the case of Arocs, V8 and V6 engines have been released entirely, in favor of the six in-line cylinder, which are lighter and can be cooled more easily. Evidently they are also cheaper, but this is not necessarily mentioned at press conferences. The drivers cannot complain for the lack of the torque that the previous V engines had, their only shortcoming being the fact that they have to climb an extra 20 centimeters in the cabin, unlike before.

For the first time, alongside the Arocs were also presented the new 15.6 liter engines, that were designed and produced by Mercedes-Benz in collaboration with Detroit Diesel, one of the American divisions of the Daimler group. As they say, there will be another “global engine” which will be seen not only in Europe, but also in Australia and the two Americas. Only the name has lingered of the legendary two-stroke Detroit Diesels with individual pumps per cylinder. The turbocompound setup, through which a second turbine gives back part of the burnt gases’ energy to the crankshaft, is applied successfully in OM 437 although it is not a Daimler invention – Scania having such engines in production for quite a while. Because of this technology, the engine power has increased with 68 HP, on heavier loads, while the diesel consumption is even two percent smaller.

The standard configuration with automatic transmission is yet another premiere, which among other things has specific functions for construction site trucks, such as the swing to exit the sinkage. Also the transmissions’ computers know when Arocs is loaded and how much, if it is driving uphill or downhill, while selecting gear ratios accordingly. No less than seven types of cabins are available for site workers, wide or narrow, with or without bed, with high or low headliner. The only version missing is the one for the crew, with four doors, which will be put into fabrication starting next year.

Although it is primarily destined for construction workers, hence the lack of wooden and leather ornaments, the new trucks still remains an authentic Mercedes –Benz, the safety elements, comfort, as well as the quality design betray it. In spite of the apparent simplicity, the interior can be characterized by plenty electronic elements, the most part borrowed from its’ bigger brother Actros. 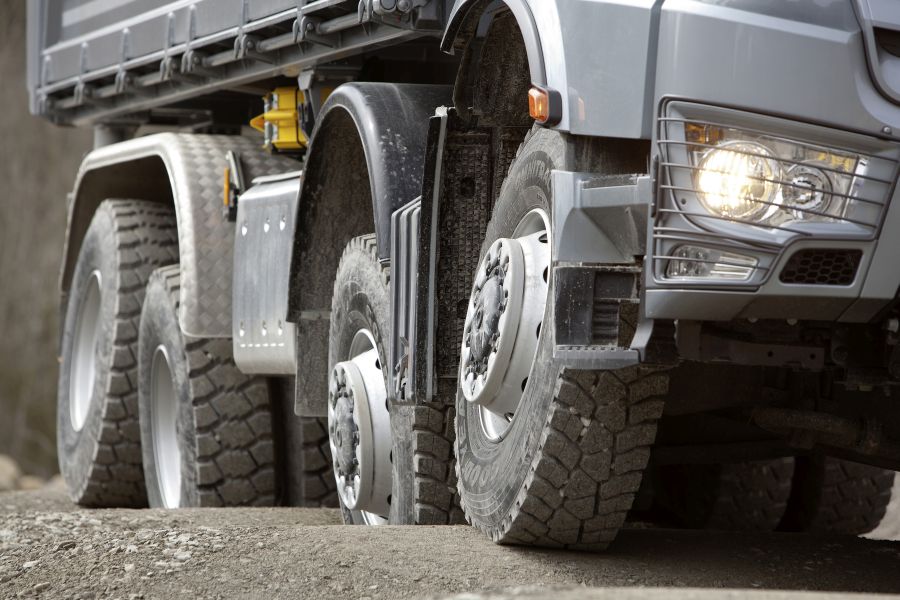 Another premiere for Mercedes-Benz is the hydraulic powered option for the front axle. Various rigs have already been using this traction system for a long time, and MAN also offers it for quite some time. Evidently Mercedes-Benz promises its’ setup to be better, because the driver has no interference, the speed and torque in the front wheels being calculated by the gearbox computer in accordance with every moments’ needs and synchronized perfectly with the rear wheels. The new direction assistance system also pertains to hydraulics and electronics, the steering wheel being as easy to maneuver as a games console.

After going through the “obstacle course” put “at our disposal” in a limestone quarry with ease, course that was otherwise hard to travel by foot, I see that the life of tip lorry drivers is not as hard as it used to be 20 years ago.