That’s pretty much what the Brits from Car Magazine set out to find out.

But first they had to get over their looks. The Mercedes-Benz made the strongest impression, with its two AMG packages summing up to approximately 3.600 euros that turn it into the most “naff” (British slang for tacky, tasteless) Mercedes the journalists at Car had ever seen. Their words, not mine.

That impression might have been helped a little by the visual restraint of the Audi, which needs a keen eye to spot it’s not just a regular Q3 with the S-Line package. 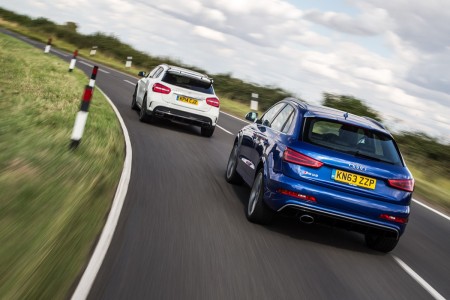 But the all important thing is if the looks match (or surpass) the performances, as these two cars come with very high expectations based on their sporty badges. The power on offer is a promising start, with 360 hp for the GLA 45 AMG 4MATIC and 50 less for the Audi RS Q3, and with both sporting 4WD, the 0-100 km/h times are lightning fast: 4.8 seconds for the smaller, lighter Mercedes and 5.2 for the porkier Audi.

Still, it’s not all good news for the GLA: testing the two cars, they found the GLA 45 AMG’s engine to be a tad too stressed out, forcing a huge amount of power out of a smallish engine always guaranteeing some turbo lag. According to them, the power delivery is not linear, to say the least, which makes driving the GLA fast tricky at times. They also say that the sound that comes out of the GLA 45 AMG isn’t very true to the brand, at least not until the exhaust has warmed up really good. 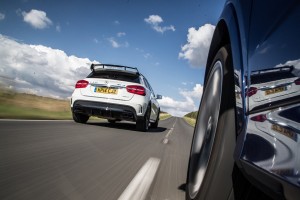 This doesn’t mean that it can’t offer an exquisite experience on tight, bendy roads. It just takes a little more time to get used to it and a bit of patience to learn its quirks.

And how does the Audi compare? Well, it would definitely come second in a time race, but the driver would have a more enjoyable experience. This is due to the Audi having a bigger engine which delivers a more continuous flow of power through a more sensibly spaced S Tronic gearbox. While this ensures a nicer, softer ride, the journalists ponder whether it isn’t a little too calm for an RS model.

The interiors are a perfect reflection of the exterior of the cars, they say. The Audi is finished beautifully, with great Nappa leather covered RS seats and the usual quality we’ve come to expect from this brand. It feels like a car you could travel long distances in perfect comfort. By contrast, the GLA is a lot harder and with less quality materials.

The verdict starts a bit confusing, in the sense that it’s not clear which car comes on top. They do say that the Audi is “the nicer car”, praising the potent engine and the clean, smart interior, but they also hint at its substantial price.

As for the Car journalists, they would go for the Audi since it’s the easier to live with on a daily basis.