Mercedes-AMG Project One: restriction for the 275 buyers to not resale

The first customers will receive their Mercedes-AMG Project One supercar in 2019 but they have to sign a contract with some clauses to avoid resale of the car in the sense to speculate the exclusivity of the car. All 275 units were already sold.

The very exclusive cars are object of speculators.
Ferrari has a very strict policy to sell its hypercars. The rich people cannot bought a Ferrari hypercar like La Ferrari, Enzo or F50 if they were not a frequent Ferrari buyers and owned some Ferrari models.

But Porsche 911 R was such an example of speculation. These speculators bought such cars only for reselling as expensively as possible. They have money to invest in these jewelries on 4 wheels but don’t care about driving pleasure or social status, being interested only in a maximum profitability. In case of 911 R, the car has appeared on internet  with zero kilometer  for a triple price immediately after was launched.

Ford tried to protect its GT supercar and the buyers must sign a contract that they do not sell the car for at least two years. If they do not respect the contract they will reach in front of the court.
In principle, Mercedes will use the same type of contract for the 275 units of the Mercedes-AMG Project One hypercar.

The buyers had to make a down payment in the first step and to sign a contract with some very strict clauses. The purchase option includes a bilateral right of withdrawal, but the buyers will not be able to resale the car. Mercedes-AMG will scan the internet platforms for selling cars to avoid direct resale.

The price is 2,275 million euros plus VAT and luxury taxes where exist. This mean a minimum final price of around 2.7 million euros in European countries where the VAT is around 20%.

Mercedes has performed some tests with camouflaged prototypes on closed racetracks  in England and Spain but did not take the project One on public roads.

Chassis and engine built in England

The chassis of the Mercedes-AMG Project One is made in England, very close to the Formula 1 engine factory in Brixworth, where the engines of the Project One will also be manufactured. The short connection between the engine and chassis production place help the development.
The engine is tested on two stands in Brixton but Mercedes can also use the F1 test bench if is needed.

To reach the high rev limit, the valves will be activated pneumatically and not mechanically. To reach even the 11,000 rpm limit, the engineers has to harmonize the powerful engine with the 8 speed automatized gearbox. A dual clutch or a classic automatic gearbox with torque converter would be too heavy. Also the F1 gearbox was excluded because it is too rough and to loud for a street car.

Read here all the details about the Project One propulsion system

Project One will roll on semi-slicks to customers. But slicks will also be available but only for driving on the racetrack.

Michelin specially developed Cup tires (Pilot Sport Cup 2) with 285/35  in front and 335/30 on the rear. For comparison, the tire size of the Mercedes-AMG GT R is 275/35 ZR19 in front and 325/30 ZR20 on the rear. The 10-spoke aluminum forged wheels with central locking are a new development. They have a radial, aerodynamically sophisticated part cover made of carbon. This should improve the aerodynamics and low the Cx value by a better flow around the wheel.

The Project One allows different driving programs, including a purely electrical mode. Then only the e-machines work on the front axle and will allow a pure 25 km electric range.

Active aerodynamic solutions such as the gills on the top of the front wheel arches and the two-part, extendable rear wing will guarantee outstanding driving dynamics as well as the pushrod suspensions. At the same time, three flat ventilation slots per each spoke section ensure optimized heat dissipation from the brakes. A carbon-ceramic brake system delays the hypercar.

The look of the Mercedes-AMG Project One is characterized by large air openings that run the entire front apron, narrow LED lights, an advanced cockpit and a large diffuser. The airbox on the roof provides the engine with fresh air. The rear window allows a view of the V6 turbo and the rear pushrods.

In addition to the central tailpipe, AMG places two small tubes. They imitate the Formula 1 wastegate tubes into which part of the excess turbo pressure is directed to make the V6 engines louder. For road use, the engineers have to treat the exhaust gases and dampen the noise a bit.

The speedometer reaches up to 500 km/h and in the cockpit, designed for 2 people, dominates the spirit of Formula 1. The bucket seats can not be adjusted in the longitudinal way but the driver can find its best position adjusting the steering wheel, the pedals and the backrest. 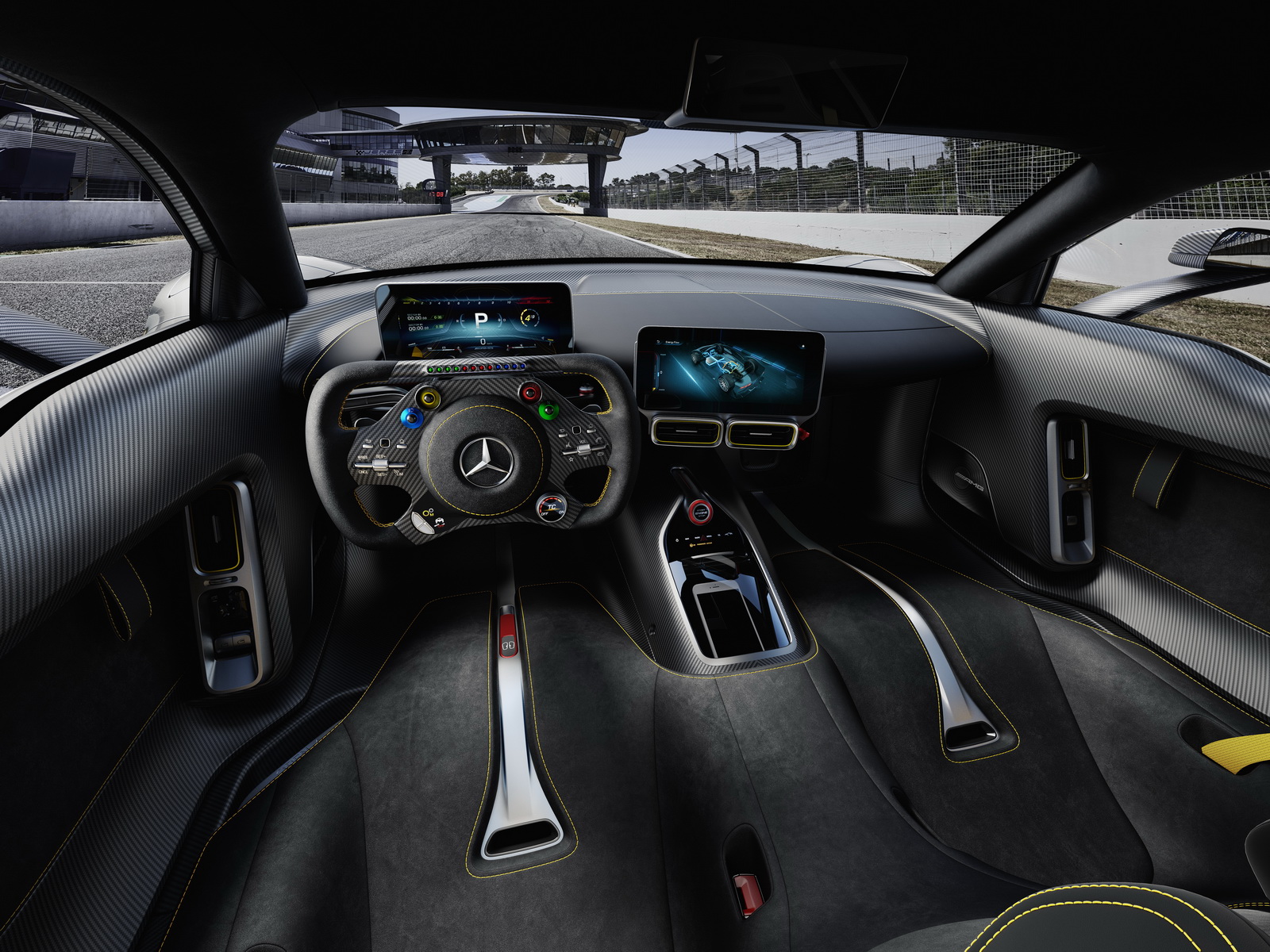 The steering wheel with integrated airbag is flattened at the top and bottom – like in a racing car – towering above the first of two ten-inch screens. AMG is installing the second one above the sparse center console. The rearview mirror was replaced by a mirror cam. The carbon-clad doors are opened in Lamborghini style and there are also electric windows and air conditioning.