It’s the final countdown. This is the race that decides the F1 champion

Elena Luchian, December 10, 2021
1.3K 0
Home Auto news It’s the final countdown. This is the race that decides the F1 champion

This is it. One more race and the season is over. But the one in Abu Dhabi is the race of all or nothing. The one that decides both the Drivers and the Constructors World Championship titles.

Mercedes-AMG Petronas and Red Bull Racing are still racing for the Constructors title with Mercedes leading by 28 points. Things are different for the drivers. The 7-time champion Lewis Hamilton goes head to head with Max Verstappen. With 369.5 points each, anything and everything can happen. It is the first time two drivers have the exact same number of points before the last race in 47 years. This makes 2021 the most fiercely contested championship in the history of Formula 1

Abu Dhabi Yas Marina is the stage the two Formula 1 VIPs will be performing on this weekend before the curtain drops over the Big Circus until next March.

Lewis Hamilton has been eating up the gap that separated him from Max Verstappen. The British driver won three races in a row, hunting down the Dutch. In Brazil, he charged from the 10th spot on the starting grid to bounce back on top and defeat his rival.

All or nothing in the race that decides the F1 champion

Time penalties for both of the two gladiators, one for Hamilton in Silverstone and another one for Verstappen last week. Engine penalties for both, two for Lewis, one for Max. Sparks came out and bits from their cars flew each time they got too close. Verstappen ended up on top of Hamilton – literally – in Monza. Christian Horner saying he’s not kissing Toto Wolff’s a**. Toto Wolff smashing his Bose headphones against the table in the garage when Hamilton and Verstappen collided in the Arabian Grand Prix. This season finale had it all. 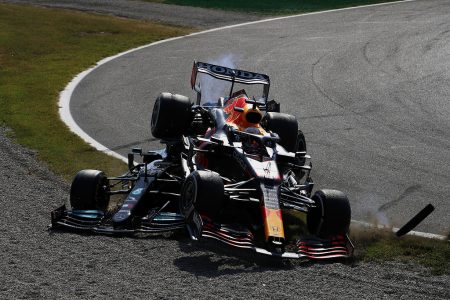 None of the two drivers showed any sign of breakdown. They seem as strong as mentalists on and off the track. Hamilton has been his relaxed self, while Max put on that same show of confidence.

Sunday is the day of the grand finale of an epic season. The first that is not predictable. The first that challenges Mercedes for the past eight years. Whoever passes that finish line first is going to celebrate. He will be this season’s F1 champion.

Mercedes-AMG Petronas announced they would be ending the controversial sponsorship contract with Kingspan signed last week. The company made part of the insulation used in Grenfell Tower, the building that burned four years ago. The devastating fire that started around midnight killed 72 people.

The survivors and relatives of the deceased had shown anger at the announcement of the deal. The team’s boss, Toto Wolff, met them last Friday and decided to take the company’s logo off the racing cars and drop the contract.

“Both parties have subsequently concluded that it is not appropriate for the partnership to move forward at the current point in time, notwithstanding its intended positive impact, and we have therefore agreed that it will be discontinued with immediate effect,” Mercedes showed in a statement.