Automotive News Europe awarded Dr. Dieter Zeitsche with the Eurostar for 2014, for successful growth strategy. Dr. Klaus Zehender, member of the Divisional Board of Mercedes-Benz Cars, Procurement and Supply received another award from the automotive publication.

According to a survey conducted by the Automotive News Europe publication, Mercedes-Benz received the top score from 100 suppliers, for joint implementation of innovative technologies with the suppliers. Daimler AG was the only car manufacturer to receive two awards from the automotive publication this year.

Furthermore, Dr. Deiter Zetsche said that “by 2020 we will bring eleven new models without predecessors on the market, while continuing the hybrid offensive”. Zetsche also stated that by 2017, nine more Plug-In models will take up the market, in addition to the already launched S-Class Plug-In Hybrid. 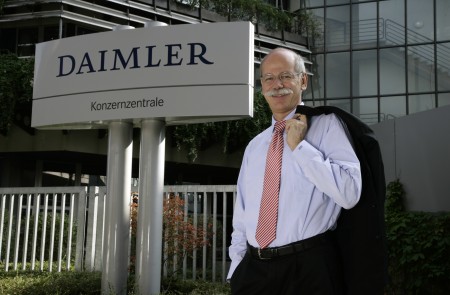 Automotive News Europe highlighted the expansion of Mercedes-Benz in the compact car segment. In addition to this, the introduction of new models have led to sales increase by 12,3% and more than 1,032,410 units in the first eight months of the year.

The automotive publication recommended the S-Class sedan which pushes the boundaries of technology, because it represents the pinnacle of engineering for Mercedes-Benz.

Automotive News Europe awarded 14 more Eurostars in different categories this year. The survey was conducted electronically from April to May 2014 by the auditing and consulting company Deloitte at the intention of Automotive News Europe. Daimler received the top score for its passenger cars division in June and received the award for the leading automotive company for innovation management in collaboration with the suppliers.