The all-new coupe of the C-Class classically places itself above the limousine and comes with a breathtaking design. But not only the design is the ace up its slave, but so is its road holding. First ever test with a Mercedes C 200 Coupe in Romania.

For the previous generation, Mercedes failed the experiment, at least in terms of image. The coupe of the C-Class was cheaper than the sedan and the Coupe that used to bear the E-Class indicative was actually using the C-Class platform and was placed between the C- and the E-Class. I said “failed experiment in terms of image” since the Mercedes’ coupes come with a noble tradition and the positioning of these models was not quite a good idea.

We have never spoken about design too much, but the new C-Class features superb lines. The rear side is highlighted, as it is inspired by the bigger S-Class, with its two-strip wide LED taillights, giving it a more dynamic stance on the road. Apart from the sedan, with its boot lid descending towards the rear, it is completed with an integrated sophisticated fin and the abrupt profile of the roof elegantly merges into it. Proportions are also different from those of the limousine. The coupe is by 37 mm lower and the gap between the firewall and the front axle is 60 mm longer, so that the coupe variant has an elongated front part. Starting with the driver’s door, the body is virtually different. 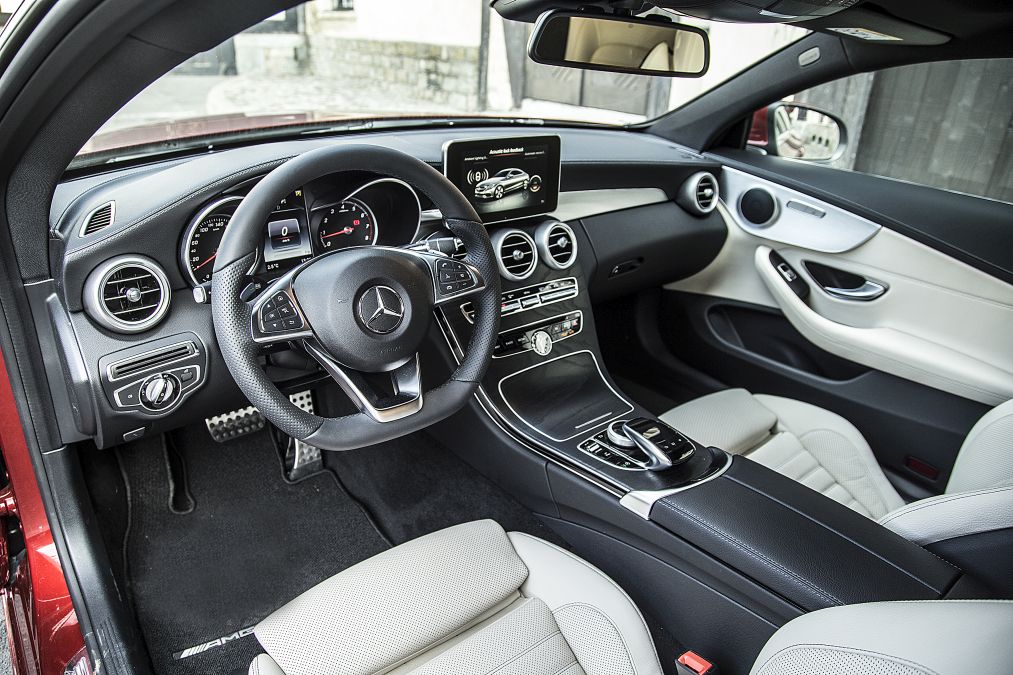 But on the inside, the globalization takes its toll, since we find the full C-Class dashboard in here. The AMG Package though, nicely customizes the interior and provides it with a myriad of options for only 2,558.80 euro, including the 18-inch wheels, the AMG kit, the matt black wood inserts in the center console instead of the piano black plastic, the Artico leather wraps the excellent sports with standard electrical adjustment for height and backrest reclining  (with 60 mm cushion length adjustment and lumbar support for 248 euros extra), sports suspension and sports steering. In the C-Class Coupe, the driver seats in a lower position than in the sedan and the feeling you get is like seating on the floor of a genuine sports car, while the sports seats provide an excellent side support.

For the test, we had the C 200 petrol variant, equipped with the 2-liter turbocharged engine with 184 HP, featuring a third generation direct injection system, mated with the automatic 7-speed transmission (the new 9-speed transmisision is available for the diesel versions).

50 kilograms lighter than the sedan and with a 15 mm lowered suspension compared to that of the limousine, the new C-Class drives extremely sharp for a Mercedes, particularly because the test vehicle was fitted with the AMG package with the sports suspension and the glorious Direct Steer system. 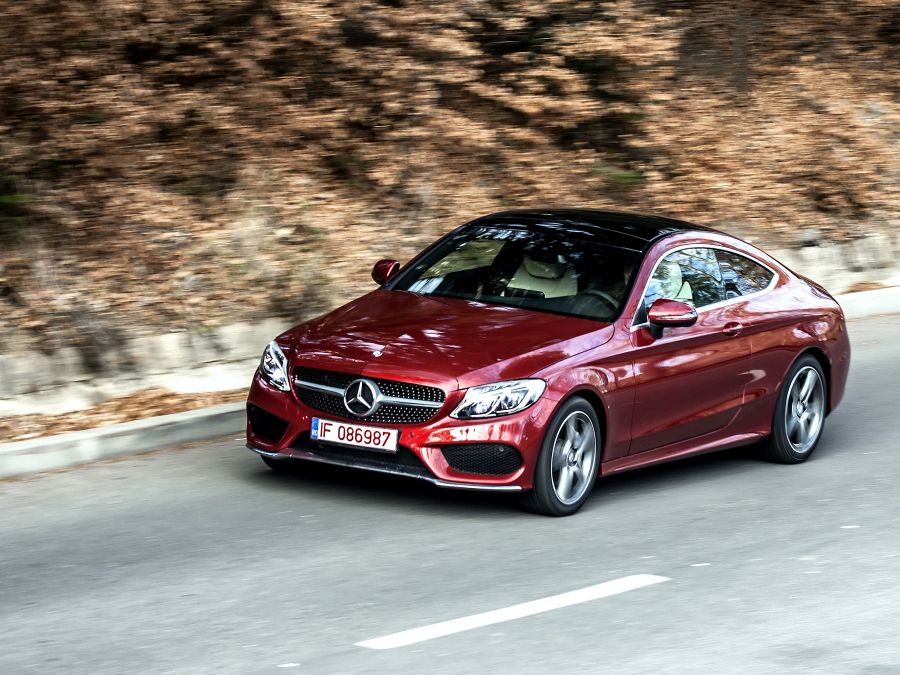 Shod with 18-inch wheels, suspension lowered by another 15 mm more and the adaptive drive train with five modes (Dynamic Select with the Eco, Comfort, Sport, Sport+ and Individual modes comes standard, with the AMG Package), which modify the response of the steering, the gearbox and the engine, the body roll is reduced and the precision on course is truly a paradigm. It is one the sportiest Mercedes cars I have driven in the past few years. Just like the A-Class, the C-Class Coupe will definitely get plenty of customers who have never had a Mercedes before.

Mercedes offers also a unique option in this class – the Airmatic suspension which can be adjusted in three modes using the Dynamic Select selector.
Who don’t want to pay for Airmatic suspension can choose also in combination with AMG package a comfort suspension lowered with 15 mm than the standard suspension.

The new  four link front axle absorbed from the C-Class significantly reduced the understeering and the pushing of the front axle forward caused a new weight distribution, favoring a more dynamics drive. It is just too bad that the ESP is quite intrusive and prematurely blows out the sporty momentum of the drive train.

The C-Class Coupe is currently available with 4-cylinder diesel and petrol engines, plus the C 63 AMG performance-oriented variant. The petrol engine is more suitable for the spirit of this coupe, since it is much lighter than the diesel, favoring an even better weight distribution. And other than that, the soundtrack is better than that of the not quite refined 2.2-liter diesel engine.

2 liters and 184 HP might seem too few at a first glimpse, but not at all. The engine responds spontaneously when pushing the throttle pedal, especially in the Sport+ mode, accompanied by a very congenial sound. It revs up easily and has a good torque in the mid-rev range. The moderate weight of 1,525 kg helps to get from 0 to 100 km/h in just 7.3 seconds, while the maximum speed is of 235 km/h.

With an improved Cd of only 0.26, which is a record in its class, the 2-liter turbocharged engine, mated with the 7-speed automatic transmission claims an official fuel consumption figure of only 5.4 l/100 km. That is not quite so in reality, but very good figures under 8 l/100 km in a combined drive cycle can be achieved, while a sporty drive never pushes it over the 10 l/100 km figure. We would not recommend the 7-speed gear box unless for comfort, because it damages the sporty spirit with its slow anticipation in downshifting.

The interior ambiance is similar to that of the C-Class, with the wide center console continued with the high center tunnel and with the 8.4-inch display of the Comand infotainment system, floating above the console. At the front, the room is decent, and, as a typical features of the noble coupes, the safety belt is fed by a little electrical engine. The windows in the front doors are frameless, but the B-pillar was not dismissed like it was in the S-Class Coupe. In the rear though, the space is quite tight, for the head as much as for the knees. But it is worthy that the 905 mm headroom at the back is by 4 mm more than in the previous model, considering that much was compromised in the name of design, compared to the predecessor. The through-going design also impacts the visibility at the back, but Mercedes offers as standard parking sensors. Only the rear-view camera, hidden in the logo, requires an extra cost (476 euros).

Compared to that of the sedan, the boot comes with 80 liters less, but 400 liters are still enough, especially because the 40/20/40 split rear bench comes as standard.

As I was saying, the coupe was placed – naturally – above the sedan. The C 200 Coupe starts at 37,604 euros, roughly 1,000 euros more than the limousine. It is a reasonable price worth paying for the design as much as for the sharp behavior.

The new C-Class Coupe is going to magnetize admiring glances, but will enchant those who will get behind the wheel, in the low seating position and with the sporty drive train, if the sovereign AMG Package should be ordered and with a special interior ambiance. And our recommendation goes towards the petrol engine, more suitable for the spirit of a coupe.