Donald Trump wants to drive Mercedes-Benz, BMW, Audi and Porsche off the streets of the U.S.

Donald Trump has declared war to the German luxury car makers. Mercedes-Benz, BMW and Audi are no longer welcome in the United States of America. The U.S. president has reportedly said he wants the European car brands out of the country.

The Trump administation opened the so-called Section 232 trade investigation, which may lead to a 25% increase on the car prices. President Trump had started the trade war last March, going into effect on Friday, at midnight, as the United States will begin to implement new and prefferential steel and aluminum tarrifs on Canada, Mexico and the European Union, instead making deals with countries such as Brazil, Australia and South Korea. 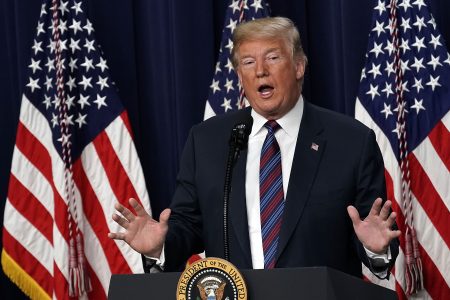 The new tariffs and retaliatory measures will make cars too expensive to produce, the increased manufacturing costs being passed onto consumers.

An excerpt from the German magazine Wirtschafswoche, says the Trump has told French President Emmanuel Macron that he is targetting to push the German carmakers across the borders of the United States.

Therefore, BMW and Rolls-Royce, Mercedes-Benz, Volkswagen, Porsche and Audi are now at risk, with the latter two being particularly vulnerable, since they do not have factories in the United States. Mercedes-Benz and BMW would rethink their manufacturing strategy in order to expand local production capacities if imports turn financially difficult. It is not the first time Trump slams the German carmakers. Last year, on an interview wiht the German newspaper Bild, the American president addmitted to be planning on imposing 35% tariffs on imported cars.

The car industry association in Germany, VDA, staed that its members exported 657,000 vehicles to North America in 2017, while the total exports of car parts, cars, engines amounting to 31.2 billion Euros in 2016. The German brands also have huge manufacturing centers within the territory of the United States, building 804,000 cars there last year, VDA reported, thus providing jobs for the U.S.-based citizens.

The Berlin authorities are calling for prudence in the tense transatlantic war that the United States has declared to the European Union.  “If the EU imposes countermeasures, it must expect Trump to come up with further measures”, said Dieter Kempf, the head of the BDI industry in Germany.