AMS pits the smart Forfour against an unlikely rival

The ties between the smart Forfour and the Renault Twingo are well known, but the German magazine Auto Motor und Sport feels fit to compare the larger of the smart family against another member of the enlarged Renault company.

The day a product of the Daimler Corporation would be compared to one from Dacia seemed like a very distant, if not improbable future, but the Germans at the well known Auto Motor und Sport publication thought otherwise. They decided to ask a question: is the smart Forfour worth the extra asking money compared to the much more practical and much less expensive Dacia Sandero?

The question’s absurdness is dampened by the fact both cars use exactly the same engine, since they’re now part of the same conglomerate. The extra premium you’d have to pay for a smaller, less useful car, but better looking and a million miles away in terms of interior quality? 4,000 euros, apparently.

The Germans are off to find out if this significant price difference is reflected in the overall attributes of the two cars. After all, 4,000 euros is almost half the Sandero’s asking price.

As mentioned before, they both use the TCe 90 engine, which is a 0.9 litre petrol turbo unit developing, as advertised, 90 CP. While both cars reach the maximum torque – 135 Nm – at the same rpm – 2,500 rpm – the Dacia is quicker to the maximum power output mark peaking at 5,250 rpm. Thus, the smart Forfour is slightly quicker in terms of 0-100 km/h acceleration and top speed, but only by a slight margin.

The Sandero is also less involving on a bendy road, having more body roll due to its softer suspension and less communicative steering, while the smart – with its rear wheel drive architecture – was always going to be more fun. And fun isn’t costly this time, the difference in fuel consumption between the two being of just 0.1 l/100 km.

When it comes to practicality, the contest is over, really. Dacia Sandero can accommodate five adults and still have a 320 liter boot space (expandable to a huge 1,200 litres). With it s rear mounted engine, the smart Forfour only has 185 liters of boot space to show and a very tall loading lip. Still, the smart does come with a host of innovative ideas which make the most out of the limited space, such as the individually tiltable backrests of the rear seats, for example. 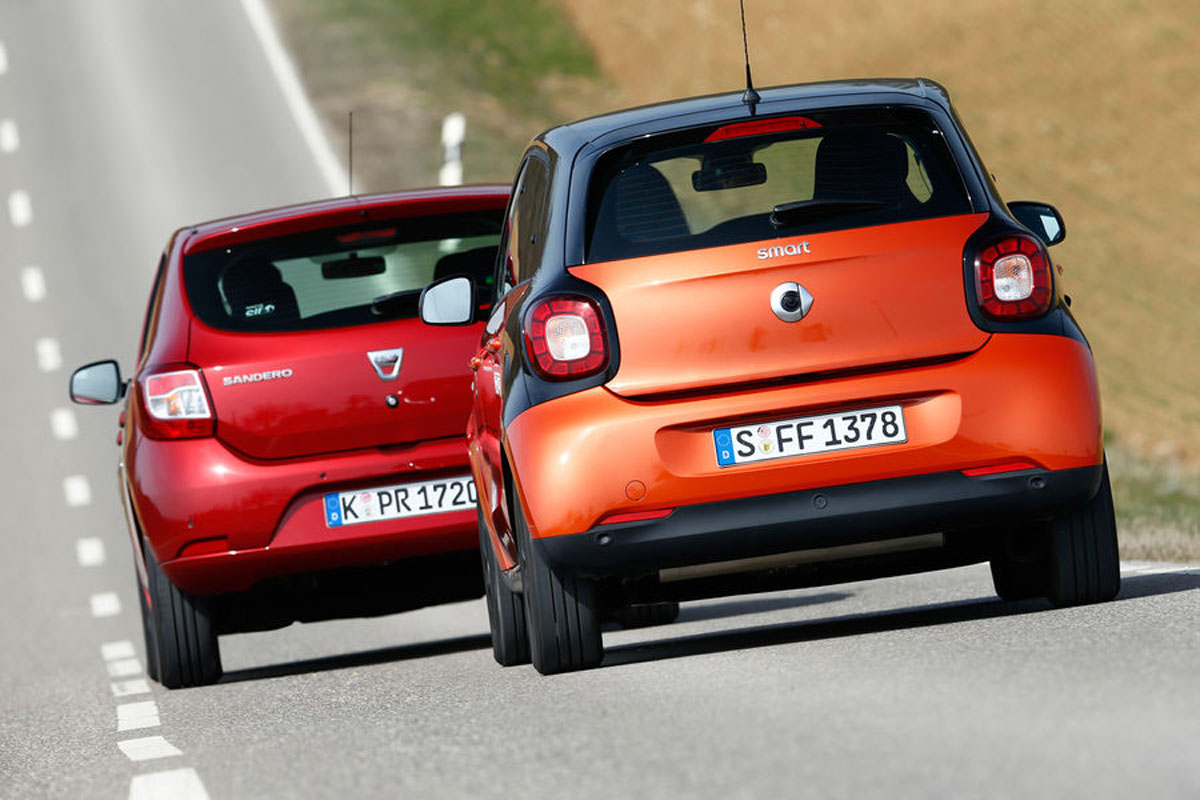 Bottom line, the Germans think that the price difference is perfectly explainable and justified, and we’d have to agree with them. When you buy a smart Forfour, you don’t buy a practical car, you buy a small, funky car that also happens to be quite practical for its size (it is half a meter shorter than the Sandero). The Dacia Sandero is an excellent car that delivers more than you would expect for such a low price. Still, it lacks the refinement and some of the features you get in the smart and the overall impression is that you have bought a very decent budget car, but still a budget car. The smart Forfour might share some of the features, like the key fob, the gear shifter or the navigation system, for example, but it manages to seamlessly integrate them into an otherwise very premium cockpit, as if they’ve always belonged there.

They’re two very similar and yet very distinct cars that talk to two severely distinct types of customers. That’s why the difference in price will never be noticed by the two groups of customers, as none will even think about the other car in this comparison.