What would it be like if there was a plug-in hybrid with zero emissions all throughout driving? Perfectly plausible, as the Mercedes-Benz GLC F-Cell is testifying.

I drove it. It is just as real as any car out there and does not stand out with any exposure tricks that would reduce its drag coefficient. Nope. Actually, if Mercedes-Benz would have failed to add several blue accents on the outside, it would have been next to impossible to distinguish it from a standard GLC, as what makes the difference is underneath its body: the world’s first ever fuel cell plug-in hybrid drivetrain. Of course, fuel cells have been used for propulsion before and the most iconic model series of such kind are the Honda Clarity and the Toyota Mirai, currently on sale. Apart from them though, the GLC F-Cell additionally comes with the possibility of charging the accumulator when directly connected to a power socket, not only with hydrogen. Are you confused now? It’s perfectly natural, that’s why let us briefly explain how the system operates. 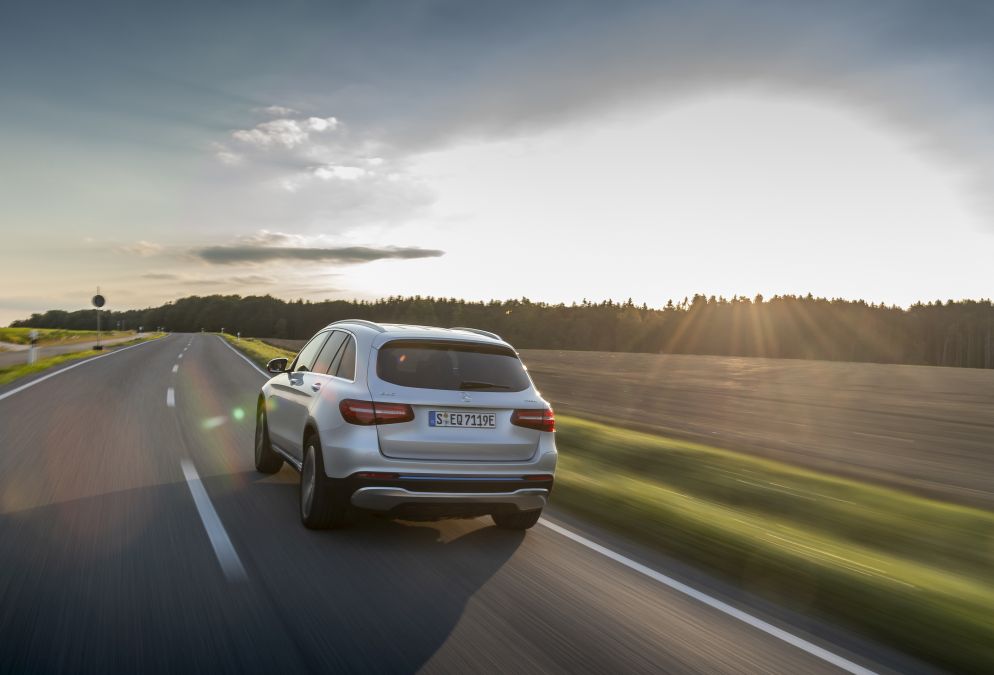 Under the engine lid, there is now a package of 400 fuel cells, with a parallel layout, as books on a shelf, capable of producing 1.0 volt each. Thus the whole system produces a 70-kW current with a voltage of 400 V. Approximately 7.4 kW are used to charge the 13.5-kWh Li-ion battery (with 9.3 kWh are usable in practice) located in the boot, as the rest of it is used to directly supply the electric motor. The battery can also be supplied by a socket, with 7.4 kW maximum, in approximately 1.5 hours, thus saving the hydrogen from the tanks. And even simpler than that, there is an electric motor engaging the rear wheels, that can be supplied either from the battery, either from the fuel cells or both simultaneously, depending on the load it operates with. You can therefore drive in an all-electric mode for approximately 50 km and 478 km more with the  4.4 kg of hydrogen stored in the two tanks: one located beneath the rear seats (the rear passengers sit 40 mm higher than in the GLC) and the other one longitudinally positioned, where the camshaft used to be. 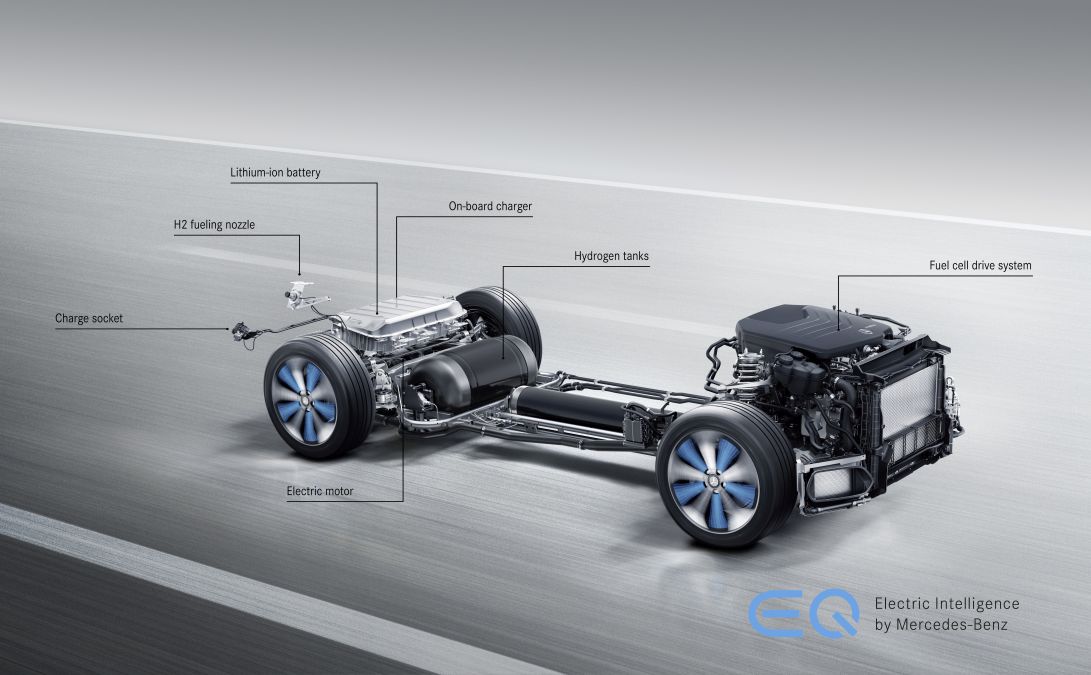 The Germans’ great breakthrough is building a system that is 30% more compact than the previous version, which allowed them to “squash” it into a GLC and the fact that the entire package weighs just 100 kg more than a plug-in hybrid drivetrain with a gas engine and similar performance. Operation is slightly impacted by the reduction of the boot volume and the raising of the loading lip, due to the presence of the battery underneath the floor.

The driving experience is… serene: noise-free, flick-free from the drivetrain, roll-free, the kind of roll caused by the road bumps. We started off from Stuttgart, with the battery full (range shown 45 km, total range 520 km) and began to explore the driving menus: there are three driving modes (Comfort, Eco and Sport) and four operation modes (Hybrid, F-Cell, Battery and Charge), that can be selected if I choose Comfort or Eco. I selected the combo that provides me with the perfect balance between dynamics and efficiency: Comfort and Hybrid. Regardless of having driven using the energy stored in the batteries or using the hydrogen in the tanks, the noise inside the cabin was extremely low. Practically, the feeling is similar to that of an all-electric automobile. The fuel-cell system sends no shock when it comes up to the rack engaging the electric motor, so the entire experience is extremely seamless. Pay attention though: seamless is nowhere near slow, because the 365 Nm are instantly felt when pushing the throttle pedal. Actually, the traction is constant and the peep of the fuel cell, similar to that of the starship Enterprise, is difficult to hear inside, so, to make sure if it operates, you must select the display of the energy flow on the central screen.

19 km from the start, with urban sectors and national roads, the consumtion displayed was of 0.3 kg/100 km of hydrogen, plus 15.8 kWh/100 km of the socket-charged power. I thus managed to raise the range of 520 km initially displayed by 4.4 km, with the AC on, which certifies the figures communicated by the car maker. On bends and upon braking, you can feel the extra weight, but the rear self-levelling air suspension reduces body roll and provides relaxed driving.

I then reset the dashboard computer, selected the Sport mode and drove a bit more pushy and, 47 k later, the consumption was of 1.0 kg/100 km of hydrogen, plus 8.4 kWh/100 km that had been charged from the power outlet. Conclusion: the fuel cell was active for a longer time, in order to supply the necessary power. The price of a kg of hydrogen in Germany is of approximately 13 euro, so, if you charge your battery, free of charge, from the public stations, the cost per 100 km is of 4 euros if you should select the Comfort – Hybrid combo and of 13 euro/100 km for sporty driving, in the Sport mode. There must be though considered that it is permanently driven with zero emissions.

Initially, the model shall only be available in Germany, not for purchase, but for long-term rent. The package proposed by Mercedes-Benz alo includes maintenance and possible repairs (quite unlikely, since the system was tested along three decades of development, covering a distance of 18 million kilometers). The main issue that affects the spread of the technology seems to be the lack of a solid hydrogen-charging stations network. In Germany, there are such stations in the main cities, but by the end of 2019, their total number shall grow to 100 charging stations.

A one-of-a-kind drivetrain: you can choose to charge from a power outlet, driving for 50 km with minimum costs (or even for free) or to use the hydrogen to increase the range with over 450 km. Regardless of what you choose though, you won’t give off a single gram of CO2, NOx, nor particles, but water vapours the most.