The all-new Mercedes Clasa C Cabriolet takes the luxury and comfort levels to where they have never been before. Can the classical BMW 4 Series Cabriolet stand up to it? Testing the brand-new Mercedes C 250 Cabriolet vs BMW 420i Cabriolet.

On the other side, BMW drafted a clean-cut strategy. In 2007, the coupe and the cabriolet have been divided by the 3 Series, setting up the newly created 4 Series. Thereby, BMW 4 Series gave up on the canvas roof of the old 3 Series Cabriolet generation favoring a new retractable hardtop, a solution also used for the latest generation that saw the light of day in Las Vegas in 2014.

Even though it was Mercedes who promoted the first ever retractable hardtop, the company never used it on the 4-seat cabriolets, as they exclusively came out with a canvas roof. Therefore, there’s not only a traditional confrontation between rivals BMW and Mercedes, but also a battle between two differently designed roof systems.

The detachable hardtop roof of the BMW takes up a lot of space in the trunk and its complex mechanism impacts the modularity of the luggage compartment, even when the roof is on. BMW only announces the maximum boot limit, which is 10-liters bigger than that of the Mercedes. But, apart from the Mercedes, the Bavarians have come up with an ingenious solution. At just about any cabriolet, if you want to load the luggage in the trunk, you must put the roof on, load the baggage and then take the roof back down again. That is why because the space under the lid protecting the roof from the rest of the trunk contains is quite small. We measured 25 cm for the Mercedes and 27 cm for the BMW. By pressing a button in the trunk lid of the BMW, the entire folded roof lifts by a few centimeters and enables loading.

Both models provide decent space in the rear seats, with the BMW offering a slight advantage in the knee room, and the model also comes with a central armrest and offers a more comfortable seating, thanks to a wider angle between the seating area and the bench than in the Mercedes. The Benz features the same interior width in the rear, but has no armrest and the backrest is too upright. Instead, the Mercedes provides a better access in the rear, as the door opening is wider, the seats are better configured and enables a 50-50% split, with the segments able to electrically fold by the help of two buttons placed in the boot. 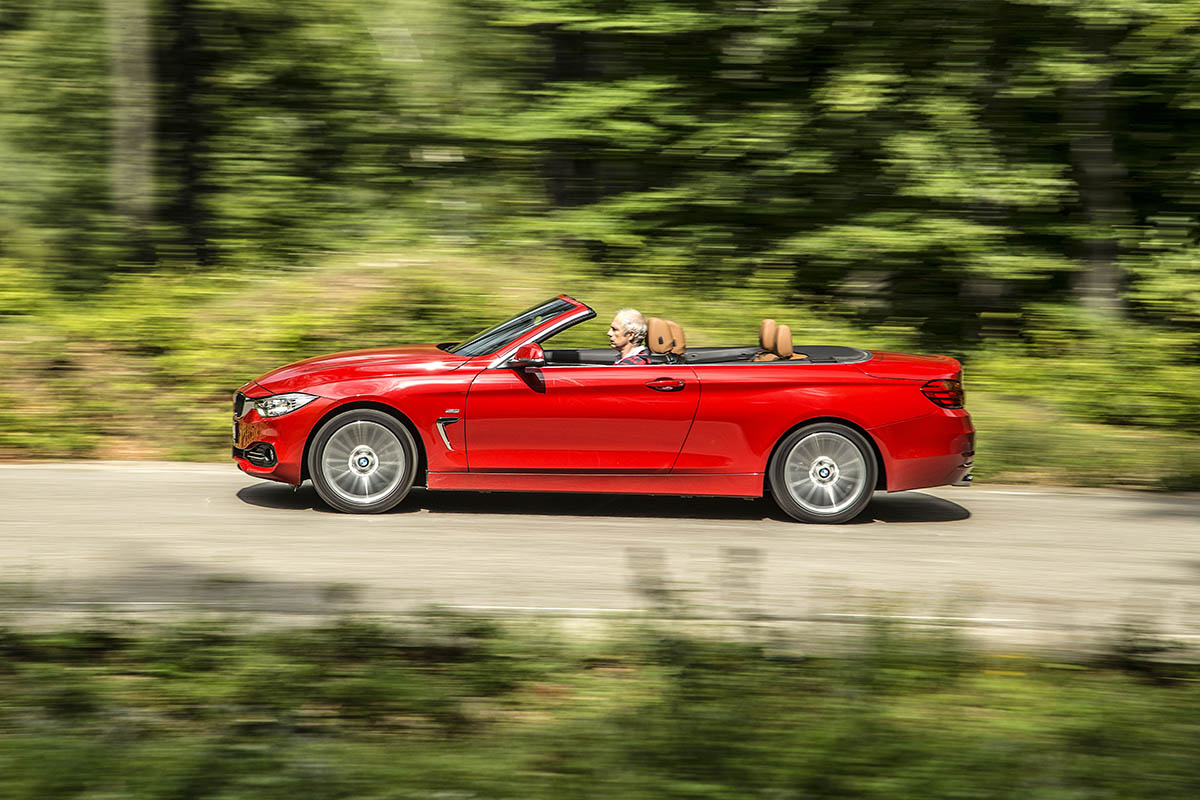 But the Mercedes is a true gentlemen with good manners. A little engine brings the safety belt ready at hand and you don’t need to turn your body like in the discus throw. The easy-entry mechanism of the front seat is simpler than in the BMW, as you don’t need to press any button at all, only pull the backrest lever and the seat moves forward, powered to easy access in the rear. And once you bought the 4-seat cabriolet, in order to constantly have four occupants travelling in the car, then it is worth spending 821 euros on the ingenious AirCap system. By pressing a button, a windbreak lifts on the edge of the windshield and a wind deflector comes out from behind the rear seats, so that the rear passengers are better protected from the wind than in the BMW. If there are only two people onboard the car, then it is more efficient to tick the classic wind deflector box, that is installed behind the front seats for 351 euro in the Mercedes and for 367 euros in the BMW, featuring a similar structure.

The interiors of the two models are similar with those of the coupes they derive from, so there isn’t much to add. Additionally, we only find the cabriolet specific buttons, with an extra logics for the Mercedes. The center tunnel hosts the switch for folding the roof, flanked by the button for the simultaneous drop of the four windows and that for the AirCap system activation. Traditional for Mercedes, the commands for the power adjustment of the front seats is located in the door, next to three other tiny buttons for seats heating and ventilation and for the AirScarf system.

In the BMW, the buttons for the similar neck warming system are located in the center tunnel next to the one activating the roof. For this test, the Mercedes came with the basic Audi 20 CD infotainment system, with a 7-inch display fitted with a touchpad (131 euro, standard for the Comand Online) and with the Garmin navigation module (595 euro). By comparison, the iDrive system of the BMW is obviously superior when it comes to screen resolution, but also more intuitive when it comes to commands. Besides, the BMW display features a more premium look and seems to be an iPhone screen in terms of clarity and resolution.

Generally speaking, the BMW 4 Series is slightly lighter than the Mercedes C-Class Coupe. But this is not valid for these cabriolets. The hard top of the BMW adds weight to the car weighing 1.790 kg compared to only 1.665 kg for the Mercedes. Oddly, the bigger weight of the BMW does not impact the cornering. The Bavarian is sharper and, behind the wheel, you feel it lighter, with a lower gravity center, even though in theory, the hard top lifts it. Additionally, in the BMW, the seating position is 2 cm lower and the steering is sportier and holds a better feedback. 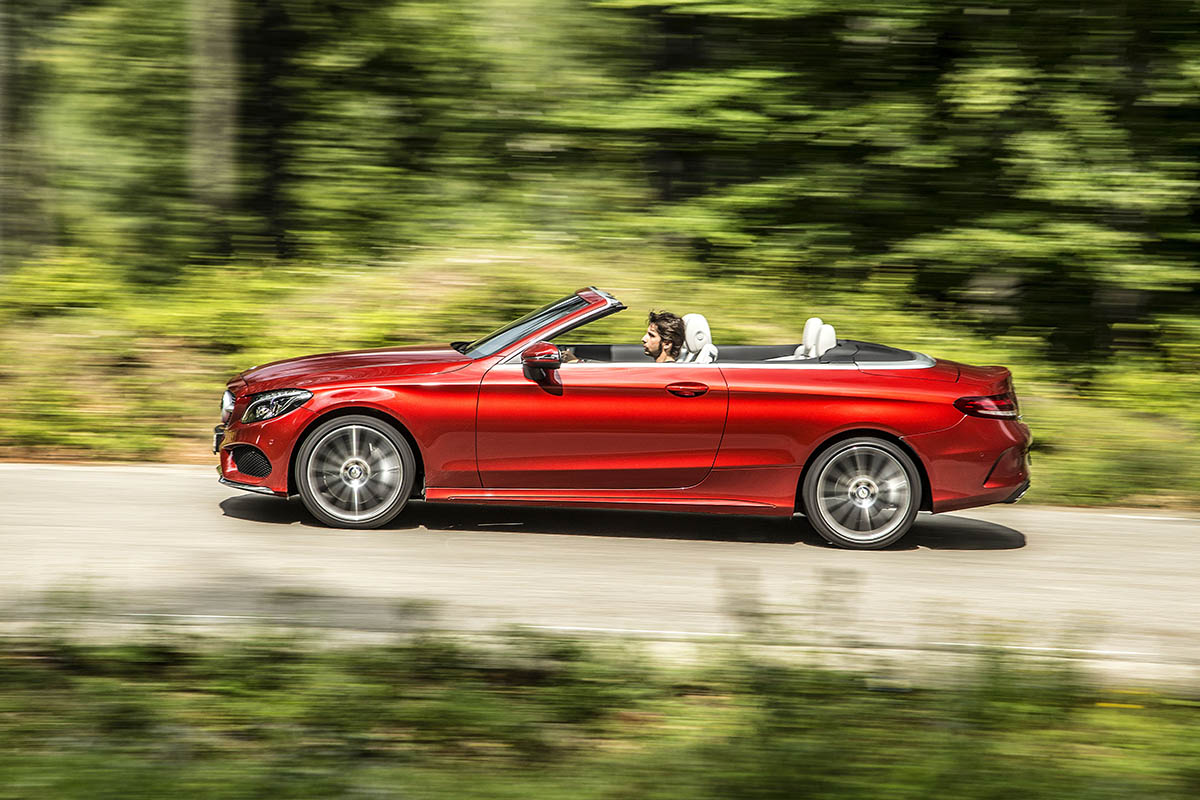 Instead, when it comes to longitudinal dynamics, the Mercedes is quicker both because of its lower weight as well as thanks to its output, but especially thanks to the better torque.

Thus, the Mercedes engine provides better acceleration and in-gear acceleration, supported especially by the high torque and low weight. The new automatic 9-speed gearbox of the Mercedes shifts smoothly and is very flexible thanks to a wide range reduction ratio between the first and the ninth gear. Instead, the famous 8-speed transmission of the BMW anticipates better when downshifting, which is also obvious when coming out of corners.

The BMW 420i Cabrio was fitted with the Luxury line, while the Mercedes featured the AMG package and additionally, 19-inch wheels instead of the standard 18-inch ones included in the AMG package. Both models featured an adaptive drivetrain with four driving modes in the BMW (Eco, Comfort, Sport și Sport+) and five in the Mercedes (Eco, Comfort, Sport, Sport+ and Individual) adjusting the feedback of the gearbox, engine and steering, but none of the models had the adaptive suspension – the classic for the BMW and the pneumatic in the Mercedes. The BMW brings a better comfort compromise, because the big 19-inch wheels with narrow beads of the Mercedes impacts behavior on poor roads. On good asphalt, the Mercedes suspension feels somewhat softer.

Entering the world of the mid-size premium cabriolets doesn’t come cheap. The BMW 420i, the cheapest 4 Series cabriolet, starts at 44,300 euros. A C 200 with similar output starts at 44,238 euros (Mercedes even has a 1.6-liter turbo engine with /156 HP priced at 42,215 euros), but the C 250 starts at 49,474 euros, which, apart from the BMW, standardly includes the automatic gearbox and the LED headlights, optional for the BMW. Apart from that, the optional features are pretty much the same and a luxury-fitted car, but not a top of the range one, even leaps over 60,000 euros.

The Mercedes C 250 Cabriolet is more luxurious, more extravagant and provides better wind protection when there are four passengers in the car. The BMW 420i Cabriolet is sportier despite is bigger weight due to the hardtop. The BMW features a way better infotainment system and a genius trunk loading mechanism. The Mercedes holds a more potent engine and is faster in a straight.