It was Lewis Hamilton to set the pace at the year’s first qualifying session, for the Australian Grand Prix. The three-time World Champion blew his rivals away and comfortably set himself on pole. His Mercedes-AMG PETRONAS Motorsport teammate, Valtteri Bottas, badly crashed his car and will start from the tenth spot of the grid.

There were mixed feelings in Australia for the Silver Arrows, seeing one of their drivers get the best time on the racetrack and the other one’s drama for slamming into the wall in turn 2 and having the qualifying session red-flagged. The car ended up with the right side totally damaged and with both axles broken.. The Fin though walked away unharmed, but the stewards needed minutes to clear the debris scattered across the racetrack.

The two Ferrari-s followed Lewis Hamilton, with Kimi Raikkonen outpacing teammate Sebastian Vettel, both ahead of the Red Bulls driven by Max Verstappen and Daniel Ricciardo. The local favorite though will start three places further back due to a penalty for a speeding offense during practice, dropping him to eighth. Kevin Magnussen from Haas will be promoted in his fifth place, best ever grid slot ever for him.

The moment of truth is tomorrow, at the year’s first Formula 1 race! Stay tuned!

Update: Valtteri Bottas needed to change gear box, a move that relegated him down to the fifteenth position on the starting grid. 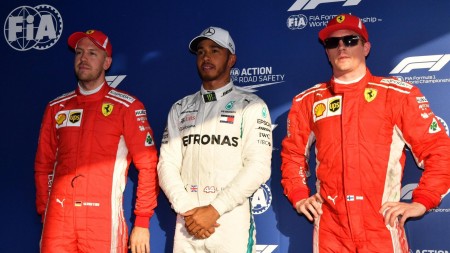