Mercedes-Benz has just pushed the throttle on the “Best Never Rest” campaign, that previews the football World Cup that will take place in Russia, in three months’ time. The campaign runs on social media and in stadiums across Germany.

The stars of the German national soccer team have teamed up with the Mercedes-Benz C-Class in the campaign for the World Cup, that will debut on June 14th in Moscow. “Always keep on moving, keep on fighting, don’t rest on your laurels – this is what THE TEAM stands for and this is what we stand for”, says Dr Jens Thiemer, Vice President Marketing Mercedes-Benz Cars. “This attitude is driving the German national football team on their path to that fifth star representing their fifth title. And this ambition always to continue developing and as the best to become even better, now has a name with our campaign: ‘Best Never Rest’.”

A brilliant performance in the Qualifiers has confirmed that Germany is definitely not sleeping on its laurels. “We’re starting from an outstanding basis”, says Oliver Bierhoff, Manager of the World Champions. “But that isn’t enough. To take the title we can’t allow ourselves to repeat the mistake we made in 1990 and rest on the laurels of our World Cup title. In order to remain the best we always have to continue developing, we must never stand still.”

The motto of the campaign “The Best Never Rest” inspires the coach and the players. “This is precisely the stuff champions are made of: they’re not satisfied with what they’ve achieved, they’re greedy for the next success. We need this fighting spirit and absolute will to win in Russia in order to overcome such strong and hungry opponents as Spain and Brazil”, says National Coach Joachim Löw. 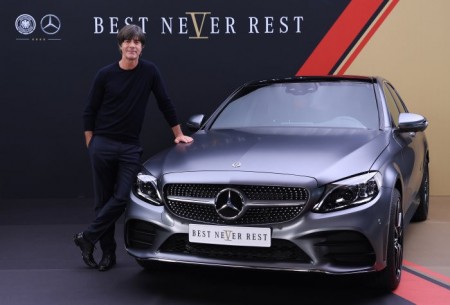 The campaign has already debuted on social media and will start on the 23rd of March in Dusseldorf, at the Germany versus Spain friendly match. The team bus and team vehicles will be adorned with the campaign claim from this point in time. From May up until the Final the communications will continue with TV advertisements, out-of-home advertising and point-of-sale activities. The logo of the premium car maker and the campaign motifs will feature on vehicles and players equipment.