Rosberg is a rocket in a Baku! The Mercedes-AMG PETRONAS driver back on top

Elena Luchian, June 19, 2016
2.12K 0
Home Motosport F1 Rosberg is a rocket in a Baku! The Mercedes-AMG PETRONAS driver back on top

Nico Rosberg took his fifth victory of the season in the inaugural Grand Prix in Baku, and he did it in style, leading every single lap from the pole to the very last lap.

Starting from pole, Nico Rosberg got away and, seven laps into the race, he already had a 10-second lead. At the opposite end, Lewis Hamilton hardly managed to keep his 10th position during the first laps.

Trapped in a group with Bottas, Hulkenberg and Grojean, Hamilton had had enough of being super prudent and he made his way into the 4th position, 24 seconds away from teammate and main rival, Rosberg, who seemed now to be in a whole different league, one of his known. The German’s faith was skyrocketing by the time he changed to new softs and came out on the track to retake his very comfortable leading position in the 22nd lap.

Halfway through the race, Hamilton seemed to lose kinetic energy and, naturally, time. He complained about it to the team, but there was nothing regulation allowed them to do. “I will press everything to find what’s wrong”, was Hamilton’s child-like solution. The world champion was wasting time, as Rosberg was breaking the lap record.

The problems for Fernando Alonso kept coming, as the Spaniard’s team McLaren told him to box in the 44th lap. He never came back out, but the Spanish star Enrique Iglesias tried to console him. 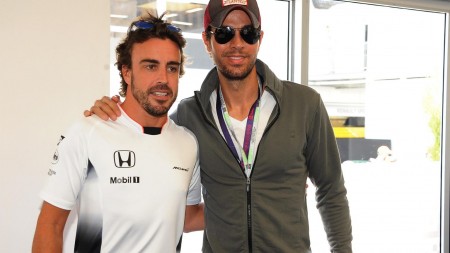 Towards the end, with 8 laps to go, Hamilton was told he had become the fastest car on the track. But the Brit was 14 seconds away from the 4th position, the one covered by Perez.

The fight for the third position was the highlight of the end of the race, with Perez less than a second away from Ferrari’s Kimi Raikkonen. The Finn had got a 5-second penalty in the 37th lap for crossing the white line at the pits, so the Mexican from Force India would easily get on the podium if he stayed within 5 seconds from him. Perez eventually passed Raikkonen on the track.

Against all odds, the inaugural race in Baku was just the second round of the season to pass with no Safety Car or Virtual Safety Car deployment.