The Mercedes-Benz covered in Swarovski was sold

Reports from the last weeks made the young business student famous all over the world. The streets were filled with paparazzi and flashing lights as the glamorous Mercedes CLS 350 was showing off on the London streets, thus her celebrity status was to be expected.

Daria Radionova received the car as an early birthday present from her parents with a special number plate BAII BYY. Now she decided to put it for sale on eBay and donate the money to charity. Yesterday, the Mercedes CLS 350 was sold for £154,600.

Read more about the shiny Mercedes-Benz

Some of the money will go to Manchester and Cheshire Dog’s Home that perished in fire earlier this year. Daria Radionova said that the car cost at least £25,000, with an additional £20,000 spent for the Swarovski ornaments. “They spent 12 hours per day for two months. I’m very happy with it – everywhere I go people look at it”, she stated proudly. 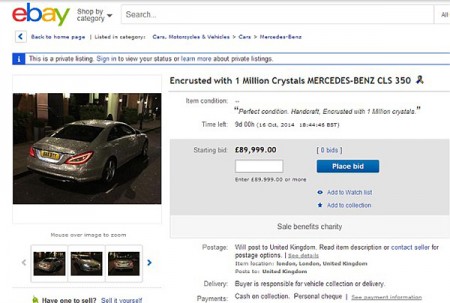 As you can see from the picture above, the bid on eBay started at £89,999,00 and, after twenty five offers made before the final day it was sold at last. The car has had before two owners and more than 57,000 miles on clock.

“It’s rather dangerous to leave it on the streets. People always try to take some of the crystals”, Daria added. After all, she sold it at a higher price, so the odds were in her favour.