Recently, Mercedes-Benz launched a new generation of the company’s micro-brand – Smart – showing not only two brandnew models at the same time (Smart Fortwo/Forfour), but also a real philosophical concept of urban survival.

After filling up the planet with colorful watches, the owner of Swatch, Nicolas Hayek, thought of expanding his unconventional ideas in the car industry, trying to give a practical solution for the insane heavy traffic of the big cities. But the idea was not enough for giving birth to a new automobile, as he also needed Mercedes to interfere (with a 100% involvement in the end), back in 1994. Eventually, the year 1998 meant the big bang of a brand (actually, just a single model at that time) that was completely different.

Right from the very beginning, Smart was very controversial – lovable, but hard to be taken seriously, perfect for the city traffic, but as expensive as a compact car, very small on the outside, but incredibly generous on the inside, even for tall persons, an itsy-bitsy engine, but a limousine fuel consumption, with quite an austere interior, but such complicated technical solutions… These are only few of my own feelings as a Smart user. I cannot forget the curiosity of those who were seeing, for the first time in their lives, a Smart in traffic, but neither the silliness of some big strong cars drivers, almost wishing to crush this toy that dares to challenge them. 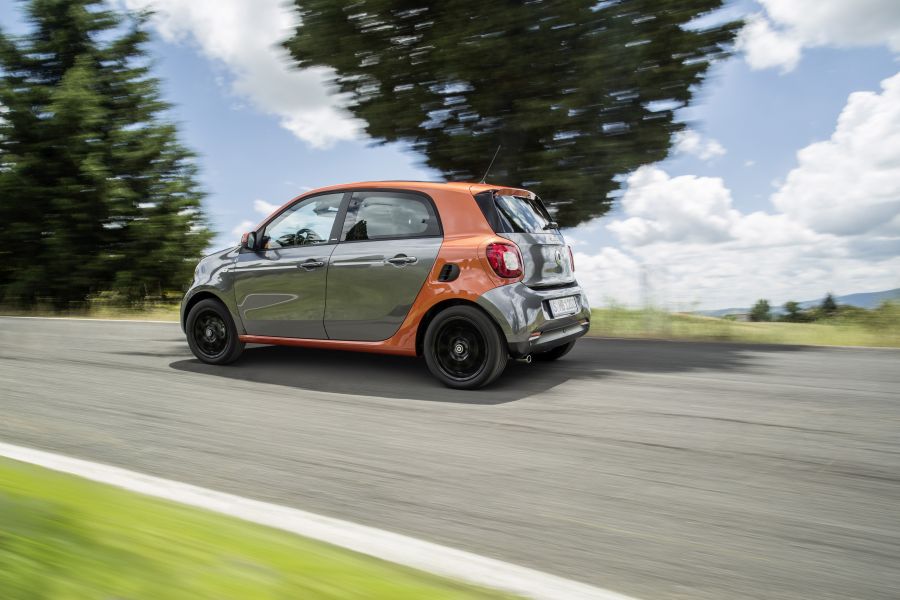 All in all, Smart Fortwo managed to find over 1,5 million buyers, with an approximate average of 100 000 per year, not enough to surpass its own niche category.

Finding it hard to survive with a low units manufacturing number, Smart also had some attempts to expand the range. Their idea for the Forfour is worth mentioning. It was actually a Mitsubishi Colt wearing the diguise of a Smart. But the high prices for such experiments, that never brought a financial key as high as them, reduced the label down to a single model, as the efforts for the development stayed focused on other options. It was exactly how the third generation showed up in 2012, the electrical Smart, one of the landmarks of the segment (5th place in worldwide sales of electric models in 2013). 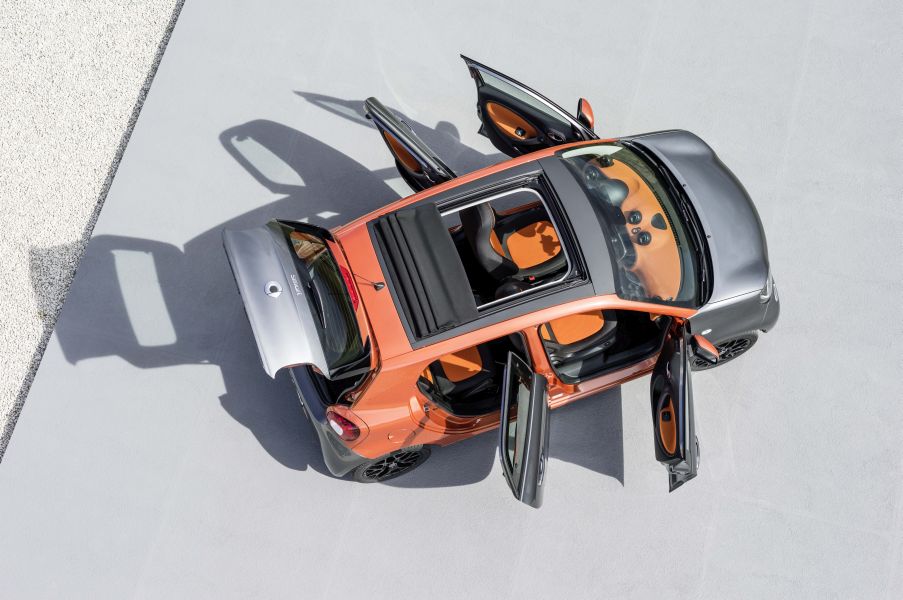 Despite the trouble, Mercedes did not surrender when it came to the thought of asserting inside the mini area. They keenly worked for the new Smart generation, but chose different directions, to avoid the previous problems. The most important decision was enrolling a partner that would provide part of the solution and, obviously, cover for part of the expenses. We are talking about Renault, and Mercedes sincerely admits the partnership in all the press releases and all the statements. There couldn’t be any other way, as long as the Forfour version is actually manufactured in the Renault factory from Novo Mesto in Slovenia, together with its twin sister, Renault Twingo, and the 1-litre petrol engines, together with many parts (some are visible, mostly on the inside), also come from the French. 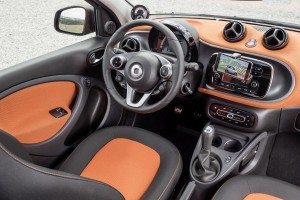 To capitalize the platform, Mercedes also had a partnership with Renault, as the Forfour version is produced by the Renault factory in Slovenia

One other decision that massively concurred to lower the expenses was the idea of making a Smart family (Fortwo and Forfour), from the very beginning. The two are actually similar. The main difference is the prolonged cockpit, so the second seats row and the rear doors would fit in. The rest of it… copy – paste, starting with the headlamps and ending it with the tail lamps, or starting with the driver’s seat and ending it with the front axle. And this is as natural as drawing a breath.

The global urbanification, the urban mobilty and the quality and joy of the urban life… These are only a few concepts that based the new Smart generation. Starting from a reputation already built faster than any other world car brand and benefitting from the token image of urbanity, Smart desires to be a viable answer to all the problems of the present time, but especially to those of the near future. Smart puts together the functional and the emotional, it mirrors a certain attitude of the user, it concurs a bigger urban space and leaves it unoccupied for the people. It also accomplished the mobility mission, without striking off the modern standard of security and comfort.

Smart stayed true to the idea of having „all in the rear”, that was also drawn-out to the four-door version, Forfour. This is how they could do midget front and rear consoles, that directly effect the preservation of the dimensions without growing out of the mini-dimensions (Fortwo is only 2,69 meters long). It also manages to get a record number for the turning circle – 6,95 meters for the same Fortwo.

The new Smart generation does not compromise. Forfour also absorbs the „all in the rear” solution.

At first sight, the silhouette is that of a classical Smart, but the oversized headlights, relatively similar to those of the previous generation, and also the grille bring in a more cheerful, a more optimistic Smart. The colour, highly present and almost impossible to choose, also leads to this. Actually, there are more than 40 colour combinations between the car body and the side panels. 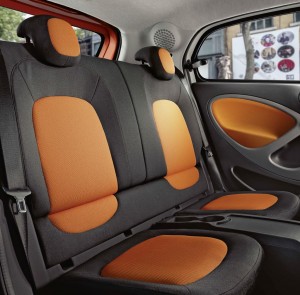 There is plenty of colour on the inside too, creating an environment that, no matter the mood, it brings the joy of life. This feeling is also helped up by the round shapes, some looking like toys, as the air-vents. The speedometer half-round indicator brings back the former generation.

From another point of view, the Smart also has a lightly agressive image, emphasized by the vents located on the rear fenders.

Three petrol engines will be available. At start, Smart will be powered by the 1 litre 3 cylinder natural aspirated with 71 HP. In december will follow a 0.9 litre turbo from Renault with 90 HP. Later, a basic version with 60 HP will be offered. But the major change is the gearbox and the current owners know it very well how imperative this was. Nowadays, drivers can choose between a manual 5-speed gearbox (it is a first for Smart Fortwo) and a 6-speed automatic dual clutched one (twinamic, from spring 2015). The former one is likely to be simply different when it comes to comfort (changing gears was practically a nightmare in the former generation) and also to the fuel consumption.

Farewell, robo-banjo! The new generation has a classical manual gear or an automatic dual-clutched one

Despite the mini-dimensions, Smart provides maximum safety, as it preserves the Mercedes standards. A major caution was granted to the safety cell, as the purpose was keeping it inside the safety limits, even when colliding with bigger vehicles. This adds up to the active security systems, as crosswind assistance, available for the standard version.

This is, in brief, the story of the static launch. Naturally, we will come back with more details, after we get to drive the car.