The partnership between Sony Computers Entertainment and Mercedes – AMG marks the launch of a new game on PlayStation®4. Mercedes announced that after the official launch, that took place on 9 September, the car will feature exclusively in the DRIVECLUBTM game from Sony Entertainment.

But there is more. Journey of Stars is an online global competition available in a variety of social networks such as Facebook, Google+ and Twitter. Gaming enthusiasts can test their abilities against their friends until 9th of October, using the www.journeyofstars.com platform. Furthermore, each winner will receive a PlayStation 4 and a copy of the DRIVECLUBTM game. In Europe it will be available starting 8th October 2014, just 4 weeks after the launch. The fans will be able to download the new game for free, but only in the first week. AMG GT is not the only Mercedes model featured in the DRIVECLUBTM game, and if you look for more AMG power you can choose between A 45 AMG, the CLA 45 AMG, the C 63 AMG Coupe Black Series, the SL 65 AMG and the SLS AMG Coupe Black Series. 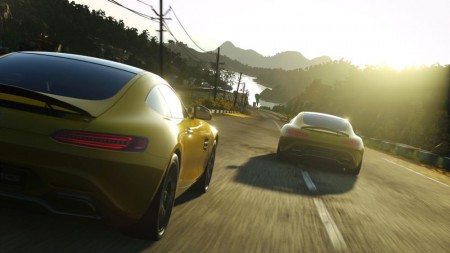 Thanks to the Evolution Studios, that had access to Mercedes AMG GT test track, the sound and every other aspect of the car were recreated with great accuracy. Mercedes is the premium manufacturer with the widest line-up of models in the game.

DRIVECLUBTM is not just a game where you have to win. It is all about teamwork, fighting for one another and earning rewards together. But, more importantly, it is about feeling the thrill of every race and sharing it with your friends. It also allows the gamer to connect immediately with friends, to share experiences and to send and receive challenges.

DRIVECLUBTM was designed with the next-generation gamer in mind and it makes you actually feel the euphoria of driving one of the most powerful cars in the world.