Mercedes AMG Petronas was crowned king in Formula One. But instead of crowns, the winners got Russian hats and were awarded the race trophy by none other than Russia’s president Vladimir Putin.

Lewis Hamilton won the Russian Gran Prix and his points made Mercedes AMG Petronas knock down the 2015 Formula 1 Constructors’ Championship. It all happened after Kimi Raikkonen from Ferrari was given a 30-second penalty for causing a collision with Valtteri Bottas of Williams. Nico Rosberg’s retirement did not affect the squad’s race to victory. It is the second consecutive F1 title for the performance division of Mercedes. 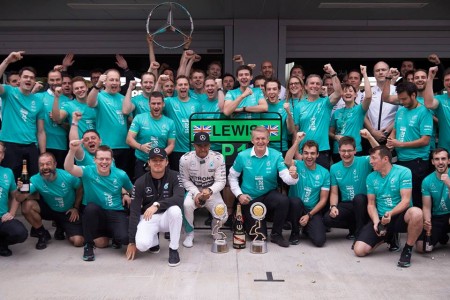 They are the world champions! Congratulations!

With three rounds to the season’s finale, Mercedes AMG Petronas leads the ranking with 531 points, while Ferrari stays behind with only 359. The Italians can though find consolation in Vettel’s getting by Nico Rosberg, to fetch the second position in driver’s ranking.

Congratulating the team, Chairman of the Board of Directors of Daimler AG, Dieter Zetsche, said, “What an incredible moment for Mercedes-Benz! Congratulations to our team in Brackley and Brixworth who have worked so hard to make this achievement possible, winning a second world championship in a row.”

Vladimir Putin was the man to hand the trophy to Lewis Hamilton right after the Brit won the race in Moscow. But the president wishes he left the stage earlier.

Hamilton could not keep his joy back and overreacted with his celebration while Europe’s most feared man was still up on the stage! The soon-to-be world champion opened his bottle of champagne and started splashing around. He soaked Vladimir Putin, but the president’s bodyguards soon gave him cover.