The smart way to wait for the green light: the dancing traffic lights

There are countries like Germany and Austria where people would not cross in a million years if the traffic light shows red. Not even if no car can be spotted 10 kilometers away. And then there are countries like Spain and Italy, where colors mean nothing. It’s not that they are color-blind. They just hate waiting.

But what if waiting would become interesting? Would it make any difference? Well, smart comes with a smart way of convincing people to wait for the green light before stepping on the zebra: the dancing traffic lights! 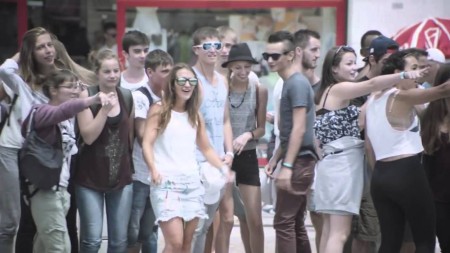 Traffic lights turned to be the most dangerous places for pedestrians. We are all too busy to wait. But once tested in Lisbon last year, everything went according to plan. Pedestrians stopped and stared at the little red man dancing in the metal case on the other side of the street, right across the zebra.

The dancing movements of the little red man were created by the pedestrians themselves, who were filmed in a booth set up in the city center. Inside the booth, there were a small dancefloor, a music player to get the pedestrian in the mood and cameras to capture the movements of the people which were transposed into those of the red man in real time.

So if you want to show up inside the case of a traffic light, you need to practice dacing along „Born to Dance” – Goldfellas.