Oldies, but goldies, literally! In the land of gold and oil, even cars dress up in metallic yellow paintwork. A Mercedes-Benz SLS AMG, first introduced in Dubai in 2009, at the bi-annual Dubai Motor Show, is all the vogue in the city where the tallest building in the world, the Burj Khalifa, pierces the ever cloudless sky.

The car belongs, as you might have guessed, to one of the super rich in the United Arab Emirates. Sporting the color of the desert sand, the Desert Gold special edition of the Mercedes-Benz SLS AMG can occasionally be spotted showing off its sensual lines along the always-sunny boulevards of Dubai. Even though it may look bizarre in Europe or the U.S., the golden SLS proudly joins the shiny armada of the chromed cars of the Middle East. 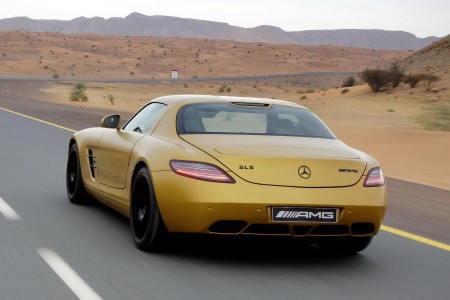 In the shadow of the only 7-star hotel in the world, the Burj Al Arab, the SLS comes with an extravagant paintwork in matt gold with contrasting glossy black accents and black AMG wheels, measuring 9.5 x 19 at the front and 11.0 x 20 at the rear. On the inside, the Arabian prince comfortably takes a seat in the sports seats, enjoying his solid carbon-fiber center console and various other carbon fiber accents that mix the sporty and luxurious dual character of the SLS 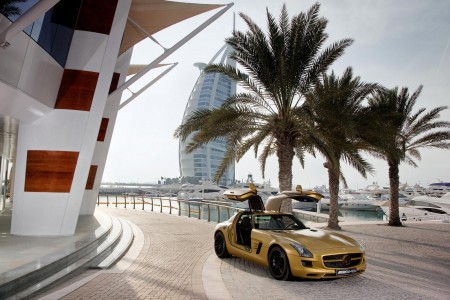 The Mercedes-Benz SLS AMG may be covered in gold on the outside, but there is the same standard engine powering the SLS: a 6.3-liter V8 unit, pushing out 563 HP and 650 Nm of torque. These are figures that help the car run the 0-100 km/h routine sprint in just 3.8 seconds, on its way to the fabulous 317 km/h (197 mph) top speed

If we are ever going to see the new Mercedes-AMG GT supercar dipped in gold, that remains to be seen. But when it comes to the sheiks of the Middle East, that is probably just a matter of time.