The Tesla Cybertruck continues its tug wars. After fighting the Ford F-150 Series, the time has come for a Mercedes to test the abilities of the electric pick-up truck.

It is not a Mercedes-Benz X-Class pick-up as expected, but the long-gone R-Class. And it is not even a real Cybertruck, but a miniture built by a skilled metalworker.

Frank Sachsenhausen, from GTA Sheet Metal, thought of the best gift for Christmas, for his son. A toy electric pick-up truck. 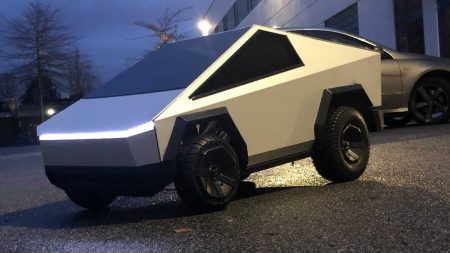 The first thing that came to their mind when the vehicle was ready, was to put it against the family’s car, a Mercedes-Benz R-Class.

Sachsenhausen used the platform of an electric go-kart on his project that started on the 11th of December. The model made of aluminum at a 1:4 scale, features two doors only and access is made through the roof. It also has functional headlights and taillights, that mimic the those of the original vehicle revealed by Tesla this past November.

Sachsenhausen has attracted the interest of many parents, who would be ready to pay the price to get e miniture Tesla for their kids. The “manufacturer” though said that it is a one-off vehicle and his son, Jesse James, is the only one to own one.