Roger Federer is one of the happy parents. He has already found the Christmas gifts for his two sets of twins. We don’t know what the girls will get, but the boys and the wife will surely be happy. The former ATP number 1 has got two miniature red Mercedes for sons Leo and Lennart. 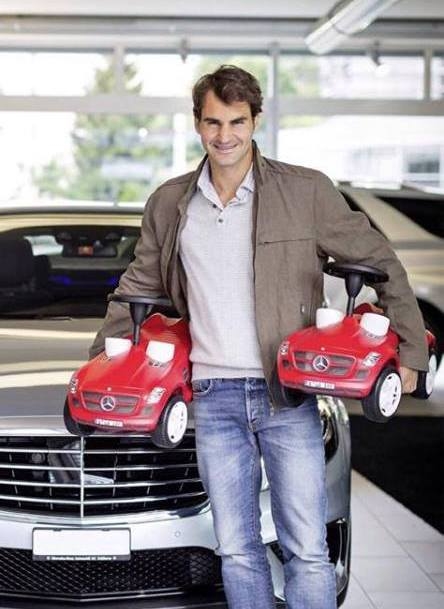 Roger Federer’s twin boys will be driving and smiling all holiday in their red convertible Mercedes. Born on the 6th of May, the toddlers are getting wheels from Santa Claus. Roger Federer, who has a long-term sponsorship deal with Mercedes-Benz, wanted his two sons to have drives similar to his. Leo and Lennart will probably just be pulled by parents in their new shiny red Mercedes mini-cars, before they realize how they actually work.

Roger Federer also has twin girls, Myla Rose and Charlene Riva, born on the 23rd of July 2009. Something tells us that they will not be interested in these cars so much.

The world number 2 is taking a break until next year, so he will be home for both Christmas and the New Year. He also has a present for his wife, the Slovakian-born former tennis player Mirka. He is already building a huge villa right on the hills overlooking Lake Zurich. The price of the half-glassed construction goes up to almost 10 million euros. The dwelling will also host the tennis player’s parents. Computer-generated images show how his crystal palace is supposed to look like in a year from now:

The Swiss has just won The Match for Africa against his good friend Stanislas Wawrinka, in front of the home crowd, in a sold out Hallenstadion in Zurich. The very sober Federer proved that he can be a joker like Djokovic, making 11 000 people laugh for more than 90 minutes.

The event raised 1 million euros. All the money goes to the Roger Federer Foundation, the organization promoting education and supporting projects in six countries in southern Africa.