How good is the new Mercedes GLC? Until to the first driving report, here is the first static comparison with its main rivals Audi Q5, BMW X3 and Land Rover Discovery Sport.

It is quite a paradox. The former GLK with its angular lines remind about the iconic G-Class. Even it had a long travel suspension, a good ground clearance and good approach and departure angles, the former GLK was not a top off-roader. Ok, it was more polyvalent than the Audi Q5 and BMW X3 which focus on driving dynamics but GLK was a real brother of G-Class only in therm of design.

Now, the new GLC came with fluid lines, approaching modern design lines of the new C-Class. But under the body we found a SUV much more prepared for off-road than the former GLK.

BMW discovered 15 years ago that 98% of the clients does not use their SUV in tough off-road and Mercedes and Land Rover has agreed with this statement. But on the other side, clients are pleased to know that their SUV has enough off-road abilities.

Dieter Zetsche, Daimler CEO, declared last week at the GLC launch ceremony: “Even if they rarely use their off-road ability, it’s an insurance policy – they like to know they can get out if the weather turns bad”.

With this idea in mind, the new GLC creates new standards in the middle size SUV segment. But before going into details, one clarification is needed. Mercedes does not consider that Porsche Macan is a rival for GLC. This role is reserved for the future GLC Coupe which will be launched next year.

Coming back to traditional rivals, let’s see what are the advantages and disadvantages of the new GLC.

The GLC has one of the best off-road aptitudes in class. Only Land Rover Discovery could match it.

Using the new MRA platform from the C-Class, GLC can be configured with pneumatic suspension in combination with an off-road package. 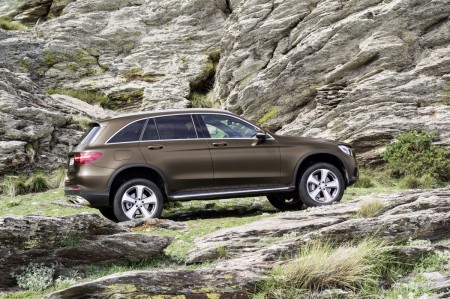 The standard ground clearance with classical suspension is 181 mm, but with off-road package and pneumatic suspension, clearance is 227 mm and could reach 277 mm in rock assist mode. By comparison, Discovery Sport has 212 mm, while BMW X3 and Audi Q5 stands at 200 mm above the ground.

On the other side, Discovery Sport record the best fording depth with 600 mm (only 300 mm for GLC even in the version with pneumatic version).

The new GLC benefits also by the hybrid construction of the body with a massive use of aluminium like in case of the new C-Class. Despite increasing in dimensions (plus 12 cm in length, 5 cm in width, 11.8 cm at wheelbase), the new GLC is 80 kg lighter than the former GLK. From the 80 kg, 50 kg were saved at the body. 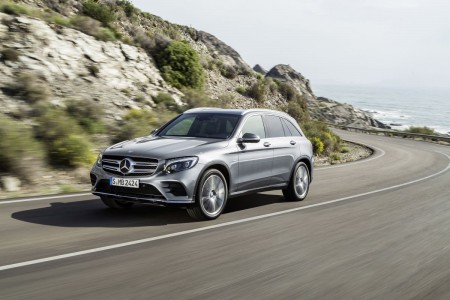 The former GLK has suffered by a smaller kneeroom and a smaller boot in comparison with its rivals. But on the other hand, the former GLK was the smallest in the class. 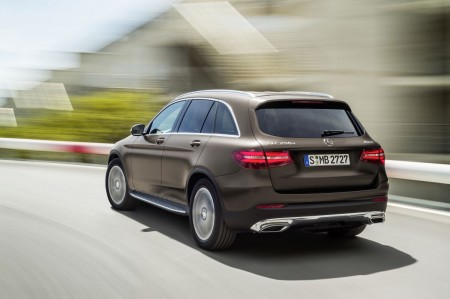 The boot volume has increased also dramatically from 470 to 550 litres while the maximum capacity reach 1,600 litres (1,550 litres before. BMW X3 offers exactly the same loading capacity in both cases 550 to 1,600 litres, while Audi delivers between 540 and 1,560 litres. Discovery Sport does not present any official figures about the boot volume but this is the only car in this segment which can be ordered with sevens seats.

For the sales start, Mercedes GLC is available with engines with only four cylinders: two diesels with 2.1 litre and 170/204 HP and the 2 litre petrol with 211 HP all of them mated with the 9 speed automatic gearbox. 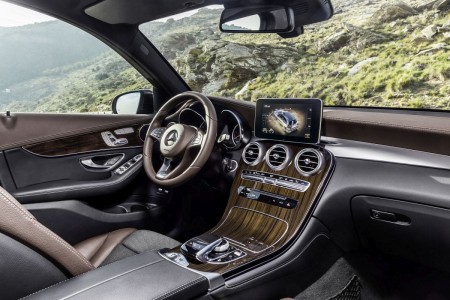 Launched half a year before, Discovery Sport has also only three engines with 4 cylindres in the same power spectrum like the GLC. Audi and BMW came with a larger versions offer. Above four cylinder versions, Audi Q5 range include two V6 petrol (S Q5 is available only for US market) two V6 diesel (including the top S Q5 TDI with 313 HP) plus a Hybrid non Plug-In Hybrid version. In case of BMW X3 you can choos between two 4 cylindre petrol engine (184 and 245 HP), a six inline petrol with 306 HP and two diesels with 4 cylinders (150 and 190 HP) and two with 6 cylinders (258 and 313 HP).

Mercedes GLC range will be completed with the GLC 350e, the first middle size Plug-In Hybrid SUV and with V6 engines petrol and diesels.

It seems to be only a formality until GLC 63 AMG with 4.0 litre V8 biturbo engines with 510 HP will get the green light. When will happen, this will be the most powerful mid size SUV.