Look what landed in Australia! Mercedes-Benz X-Class might also go to the U.S.

Once forbidden territory for the Mercedes-Benz first ever pick-up, the United States are now considered by the creators of the luxury workhorse. Launched last fall, the Mercedes-Benz X-Class was set to be sold in Europe, Australia, South Africa and South America, with the U.S. still in doubt. It has just landed in Australia for testing.

“In the past year the mid-sized truck market has come back a bit. General Motors is launching a mid-sized truck. We are watching developments very closely, and we will make a decision at the appropriate time,” says Volker Mornhinweg, the head of the Mercedes-Benz Van division. The German brand is worried that the mid-size vehicle would not be exactly a magnet for the full-sized cars lovers in America, yet is considering to build a new facility there to handle the demand if they decide to trade it in the States.

Meanwhile, the V6-powered super posh pick-up has made its way to Australia for a promotional tour, being flown across the world all the way from Germany. The move hints that the Australian market is a main target for the new vehicle. 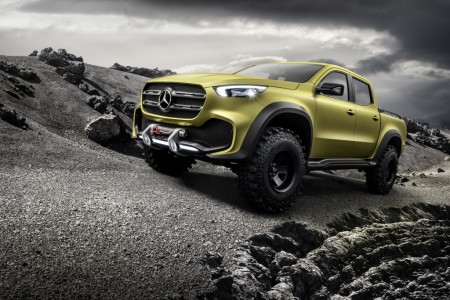 “The Concept has been flown from Germany so our dealers can get a detailed briefing about the vehicle and continue their preparation for a successful launch of the X-Class in 2018,” says Managing Director of Mercedes-Benz Vans Australia and New Zealand, Diane Tarr.

For the moment is just the concept that travels across Australia, but the real thing is expected to hit the showrooms next year.