The 2016 Phaeton is looking to overthrow the S-Class

Life at the top can get pretty lonely, as the new Mercedes-Benz S-Class can undoubtedly confirm. But with such good and caring friends like BMW and Audi, you can rely on them for company not before long. Well, if we’re to believe reports coming from the German magazine Auto Motor und Sport, the S-Class has now received a friend request in advance from the future 2016 Volkswagen Phaeton as well.

The VW flagship is rumored to pack a plethora of new technology which should put it (at least) on a par with the current segment leader, the Mercedes-Benz S-Class. This is ambitious, to say the least.

For starters, the 2016 Phaeton will be equipped with a semi-autonomous driving system which will enable the car to shuffle around without anyone on board under certain conditions (limited speed). That surely is just one of the many surprises VW has in store for us with the 2016 Phaeton (which might actually come out even a bit later, in early 2017, since the exact date hasn’t yet been set). 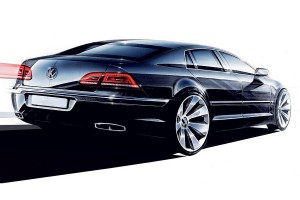 Besides technology, the Mercedes-Benz S-Class is also known for its supreme level of comfort. This is one aspect VW also seems to tackle, claiming the 2016 Phaeton will offer an even smoother ride than the luxury Mercedes. And, believe it or not, it won’t be using hovercraft technology to achieve it.

Instead, the report says Volkswagen will be employing an advanced air suspension system which will scan the road ahead with help from some cameras and sensors and will anticipate any imperfections in the surface, reacting accordingly to cancel the shock.

Volkswagen is trying hard (and succeeding, at the moment) to keep as many features secret for as long as possible, and with such big claims, it’s easy to understand why. They’ve managed to attract our interest, that’s for sure, and I’m sure we’re not the only ones. But until we’ll get to see the 2016 Phaeton, Mercedes-Benz S-Class will probably have to deal with another contender: the new BMW 7 Series. Busy times.