The Mercedes-AMG A45 S meets one of the few rivals that it has got in the segment. It is the Volkswagen Golf R. The drift war of the hot hatches is on.

They are the two most potent hot hatches out there. Rory Reid from AutoTrader put them up against each other, giving them the chance to demonstrate who’s the king on the racetrack.

They both received a 2.0-liter 4-cylinder turbocharged engine. The figures put the Mercedes one step ahead. It comes with 421 horsepower and 500 Nm of torque. Meanwhile, the Volkswagen benefits from the help of 320 horsepower and a peak torque of 420 Nm. 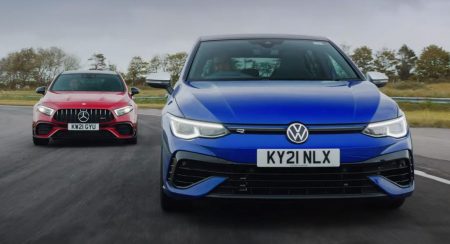 Mercedes gave its high-performance compact car a top speed of 273 km/h and an acceleration from a standstill to 100 km/h in 3.7 seconds. We could name a few supercars that don’t get to 100 km/h that fast.

Volkswagen accounted the company’s pride and joy with a top speed of 249 km/h and a run from 0 to 100 km/h in 4.7 seconds. That makes the Golf a whole second slower than the Mercedes-AMG A45 S.

On paper, it looks like an easy victory for the AMG. But will it actually be so?

The fun part is that both of them get the Drift mode. For the Golf R, it is part of the Performance Pack. It is standard equipment for the S variant of the Mercedes-AMG A45. And both get the all-wheel drive system.

Rory Reid drifts them along the racetrack, calling them “super hatches”. The cars with savage personality playfully slide on the tarmac, skid around. And that is not the only thing he tests on them. Watch the video below to decide which of the cars is better.

Next time, we’d love to see the Mercedes fight the BMW M1. That would be a fair battle.