In 2016 Mercedes launched a new family of diesel engines and the first version was a 2-liter four-cylinder OM654 debuted on the latest generation E-Class in 2016.

Now, the two new four-cylinder diesel OM 654 M (M from modified)  and petrol M 254 will be equipped for the first time with a 48-volt electrical system and an integrated starter generator. This increases the maximum power by 22 HP  and the maximum torque by 180 Nm petrol and 200 Nm at diesel Newton meters.
New engines will debut in the facelifted MercedesE-Class.

Mercedes was the first manufacturer to use the integrated starter generator (ISG)  in 2017 on the OM656 engine.
According to the name, the ISG is an electric machine that can work both as a “drive” (engine start and partial support) and as a “power generator” (generator). The purpose of this technology, which is also known as the mild hybrid, lies in the increase in comfort and fuel savings.

Thanks to the 48-volt electrical system used, the ISG can start the combustion engine much faster and more gently than a conventional 12-volt starter offerind more comfort and refinement. At the same time, the ISG is used to generate energy in drive mode and can also support the combustion engine with its torque when the power is high. Mercedes calls this “EQ Boost”.

OM654 M  and M254 have a new generation of the ISG, which is integrated in the 9G Tronic automatic transmission. The electric motor, power electronics and transmission cooler were installed directly on the transmission in order to reduce the weight of the necessary components (no cables) and to increase efficiency. These engines are very flexible and can be adapted easily for use in plug-in hybrid environments.

The M 254 four-cylinder petrol engine is a completely new development and is belonging from the same engine family with M 256 six-cylinder petrol. The two-liter machine is the successor of the M 274 and produces up to 272 hp, while the maximum torque is 400 Nm.

A special feature of this engine family is the electric compressor powered by the 48V network that is responsible for quickly building up the boost pressure at low engine speed. An overboost function allows the maximum power to be increased by a further 41 hp for up to 30 seconds when there is a high power requirement. 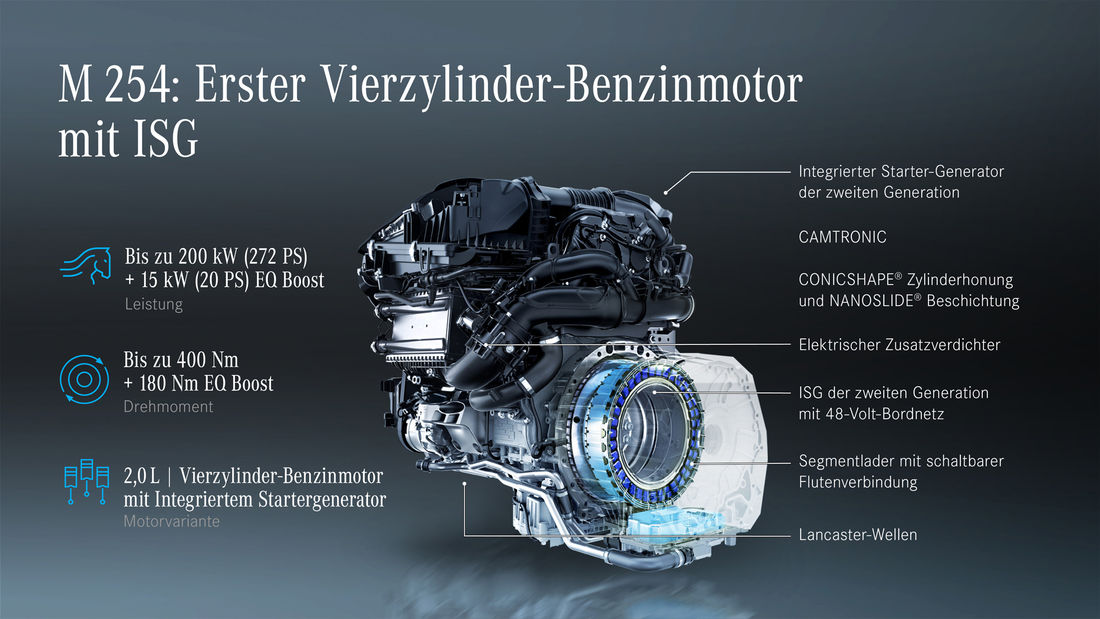 Mercedes claims that OM654 M engine is the first diesel in the world with an integrated starter generator. The revised two-liter turbo-diesel four-cylinder has  received a new  crankshaft and the displacement  has increased  by 43 cmc to 1,993 cmc. At the same time, the injection pressure is increased from 2,500 to 2,700 bar. The new engine delivers 265 HP and 550 Nm (245 HP and 500 Nm before at the old generation OM 654 in the highest performance version). On the exhaust side, a NOX storage cat, particle filter and two SCR catalytic converters were added. 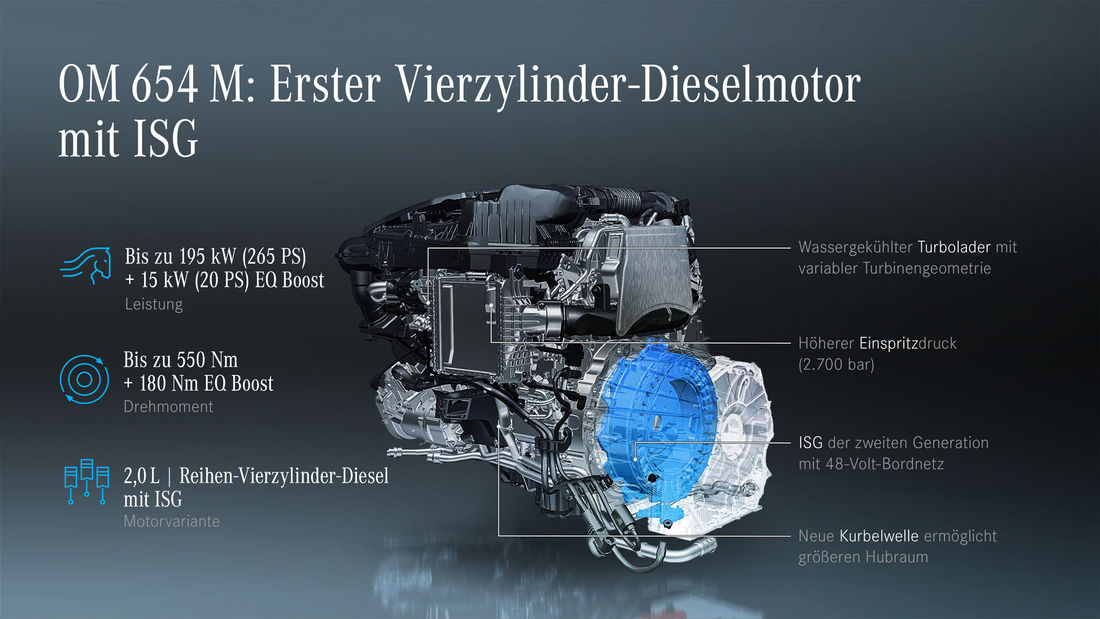 The in-line six-cylinder M256 with ISG is also used for the first time in the Mercedes E-Class facelift. In the Mercedes-AMG E 53 4MATIC + models, the engine delivers 320 kW (435 hp) and provides a maximum torque of 520 Nm. The starter generator briefly delivers an additional 22 HP and 250 Nm.