V-Class: the Mercedes of van segment

The Mercedes of the MPVs – this is how the officials of the brand decided to display it. The new V-Class transposes all that’s best in the saloon cars of the company into the MPVs for passengers transport. The first drive test.

Although it was launched in the presence of Bernt Stegmann, Head of Marketing in the commercial vehicles division, the new Mercedes-Benz V-Class is officially placed inside the Passenger Cars portofolio. Righfully as can be, since the model that genuinely succeeds the Viano brings the idea of the MPV (multi purpose vehicle) to a whole new level. The launching event happened in Germany, along an itinerary that was drawn out from Hamburg to the Sylt Island, a high-end place, especially from the perspective of fastidious accessibility (you can only get there by train).

At the very first sight, it is absolutely obvious that considerable investments, financial as much as various types of it, where placed in this automobile. If Viano was a passenger transport vehicle respecting the Mercedes-Benz standards, the V-Class is designed to be an automobile that will set the standards. I would personally dare to compare it to the R-Class, a car slightly and unjustly misunderstood by the public and which would have been worthy of a brighter career for as much as it offered. The main targets of the new vehicle are three passenger categories: the family people and the dare-devils, the business field (where it can be a company vehicle with a enhanced versatility or a passenger luxury vehicle – the so called shuttles), or for people who are into various sports and who need special mobility.

Regarding the looks, the automobile is perfectly integrated in the contemporary design language of the Mercedes-Benz, as it takes so many current details of the Stuttgart brand. Looked at from the front, you cannot but instantly assign it to the new C-Class or the GLA, but also to the master S-Class. Also from the front, the overwraught cursive lines are asserted, those that allow it to reach a 0,31 drag coefficient, in spite of the massive profile.

The consequences are firstly distinguishable when it comes to the efficiency of the new V-Class, but also to the general feeling of comfort, as for example, the rolling noise is much ameliorated (-2 dB; almost halved).

Up to eight passengers can seat inside the new V-Class, as there is a possibility for fitting in two benches, three seats each. The option, perfect for a commuting vehicle, let’s say from the airport to the hotel, has the alternative of only four rear seats, placed 2+2; the individual seats are widely generous, this is what we are talking about, as they can be displaced face to face, to create an office-like space. The feeling is rounded by the folding little table, optionally offered, on which papers and laptops can be placed (they can be charged by two drains at the rear) or on which one can eat, for example, if the vehicle is used in the spare time.
The access inside the binnacle can happen through the two sliding doors, that can be electrically controlled, by the buttons placed on them, but also by two buttons placed on the center console, handy for the driver. The tailgate can also be electrically operated. It also has the extra option to open completely or only open the rear-window, by two stages. Modular deposit spaces have been designed for the boot, as there is even the option of equipping it with folding shopping trolley carts. 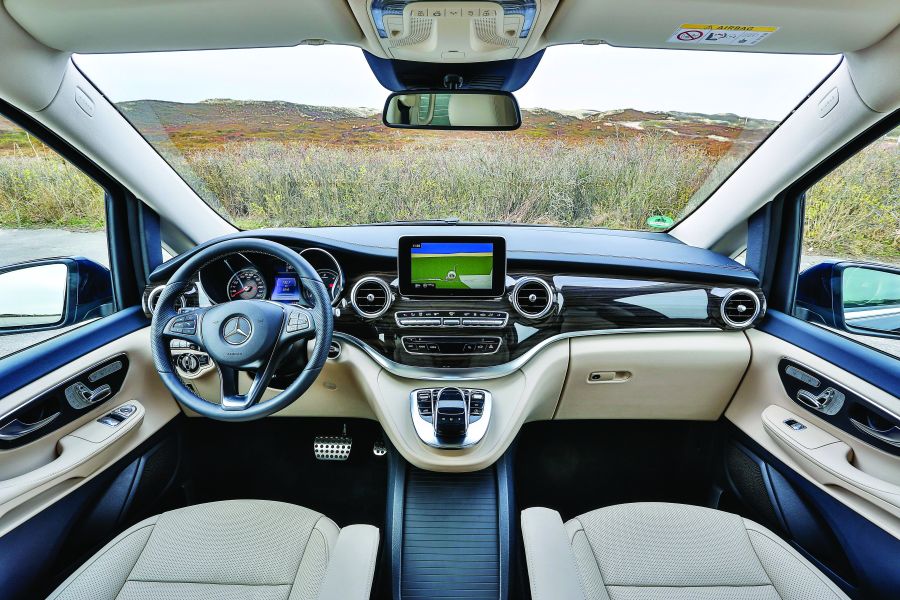 Going back to the inside atmosphere, it is special also thanks to the elaborate design, but mostly thanks to the high quality materials. Even at the rear, inside the generous equipment, the feeling is that of a luxury automobile. For a special drive experience, the automobile can also be equipped with high performance Burmester audio system, which is pure delight to the acute ears. This option comes together with an intelligent Mercedes-Benz breakthrough. Thanks to a microphone, the system can amplify the voices of the passengers (that are loudly re-echoed into the subwoofers) for a better hearing inside the binnacle, without the need to speak louder than usual.

The main exertions to refine the new V-Class were focused on the driving train. The intention was crystal clear: it required solutions to guarantee the comfort worthy of the brand, for each and every passenger, even for those seating in the third row. They succeeded, as the model is refined and quiet. An adjustable air suspension AGILITY CONTROL can optionally be set up. In tune with the new experience provided by the suspension, there is also an electrical dynamical steering system, especially gauged for the new V. This smooths the low speed drill by an extra assistance and becomes „stiff” at high speed. If the first feature is trully useful, I do have some complains about the second one, as the feeling is sometimes fake for the driver, at speeds at which you nostalgically remember the classical hydraulic steering system. But, all in all, there is nothing at fault from the driver’s perspective, as the V-Class is practically very easy to drive; more than that, it even gives you the feeling that you could effortlessly bind up hundreds of kilometers.

There is a turbo diesel engine under the bonnet, well known by the Mercedes-Benz fans. The 2.143 cc unit got some fineness adjustment to become tuned to the Mercedes-Benz standards, even when it comes to such a vehicle. Three power versions are available: the 200 CDI (136 HP and 330 Nm), the 220 CDI (163 HP and 380 Nm) and the 250 BlueTEC. We had the chance to test the former one and it is the pride of the range, because, officials say, it provides the refinement and the performance of a V6, together with the economy and the service costs of a 4-cylinder in-line engine.

The 190 HP and 440 Nm are enough for quite an agile behaviour for a vehicle that goes further then the 2-ton weight. For incessive racing, there is an over-boost function that can give extra 14 HP and 40 Nm for a limited time. Not as efficient as this engine, there is the 7-speed automatic transmission (7G-TRONIC PLUS) standardly offered in the V 250, that seems a little out-of-date. There is a certain delay, even though it is not troubling, but it is felt, by comparison to other modern versions on the market. But, if you skip this aspect and the fact that the engine is a little bit noisy, the 9,1 seconds necessary for reaching the 100 km/h speed, the Euro 6 standard and the mix fuel consumption of 8,5 l/100 turns the V-Class into an Mercedes of MPVs.

A 6 cyliner engine will not be offered due to the fact that in 2016 Mercedes will pass to the new 6 in-line generation engine and a 6 in-line cylinder engine does not fit longitudinally under the bonnet of V-Class.

Mercedes raised the standards of MPV to the level of a saloon if we speak about general noise, quality, interior ambient. The positioning in the passenger car division is not accidental or a marketing instrument. V-Class is a S-Class in his segment.

Values in brackets for automatic version; * with overboost