The first Mercedes-Benz is for sale! Well, a replica of it…

No less than 133 years have passed since the first horse-free carriage hit the road. It was the 1885 Benz Patent Motorwagen, powered by an internal combustion vehicle and patented in 1886. Only 25 such units were built. A copy of the model is now for sale.

It integrates the legend of all legends. That is how it all began. With a car that its inventor, Carl Benz, did not even trust much. Not as much as his wife Bertha did, that’s for sure. Mrs. Benz, accompanied by her two sone, left her home one night, to make it to Pforzheim, at her parents’ house. The husband thought she would not get very far, but she did and she returned as well. If you want to know how Bertha Benz felt at that time, here is your chance. A replica of the original vehicle is now for sale. 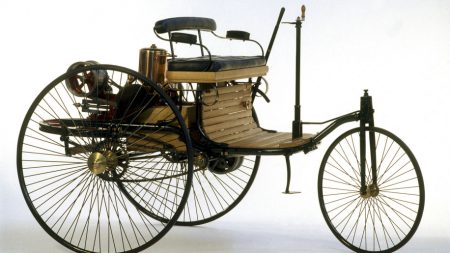 The replica was built in 2002, so it is more than a century younger than the original. It loses, of course, its legendary factor, but well… on the market of the previously owned cars, the newer, the better, right?

The model that copies the original looks every inch like the first automobile ever made. Made only for exhibiting purposes, the car though runs just as any would. Any of its age.

With a black frame and a seating area covered entirely in leather, the vehicle comes with the one-cylinder engine, capable of proving 0.75 horsepower (yes, you read that right!) and a top speed of 10 mph (16 km/h), just like the original one. That won’t get you very far, nor very quickly, but just imagine the heads turning. The Patent Motorwagen replica has been recently restored by the Mercedes-Benz Classic Center, that made it look even more like the original prototype, that Carl Benz himself donated to the Deutsches Museum back in 1906.