The Mercedes-Benz C-Class Is A Winner! Arigato, Japan!

Mercedes-Benz C-Class is the import car of the year 2014 – 2015 in Japan, where the Nipons are only calling it “Benz”. The word “Mercedes” is a bit complicated for the offsprings of the samurai warriors.

The new generation of Mercedes-Benz C-Class has been voted Japan’s best import car for 2014 – 2015. In the country that has an earthquake almost every day, a typhoon every month and a volcano eruption every year, the jury , composed mainly of Japanese motoring journalists, picked the car that celebrated its world premiere last year. Their choice was based on the technology evolution of the German automobile. “The Mercedes-Benz C-Class is a masterpiece that underscores the manufacturer’s commitment to offer its customers best possible car”, states the head of the jury, highly impressed by the Mercedes-Benz mission to improve vehicle safety and reduce the number of traffic accidents with the new assistance systems and extended functions.

It is not the first award for the C-Class in 2014. Only three weeks ago, a jury of experts awarded the Benz model one of its highest “Best of Best” prizes: the C-Class got one for exterior design. So right now, the Stuttgart based brand can also say: Arigato, Japan!

Read here about the award received by the C-Class! 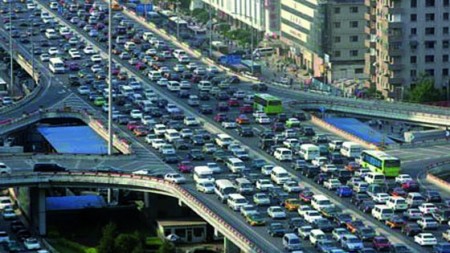 And let us bring you an interesting information from the Land of the Rising Sun. In Japan, where drivers ride on the left side, they are taught that the traffic lights are red to stop, yellow to pay attention and blue to go, although the light looks as green as can be! And they are not allowed to push the pedal to the metal not even on the highway. The maximum motorway speed is 100 km/h in Japan. And it’s not like they have a reason for it anyway. Sometimes, commuters spend three hours in highway traffic jams.