Mercedes-Benz is disclosing the new C-Class Cabriolet inch by inch, ahead of its Geneva debut. Just minutes ago, a new black and white photograph of the new dream car from Stuttgart surfaced online.

The picture shows the Mercedes-Benz C-Class Cabriolet with its canvas roof down, curiously sneaking into the world that is ready to receive it. A diamond grille with a single louver, widely gaping air intakes, a finely sculpted bonnet and 5-spoke wheels are pretty much all that the photograph reveals. Still, the rear design of the new drop top is no secret, after Mercedes-Benz posted a photo of it coming out from underneath the cover just one week ago. 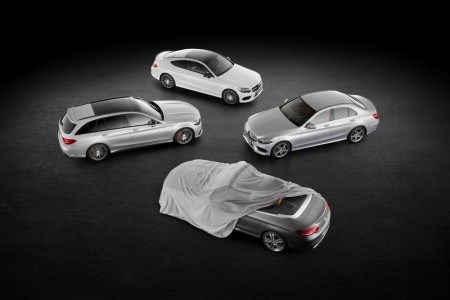 In the “Year of the Dream Cars”, as the reps of the premium carmaker in Stuttgart are calling 2016, the convertible is set to join an exclusive entourage made up by the smart fortwo cabriolet, the SL, the SLC and the AMG S 65 Cabriolet.

A C 300 version will likely be revealed first, sporting a 2.0-liter 4-cylinder engine developing 245 HP. But the brand is saving the best for last. The Mercedes-AMG C 43 and C 63 versions will follow shortly with a power boost under the hood: the 3.0-liter V6 roaring out no less than 367 HP and upgraded chassis performance for the mid-level C 43 and the 4.0-liter biturbo V8 boasting roughly 510 HP for the performance-oriented C 63. A C 350 Plug-In version is also expected to show up later on.

The C-Class Cabriolet comes with a soft top, unlike its convertible rival, the BMW 4 Series, but similar to the open-air Audi A5.

The first ever convertible set to bear the C-Class badge will show up online in all its glory less that 3 days fromnow. The Cabriolet will have its public debut e on the 1st of March in Geneva and is going to hit the showrooms next autumn.