2016 has been the year of the dream cars indeed, as Mercedes had anticipated by the end of 2015. The Stuttgart-based grand brand has sent onto the roads and in the off-road as well, no less than 20 cars in 365 days, becoming the most productive car brand of the year.

Mercedes-Benz started 2016 en fanfare: with the most intelligent business sedan that ever set wheel on the road. Everything was new about the 2017 Mercedes E-Class: the fresh multimedia concept, the modern platform, the extensive range of safety and assistance systems and the new 4-cylinder diesel engines generation. 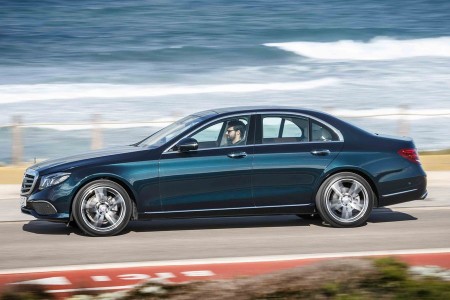 Critics went as far as saying that crashing the car is next to impossible and it is as safe as no other vehicle before: Active Brake Assist, Evasive Steering Assist, Remote Parking Pilot, PRE-SAFE® impulse side, PRE-SAFE® Sound make it so.

The Mercedes-Benz C-Class Cabriolet, shining splendidly in the first official photo gallery, came to fill a historical gap in the Mercedes portfolio, since it is the first ever C-Class badged convertible. Mercedes-Benz proudly presented the first cabriolet based on the C-Class range, at the Geneva International Motor Show 2016.

Featuring plenty of high quality details, its distinctive character is most apparent when the soft top is dropped. The interior is based on that of the C-Class Saloon, but brings a fresh interpretation with typical cabriolet features.

The new Mercedes E 43 AMG 4Matic is powered by an upgraded 6-cylinder engine. The new unit holds extra power, going 34 HP up to 401 HP. With the upgraded engine, E 43 AMG 4Matic reaches 100 km/h from a standstill in 4.6 seconds, while the top speed is electronically limited to 250 km/h. 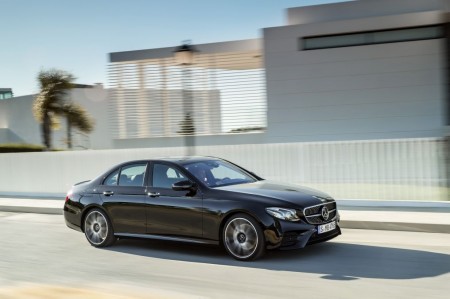 As in all AMG Sport Line models, the formula is one and the same, featuring the 4Matic all-wheel drive and the 9G-Tronic automatic transmission as standard.

The hottest GLC, which essentially makes it the fourth model already to skip the AMG Sport Line designation in favor of the the full Mercedes-AMG lettering, saw the light of day in March. 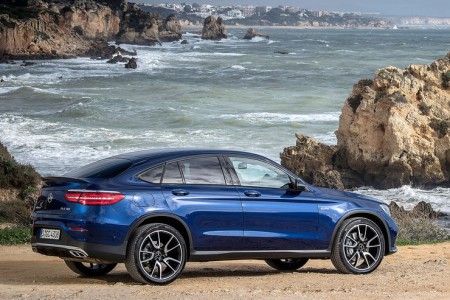 Under the hood, there is the familiar 3.0-liter biturbo V6 rated at 367 HP and 520 Nm, sent to all four wheels via an 9G-Tronic transmission. The sprint to a speed of 100 km/h is run in 4.9 seconds, before the Mercedes-AMG GLC 43 4Matic hits an electronically limited top speed of 250 km/h.

After the B-Class and A-Class had undergone cosmetic surgery, Mercedes went on updating the most stylish members of the compact range: the Mercedes CLA and the CLA Shooting Brake. 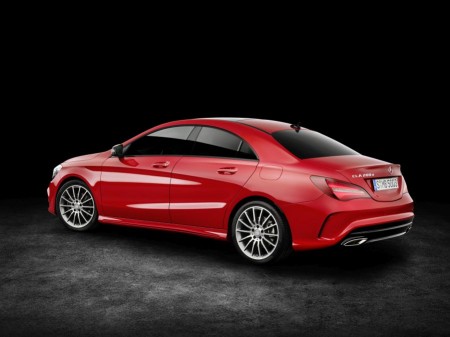 The design changes have subtly targeted the distinctive look of the CLA and CLA Shooting Brake. All models now feature a diamond radiator grille in black as standard, plus a new front bumper, while the tailpipe trim panels are now integrated flush into the bumper.

The game is on! The car meant to fight the bulls in the arena of the SUV Coupes came into the world in March. One year after the presentation of the concept bearing the same name at the Shanghai Motor Show in 2015, the Mercedes-Benz GLC Coupé comes to reunite the super sporty genes of the coupes with the robustness of the SUVs.

The basic structure and the stretched greenhouse of the series production car remain basically unchanged. The new Mercedes-Benz GLC Coupé comes with the sports suspension, the DYNAMIC SELECT  and 4MATIC system standardly fit, as the 9G-TRONIC automatic transmission finds room in the SUV Coupe as well.

140 extra millimeters of length and wheelbase. Extra space. Extra comfort. Extra intelligence. The long-wheelbase version of the E-Class has been presented in China, at the 2016 Beijing Motor Show. The limousine built in China for China is a stylish reinterpretation of superiority. 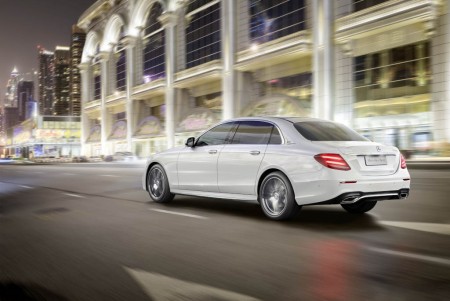 The long-wheelbase version of the recently launched in Europe E-Class brings the first-class character and exceeds the dimensions of the European E-Class Saloon, featuring a wheelbase of 3,079 millimeters and a 5,063 millimeters length. An extra triangular window has been added in the C-pillar, together with a stretch roof profile. The elongated hood, the coupe-like roof flowing into the broad-shouldered tail end give the limousine an elegant yet exciting silhouette.

It was the car that brought summer faster than expected! It was the new Mercedes-AMG C 63 Cabriolet, the high-performance convertible of the C-Class range, with none other than he AMG V8 engine purring under the hood. 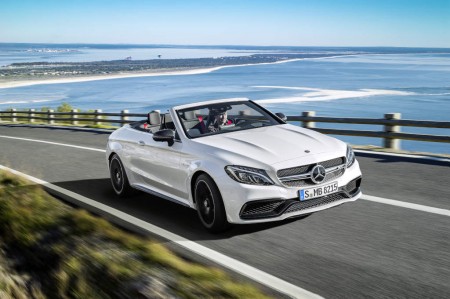 The biturbo engine also used for the super GT of Mercedes-AMG comes in two variants: with 476 HP and with 510 HP, the latter being reserved for the S variant. And it stands proudly as the only one in the segment with an 8-cylinder biturbo engine, that throws the car straight to its electronically limited top speed of 250 km/h or 280 km/h, when fitted with the AMG Driver’s Package.

It comes from hell and it promises heaven! The Mercedes-AMG GT R has just been released on the racetrack.  The pure-bred sports car Mercedes-AMG GT R, with racing DNA, marks a milestone in driving performance, as it is nothing less than the street-legal version of its racing sibling, the GT3. 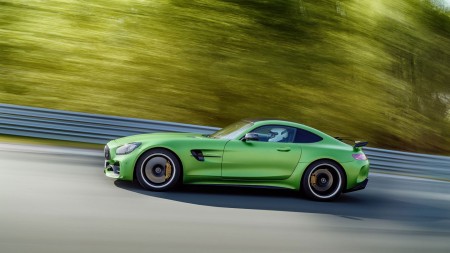 The new Mercedes E-Class Estate sets a new standard within the large class premium estates, with the biggest boot in the segment. The interior is similar to that of saloon. The instrument panel can be ordered with two optional wide, high resolution displays, each with a 12.3 inch screen diagonal. 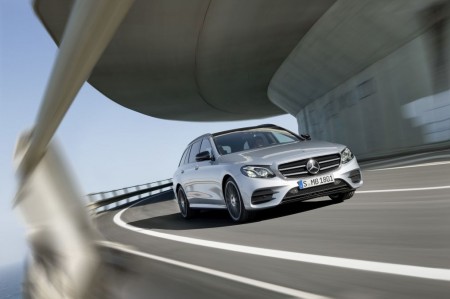 The smart brand is the only car manufacturer in the world to offer its entire model range also in electric versions. The entire electric family made up of the smart fortwo, the smart forfour and the smart fortwo cabriolet, went to Paris in late September. 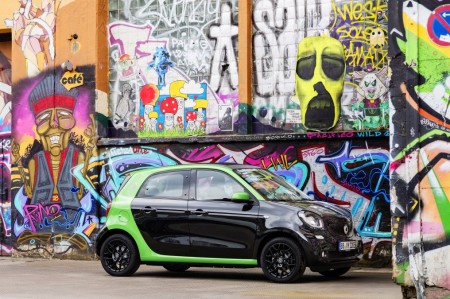 The rear wheel drive and the rear-mounted engines seem to be the perfect combo for the electric drive system of the car that premiered in Paris. The Daimler subsidiary Deutsche ACCUMOTIVE supplies the battery that powers the smart electric drive, while the electric engines are manufactured in Cleon, France, at the Renault plant.

Just like its predecessor, the Mercedes SLS Roadster, the AMG GT Roadster bears an electrically operated fabric top which opens or closes in 11 seconds, up to 50 km/h. 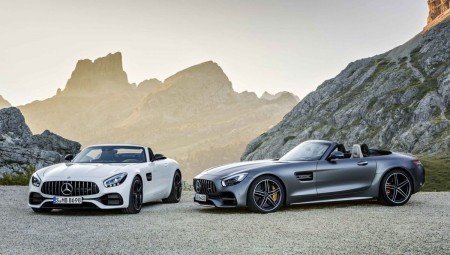 The entry-level Mercedes-AMG GT Roadster is powered by the familiar 476 HP and 630 Nm 4-liter biturbo V8. This takes the Roadster from a standstill to 100 km/h in 4 seconds all the way to a top speed of 302 km/h. There is also something beyond that, which goes by the name of GT C, with 557 HP. It needs just 3.7 seconds to go from zero to hero, up to 316 km/h maximum.

With the 4MATIC all‑wheel drive as a standard feature and increased ground clearance thanks to the AIR BODY CONTROL multi-chamber air suspension, the All-Terrain is the car willing to run on the unpaved roads, go on family roadtrips and take routes where conventional estates would never dare. 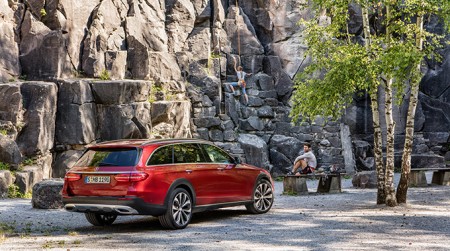 The E-Class All-Terrain is 29 millimetres higher than the E-Class Estate. The ground clearance is 121 to 156 mm, depending on transmission mode and driving speed.

The SUV coupe comes with its unmistakable design, as the high-end fusion of sporty character and elegance, a combination that turns it, despite its dimenssions, into a thoroughbred performance car. 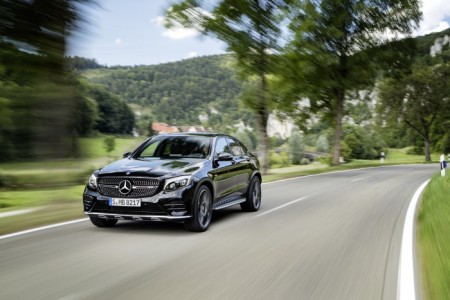 Powered by the 3.0-liter V6 biturbo, developing 367 HP and a 520-Nm maximum torque, the GLC 43 4MATIC Coupé runs from a standstill to 100 km/h in 4.9 seconds on the way to its top speed electronically limited at 250 km/h. The new GLC 43 4MATIC Coupé is equipped with the 9G-TRONIC automatic transmission, retuned for a more dynamic driving experience. The AMG engineers have managed to reduce the shift times of the 9-speed transmission by dedicated software application.

There they are, the most powerful E-Class models of all time: the Mercedes-AMG E 63 4MATIC+ and the E 63 S 4MATIC+. Powered by the already familiar 4.0-liter biturbo V8, the company’s daredevils benefit from 571, 612 HP respectively. It only takes the top variant 3.4 seconds to hit the 100 km/h speed from a standstill. 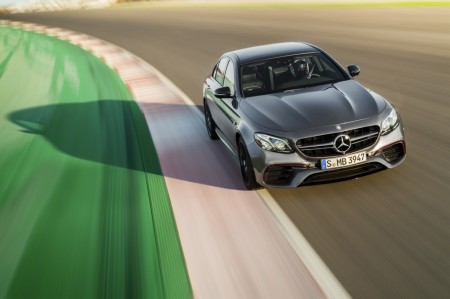 This is the ultimate open-air experience: the most luxurious Mercedes convertible ever built. The Mercedes-Maybach S 650 Cabriolet is powered by the 6.0-liter V12 engine with 630 HP. It is an exclusive model, that will mostly find room in the exquisite collections: only 300 units shall be built. 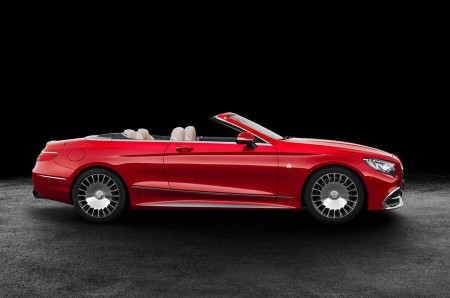 The convertible Maybach heavily relies on the drop-top S-Class in terms of proportion, but exclusive Mercedes-Maybach features have been fitted in it. The first ever Maybach cabriolet will hit the market in the spring of 2017. The 300 units that will go on sale will each have a net tag price of 300,000 Euros.

It looks Exciting, Elegant, Exclusive. It is the new Mercedes-Benz E-Class Coupe, the latest member of the E family that sees the light of day after the sedan, the Estate and the All-Terrain models. The Coupe comes with all the assistance systems fitted in the previous variants, but with the typical coupe sporty proportions. 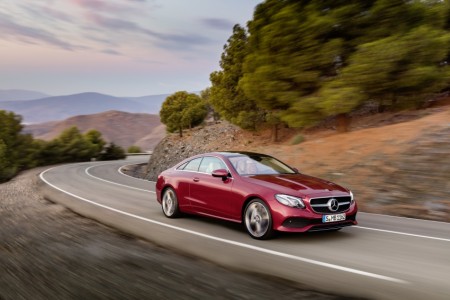 Technically based on the Saloon, the E-Class Coupe highlights the reduced lines and sensual design that fit its luxurious, yet athletic personality. A distinctive front end with a low-positioned sports grille and a central star, the elongated bonnet with powerdomes, a rearward-shifted greenhouse and a muscular rear end with two-part flat LED lamps make up the clear forms of the Coupe. In terms of power, at the market launch, there will be one diesel and three petrol engines, with a range output between 184 and 333 HP. Further engine options and the 4MATIC models will follow shortly.