The new Mercedes-Benz C-Class family has come into the world accompanied by the company’s strong promotion campaign. “Never stop improving” is the motto of the series that star tennis player Roger Federer.

The campaign is based on an analogy between the world’s best sportsmen and the four C-Class models, Saloon, Estate, Coupe and Cabriolet.

“This is the sportiest and most dynamic C-Class of all time. The campaign therefore very fittingly shows our best-seller in a sporty and dynamic setting, where it has no need to shy away from comparison with the world’s top athletes. This is also partly what makes it so attractive to younger target groups”, says Natanael Sijanta, Director Global Marketing Communications Mercedes-Benz Cars. The campaign will run on the Mercedes-Benz online and social media channels. 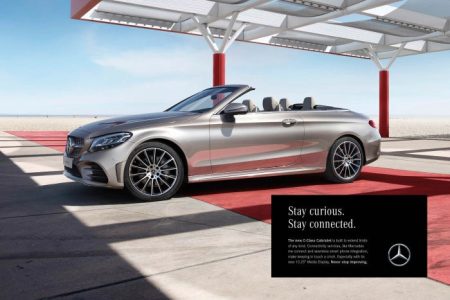 The TV commercial shows the strive for better of the best athletes and the C-Class models. The technique used for the video is the “Match Cut”, a dynamic video editing procedure that integrates visual transitions between two different worlds, with the action speeding up, then starting at a normal pace. The film stars professional tennis player and Mercedes-Benz Brand Ambassador Roger Federer and the South African star sprinter and Mercedes-Benz brand friend Akani Simbine. The two take un unconventional training scenarios, such as computer-assisted serve practice or night-time sprint training. Hip-hop music performed by a German-Ghanaian artist Serious Klein make up the soundtrack of the video and underscore the cultural mix. 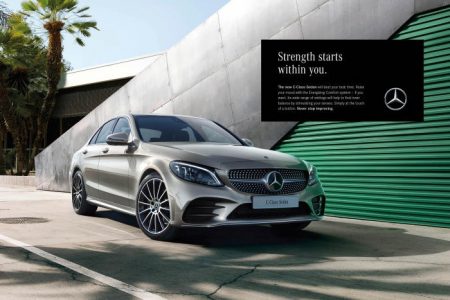 Grammy Award winning duo “We Are From LA” created the TV ad. A 75-second long version for use on the social media has also been created together with the 30-second TV ad. The campaign also includes four films of 15 seconds each.

A web special and a series of print motifs make up the promotion campaign of the mid-size automobile that is currently being built on four continents: at Bremen in Germany, in East London in South Africa, at Tuscaloosa in the United States and in Beijing, China.