Oh, dad, won’t you buy me a Mercedes-Benz? Floyd Mayweather’s 16-year old son needn’t even say it. He already got the car for his birthday. The Mercedes-Benz C-Class is the teenager’s first car.

Floyd Mayweather is inches away from getting the “dead of the year” award. Just retired, the legendary boxing champion knows exactly how to invest the money he earned fighting. He has just spent $46 000 (43 000 euros) to surprise his teenage son, Koraun, just turning 16. That was just pocket change for the record holding former boxer called “Moneymaker”. The American former professional boxer has an estimated net worth of $650 million as of June 2015, according to The Richest website. In 2014, Forbes magazine listed him as the world’s best paid athlete.

Mayweather put a huge silver ribbon on the hood of a black Mercedes-Benz C-Class Coupe and parked it in the driveway to surprise his teenage son. 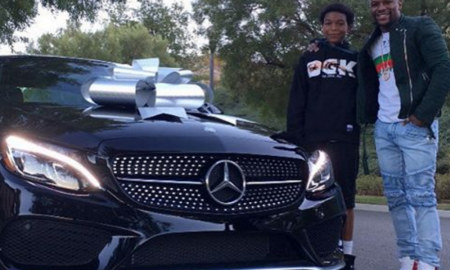 “Happy birthday @KingKoraun Amir Mayweather. Love you, Champ”, the father proudly took it to his Instagram page. For the moment, 16-year old Koraun can only drive his new Benz under adult supervision.

From now on, Floyd Mayweather will have plenty of time to search for presents. He announced his retirement last month and his manager Leonard Ellerbe confirmed it, as he tweeted: “Floyd Mayweather is RETIRED, end of discussion.” So… what will he buy for Christmas?

One year ago, for his 15th birthday, Koraun got a Bentley from his very generous father. Not a real one, though, just a golf cart in the shape of the premium limousine. No information on the price of the buggy though. 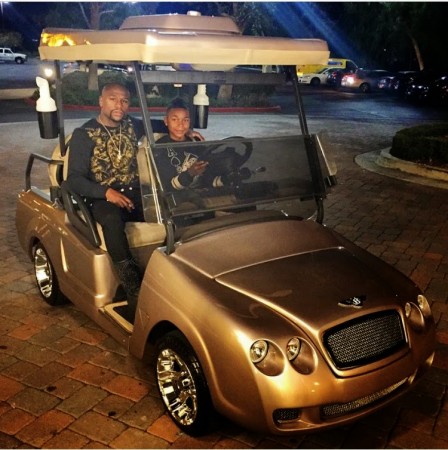 The almighty king of lavish spending has different tastes in cars: he has recently bought a Mercedes-Maybach S600. His car collection is rated at about $6,2 million.

“It took me 19 years to get there, but they will talk about it forever”, this is how Mayweather defines his time spent in the boxing ring.