Mercedes-Benz presents The Carousel of Hope

Mercedes-Benz presents the Carousel of Hope Ball, that can be referred to as “The Oscars of Charity”.  The 27th Gala that has a philanthropic and lavish reputation took place on 11th October, at Beverly Hilton Hotel.

Thirty-seven years after its founding, the Children’s Diabetes Foundation, which is supported by many celebrities, has raised over $80 million from this charity ball. The Carousel of Hope, the charity event, is hosted by Barbara Davis and it is presented by Mercedes-Benz. Diane Keaton, Quincy Jones, Barry Manilow and Larry King are some of the Hollywood legends who came to the charity event. Barbara Davis Center for Childhood Diabetes was voted the number one leading and care and research centre for type 1 diabetes.

For the sixth time consecutive, Mercedes-Benz is the presenting sponsor and the Carousel of Hope has featured once-in-a-lifetime performances by Sting, Elton John, Paul McCartney, Frank Sinatra and many others.

It was founded 37 years ago by Marvin and Barbara Davis in honour of their daughter Dana Davis, who was diagnosed with type 1 diabetes at age 7. Over 6,000 children and adults with type 1 diabetes from around the globe visit annually for specialized care, but the centre also treats children with type 2 diabetes, forms of the disease that are increasing at an alarming rate. 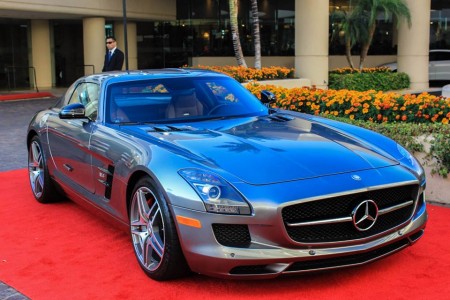 The Beverly Hilton Hotel was decorated with white horse ornaments and, obviously, marvellous carousels. Guests were first greeted by a Mercedes-Benz that was parked on a miniature red carpet outside the hotel, as you can see from the picture above.