Mercedes-Benz has just released a video to show the surprise party for the birthday boy, the everlasting Sprinter van. Everyone’s invited to the party!

The iconic van from Mercedes-Benz has been leading the way for two decades now. Ever since 1995, it’s been twenty years of hard work, so now, on its 20th anniversary, it has to party even harder.

The new Mercedes-Benz video shows an outdoor concert with smoke, confetti, fireworks, people laughing, clapping hands, singing and dancing and, of course, taking selfies, as this is surely a moment to remember. But everything is stuck. Stuck in time. No one breathes, nothing moves an inch.

And then there is something that breaks the spell.

The Mercedes-Benz Sprinter 20 Edition drives away from the party. It’s got work to do as it has done every day of the 20 years of innovation leadership.

To celebrate the special anniversary year, a special edition model is coming out under the name of “Edition Sprinter”. Only 2000 units will be built to be on sale in 19 European countries, from Sweden to Spain and from France to Hungary. 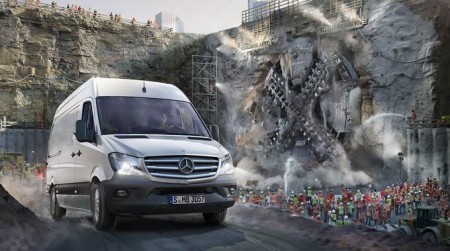 All engine variants will be available for the reliable business partner on wheels. The vehicle comes with integrated satellite navigation, air-conditioning, chrome grille positioned between the bi-xenon headlights, driver’s comfort seat and 16-inch light-alloy wheels (17-inch wheels, also available). The elegant Brilliant Silver Metallic paintwork is used for the first time in the model’s history.

So let’s party with the Sprinter! Everyone is invited!