The Mercedes-Benz 600 Pullman Landaulet used by Queen Elizabeth II during her historical visit in Germany on May 18, 1965, is up for sale. It was the car that picked Her Majesty and Prince Philip from the Cologne-Bonn Airport and took them to their appointments in Berlin.

Elizabeth II was then the first British royalty to visit Germany for the past half a century. The 11-day visit was part of a reconciliation plan between the two European giants.

The exclusive limousine with just 5,299 km (3,292 miles) on the odometer, was put on the market by the Mercedes-Benz expert Mechatronik, with the price available upon request.

The car is virtually new, since it underwent major restoration processes in Germany in the late 1980s and early 1990s, getting back its original paintwork and wrapping its seats, with a face-to-face layout, in Cognac leather. 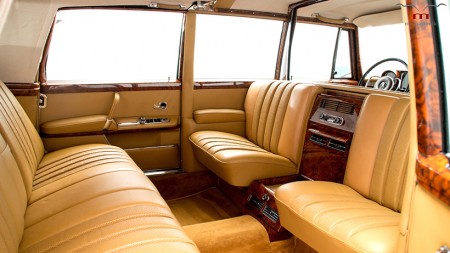 2,677 such units were built, 59 of which being Landaulet versions. The model, fitted with an automatic transmission, in which Queen Elizabeth was chauffered around Germany, had seen the light of day just one year prior to her visit, in 1965.

The limousine shows up in the following video: